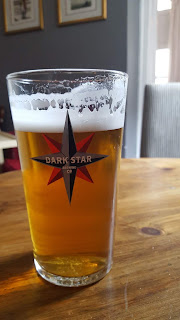 Readers of this blog know I have shall we say, some issues in finding top quality cask beer in London. It always puzzles me why. Apart from the obvious antipathy to keeping cellars at the appropriate temperature of course. I get that. Not why they don't, just the fact that they don't. Let's be quite clear here. Too high temperature buggers up cask beer. You start off wrong and there  is no way back. Chemistry and all that.

I've been down in London helping my friends Annie and David with their beer festival at the Dispensary in Leman St. It's my local when down here and though not far away at all from Tandleman Towers South, it isn't the nearest pub, but it is the one where the beer is kept properly.  The cellar is kept at around 10 -12C and the beer is properly conditioned. Even without a sparkler, it sparkles. Just look at the photo of London Brewed Dark Star Hophead. Perfect.

I've looked after the stillaged beers in the bar. They are cooled and could do with being a little colder - but that's just me - I'd much rather have colder. Beer warms up. Customers have been fine with them and the beers are in great nick. How? Simple. Keep the bloody condition in them. Avoid soft spiles for a start. Most modern beers don't need them and they bleed condition. Porous hard spiles are the cellarman's or indeed cellarwoman's friend.  Keeping cask beer is not, despite what some would tell you, difficult. It just needs common sense and a little know how.

As long as you follow a few basic rules that is. They all begin with C. Cleanliness, condition and cellar temperature are the basics. The other is somewhat contrived, but is chronology. Time. Rack the beer to settle. give it a day at least. Vent when the beer has rested. Know when the beer went on and when it ought to be sold by. Nobody wants knackered beer and that can happen even if otherwise the basics have been observed.There is a bit more to it of course, but follow these guidelines and experience will provide the rest - or the questions that you need to ask.

The final C is for check. Check the beer before serving and at intervals. The last person that should find out a duff pint has been served is yet another C. The customer.

Reckon you can't afford to keep your cooling on?  False economy. Put a few more pence on a pint rather than do that.

Fullers seem to have done a smashing job matching Hophead at Chiswick. Well done on that one.

Anonymous users are encouraged to register a name or to at least display one.