The Start of the Revolution? 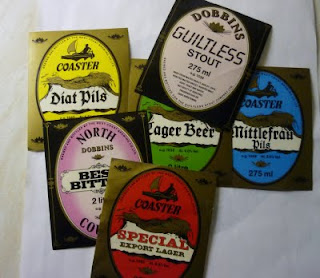 Not many who read this will know of Brendan Dobbin. Many will know of the Marble Arch and the Porterhouse Breweries though. Brendan designed both of them in their original incarnations. He was an advocate of heavy hopping and more than that, long before it became a usual thing to do, twenty years ago, he used American and New Zealand hops in his brewery in the bowels of the King's Arms in Chorlton-on-Medlock, Manchester. (That's the rough one, not leafy Chorlton-cum-Hardy in case you are wondering.)

I knew Brendan a little as he supplied the pub I used to drink in, which sold among other beers of his, Ginger Beer, a forerunner of many. His bottled lagers (all done laboriously by hand) were interesting too (the diat pils had an OG of 1040 and an ABV of 5.5%) and his Guiltless Stout cocked a snook at a certain large Dublin brewer. His Sierra Nevada Pale Ale, later changed under threat of legal action to Yakima Grande was the stuff that set him out from the crowd. If you tasted it, you'll remember it. He even brewed an ESB as I recall. Famous "scooper" Gazza Prescott, now of Steel City Brewing rightly has him down as one of his "hop heroes". You can read what Gazza says here. There is also some interesting background about the area the pub was in. If anything Gazza is kind to it. It was decidedly scary.

The guy was a legend and still consults and builds breweries apparently, though he was also known to be growing bananas in Ireland! Why this nostalgia? The labels again. When I visited Brendan many years ago for a tour round the brewery, he gave me a few labels. Some of them are in the photo.

So was the micro brewing revolution started by Brendan Dobbin? Maybe not, but he was a pioneer and where he went, others have followed.  That's worth raising a new world hop filled glass to surely?

Guinness took Brendan to court for alleged infringement of copyright. Read about that here. I won't spoil it for you by telling you who won.

Labels: All Our Yesterdays, labels
Email ThisBlogThis!Share to TwitterShare to FacebookShare to Pinterest

Remember Brendan well and drank lots of his beer in the old Beer House. Visited the badlands of Chorlton just once to sample the beers at source. It's a scary area so we never went back. I think he used to get his barrels nicked from the brewery about once a month!! Great beer though.

Speaking of American hops, I got me some Citra and Amrarillo (leaf, of course!) last week and am beginning to experiment with them as flavour & aroma, with Centennial for bittering. Nothing ready to taste just yet though.

The Citra gives off a nearly motor-oil-y aroma tinged with peaches when it goes in the kettle. Interesting.

That's the badlands of Chorlton-on-Medlock, which is rough as a badger's rear and kept its suffix, as distinct from Chorlton(-cum-Hardy), which isn't and didn't - and which is also where you can find the Marble's suburban tap. Which used to be an offie, selling most of Mr Dobbin's unfeasibly wide range of beers. I still have fond memories of his alcoholic ginger beer - Marble Ginger 6 comes close, but doesn't quite match it.

Nice piece by Mr Prescott, who I don't usually agree with. I'd forgotten all about the Chinese Pale Ale; I remember it being marketed* as a locally-brewed alternative to Tsingtao (because, well, why not), and as such I thought it was terrific.

Yes, the King's Arms in C-on-M was an estate pub, and it was a long way from being the nicest example of estate or pub: think fluorescent lighting and formica tables. And, behind the bar, a stupendous range of beer. If you've ever been to the King's Arms in Salford, you'll know how dog-rough an area it looks as if you're getting into and how uncomfortable the pub looks like it's going to be, and you'll know that the pub overturns all those expectations. Brendan Dobbin's King's Arms, unfortunately, didn't.

Me again - sorry, forgot my footnote.

*When I say the beer was 'marketed' in this way I basically mean that's how it was described on the label; with a very few exceptions that was all the marketing Brendan Dobbin's beers got. He was a hard brewer to keep up with, and ultimately it got rather frustrating - if he'd slowed down a bit on the "new and interesting beers" front and hired someone to do some proper advertising, things could have been different. At least, a few more people could have heard of him!

I too ventured out into the badlands...only once! It was mid day and on my own I felt slightly uneasy, but wow was it ever worth it. Brendan is one of my all time hop gods, he inspired me so thanks to Brendan even though I never met him in the flesh. Tara

I had the great fortune of working with Brendan at the Kings pub/brewery in Ardwick Green, Manchester in the late 80's. he was/is a great guy and his beer was second to none, would love to catch up over a pint one day.
Regards
Kris Wetton
Western Australia

I used to work for Brensan in those days , they were happy days