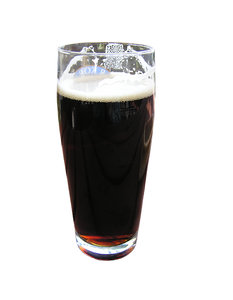 I have noticed that some pubs and publicans have decided, now that the weather is colder and nights are drawing in, that a dark beer, or sometimes several dark beers should replace lighter "summer" offerings. This seasonality seems logical enough to them presumably, but speaking as someone that likes his quaffing beer pale and hoppy, I don't see it that way.

While I have no objections at all to a handpump in a multi pump house being dedicated to something dark, I do have severe objections when the change of seasons means a gaderene rush to choice limiting dark beers, that are often much of a muchness. While I am at this theme, why are there so many awful porters about at the moment? Equally why are there so few decent bitter stouts around?

I do like dark beers, in fact I love them, but they need to have character. Just making a bland dark beer doesn't cut it for me at all and in my view, a pale hoppy beer is essential at all times in most pubs. (I also have long harboured the belief that brewing faults are far more easily hidden in darker beers and that isn't welcome either.)

What do you reckon?

With Brewers Gold, Cascade, Centennial, and Chinook, I think it lives up to its claim of being a Black IPA.

"I also have long harboured the belief that brewing faults are far more easily hidden in such beers and that isn't welcome either."

I think it probably depends on what the fault is. I've always found dark beers easier to brew, but that's because London has water well suited to dark beer. Maybe if I lived in Pilsen, it would be a different story. I think intensity of flavour is key in how many faults you can mask, but that's not limited to dark beer.

Definitely a black IPA and one of the best examples I've tried, had a great pint of it on Saturday at Belfast beer fest.

Is roast malt appropriate for a black IPA?

From ratebeer: "An emerging beer style roughly defined as a beer with IPA-level hopping, relatively high alcohol and a distinct toasty dark malt character. Typically lacks the roastiness and body of a strong stout and is hoppier than a strong porter. "

Better get that hoppy pale situation sorted within the coming week!

One of each colour, all year round, will do us nicely. It's the bloody pumpkin beers and Scary Bob Ale-oween Bitters we can't be doing with.

Most of the Black IPA's I've had tasted like Stouts. There are plenty that do include roast malt.

My beef with dark beers is that so many of them are too thin to be enjoyable - they need body to work. A pale and hoppy beer, for some reason, and get away with less body as long as it's crisp and hoppy.

I rarely choose a dark beer over a light one in the pub but I do like to see variety on the handpulls.

There is always the golden loveliness of lout.

I do find the concept of a black pale ale rather odd.

I'm with Nev: if it's dark by definition it can't be a pale ale.

There are some fantastic medium to dark malts around especialy the Belgian & German malts, most dont have the balls to experiment with them. If they did we wouldnt be moaning about the bland darker varients out there.

Couldn't tell you what Proper Black is in terms of beer type. It's absolutely delicious - best of all the current Wetherspoon festival ales I've tried so far.

Astonished the bottled version is in a clear bottle though. Bizarre choice.

With you on mediocre "Porter". Lot of it about - a couple of examples in the Wetherspoon fest as I recall, actually. Roll on Fuller's London Porter making its first appearance round these parts.

I'm with you on this Tandy, but on a slightly opposite way round. I love my dark beers, but usually find it quite hard to find many during the summer months (apart from bottles) I think there should be a good choice of dark to pale beers all year round.

I've said my thoughts on Proper Job - but I agree totally that, whilst embracing seasonality in Beer (after all, that's part of the fun of it), there's nothing worse than an imbalanced Bar - be it all pales, or all darks. Variety is the spice of life when it comes to beer.

Black and Brown IPA's have become all the rage with American Craft Brewers. This is in fact a direct response to what some, not I, would perceive as bland, boring roasted malt ales being brewed in the UK. I believe that both styles have their place in the beer world and I for one have no problem drinking a hearty Porter in the middle of summer.
Cheers!
Beerattitude

The opposite pisses me off. In the summertime many of most landlords don't bother to put dark beers on sale, as the perception is that they don't sell when it is warm.

Beerattitude: Black and Brown IPA's have become all the rage with American Craft Brewers. This is in fact a direct response to what some, not I, would perceive as bland, boring roasted malt ales being brewed in the UK.

Hoppy, bitter, dark ales have been being brewed in the Pacific Northwest for decades. They've just caught on in the rest of the country in the last couple of years, maybe, but in any case they're not a response to anything from the UK, rather, just the typical heavy handed use of hops up there in hop country.

And why capitalise "craft [sic] brewers"? It's a meaningless term, much less one worth revering.

Your final point though, this I agree with 100%.

Since when did heavy hopping prevent a stout/porter from being decribed as such?

I thought the hallmark of the so called Black IPA was a dark colour coupled with as little roast character as possible. Hence the use of stuff like dehusked carafa in the malt bill.

Still, nice for us to bastardise an american style for once.

On a hot day a cool bottle of Guinness Foreign Extra Stout is sublime.

I was delighted to see that Monty's brewery have brewed a champagne style beer for Christmas called Ding Dong. It's not too strong and is lighter. Not everyone wants to change their style of beer just because the weather is a bit colder!

So it seems Black IPA as a style isn't nailed down and generally, variety is required. Thanks all.