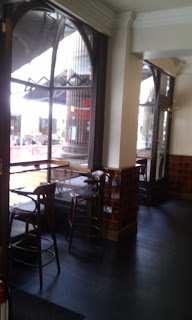 I was alerted to a new pub by the excellent CAMRA Magazine London Drinker and liked the sound of it. Easy to find too, unlike the foreign exchange bureau I spent half an hour traipsing round Liverpool St hunting for. After that I needed a pint so hopped the Central Line to Holborn, walked up an eerily deserted Southampton Row and left into Sicilian Avenue and a neat little arcade of quirky shops and restaurants. At the Bloomsbury end - see how easy I'm making it for you to find it - is the Holburn Whippet, a craft bar created from three units knocked into one. 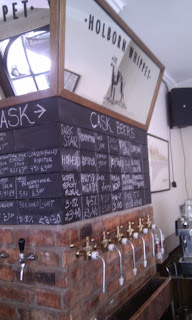 There are a few tables outside and inside large picture windows give excellent views of the arcade and if you fancy as I did, hopping on a bus, the 55 and 38 bus stop is right outside taking you straight to the west end - but that's very walkable too.  So it is handy.   Decor is wooden boards, brown tiles and cream walls with various whippet related pictures on the wall.  Beer is dispensed Euston Tap like to a series of taps in a central brick column, with the availability being displayed on neat blackboards on the serving column itself.  There are six cask beers mostly from London brewers and a smattering of Dark Star, though these change frequently.  In addition there is up to ten craft keg beers, a mixture of foreign and British, some served from keykegs. Lagers on my visit were from Bernard.  Prices are very keen for London and in a departure from the usual, there are no bottled beers, the thinking being that with around 16 taps including cider, there is enough beer choice to go at and the beers will be fresher. Quality was excellent, with the beers being cool and well conditioned. The cask beers are pumped from a cooled cellar to the column by an air compressor which is not in contact with the beer itself.   The pub prefers direct delivery from brewers where possible for freshness, so there will likely be an emphasis on London brewed beers. There is no tie on beer and anything can be obtained.

I sampled London Fields Hopster which was pale, hoppy and well bittered and a couple of halves of the keykeg Dark Star Redemption. One or two swirls knocked out a bit of the excess gas to reveal a truly lovely hoppy and balanced IPA. It was delicious, hence the second half, though perhaps at  5.7%, a bit too pokey for a session. Staff are happy to make recommendations for those a bit unsure and it was as a result of such a recommendation that I had the Redemption.

The Holborn Whippet is an excellent addition to the London drinking scene and though it is only a couple of months old, it is setting its own agenda by pushing draught beers only. The emphasis on fresh, cooled beer and quality is one I welcome. Food is of the gourmet burgers and fries type and sound fantastic.  The place is owned by one of the partners in the Euston Tap operation, so there is a great pedigree here and a fair bit of experience in the craft beer scene. The staff are cheerful and chatty and the manager, Neil a splendid chap who was happy to talk me through it all.

Will I be back? Certainly I will. It's my birthday next week and that's where we'll be going. Excellent beers, decent prices and posh burgers? What's not to like?

Oh you'll be wondering about the name as I was. It seems that in times gone by Holburn was, unlikely as it sounds, a hot bed of whippetry.  Possible I suppose.
Posted by Tandleman at 08:23

Seconded. I've been in a couple of times and it's all you say.

Cheers Sid. I liked it. Having cool, fresh well conditioned beer predisposed me to though.

Sparklers too I see. The only way to dispense a beer.

Been in 4-5 times since it opened. Great value food, nice staff, good location but overcarbonated cask ales,too many lagers on keg and an unfortunate partial tie to Adnams which uses up two pumps hold it back from being everything it should be. Also what is with the games room downstairs?. Still a decent pub just think it could be better

Partial tie to Adnams? I understood it's operated by one of the guys from Pivni, so there's an informal link to them. The downstairs is a work in progress - they had flooding problems in the late Spring, but obviously the WCs are down there and the kitchen is up and running. Not sure how it'll look once they resolve any problems.

yes its a joint venture with Adnams.hence you will find the excellent Ghost Ship on regularly but also some of their duff beers.cheers john

I also paid my first trip here recently and found the beers (especially Redemption Trinity) to be in top notch condition. I can also heartily recommend the Whippet Burger which is an absoulte snip at £7 when most pubs charge a tenner or more for the same sort of thing.

There is no tie to anyone at the Holborn Whippet

The Holborn Whippet needs good keg beer given the location. Adnams deliver with Bitburger and Konig and Black Isle. They also enable us to offer keg at £3.50/60 a pint in Holborn.

Cask - we feel 6 cask is enough to ensure the best freshness possible and plus we can rotate new beers quickly. Even the Euston Tap only had 8.

Thanks for eveyone's support.

Holborn Whippet is no a JV with anyone. It is owned by Bloomsbury Leisure. Small and free. Jason.

Whilst there are a few whippet associated pictures all the prints are high end prints by the wonderful Norman Cornish a Northumbrian and one of the pitman painters. Norman is now in his 90s and continues to paint and exhibit.