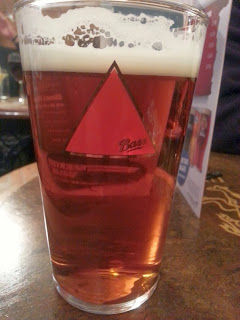 Someone was reminiscing about this recently and averring that you can still get a decent pint of it here and there.  Now putting aside "here and there" and even "now and then" which is implied, what is it like now in a pub that sells it a lot and has done for a long time? The opportunity to find out came up over the Christmas period when I had a drink with a few friends.  As it was on the way back to the bus stop, one suggested, "Why not pop in to the Unicorn and try a pint of Bass?" So we did.

The Unicorn is a splendidly old fashioned pub near the Arndale Centre and attracts a mixed clientèle.  It very much reminds me of how pubs used to be and particularly, though I don't suppose they'd thank me for the comparison, of pubs in Liverpool when I lived there.  Solid and attractive, it sits on a corner with an opened out interior that still contains some separate rooms and certainly separate drinking areas, served by a circular bar.  You can see where the passageway once was and the rooms off it are still there in the main.  There is young and old there, rich and poor, the chancer and the man in best attire with his daughter, surrounded by shopping. Her Christmas presents I'd guess. Some racing paper lads, some market traders, some like us because it is near the bus stop and some types whose eye you weren't keen to catch. A proper pub.

We brought our pints into the the back room and surveyed the beer.  Served in Bass glasses, the beer was a mid brown and served Northern style. It smelled sweet and malty with just a hint of hops.  And that's how it tasted too.  It was in great nick and I could have drank a few.  We all enjoyed it, but to me it wasn't the Bass of yesteryear, but that was hardly a surprise.

Is Bass part of the present or the past.  It is a ghost of its former self, so the past I'd say, but it was nice to drink it again nonetheless.

My recollection is that Draught Bass used to be a fair bit darker than it seems to be now.
Posted by Tandleman at 08:16

We drink it fairly regularly. There are two pubs in Penzance recommended for their excellent Bass in the 1978 Good Beer Guide, and both still sell it. At its best, it's really interesting -- that slight Orval-like funkiness -- and generally a drier, crisper pint than many other big brand bitters.

I drink in the Unicorn regularly (it's where manchester Jazz Society meets) and have always found the Bass to be in good condition. And you're right, it's one of the few proper working-class boozers left in the city centre.

The Unicorn is quite variable. Sometiems there isn't much on at all, even Bass. It really does depend on how nusy they've been. Of course it used to be home to the Honourable Order of Bass Drinkers where you paid a fixed fee (£10 last time I went 6652542) and you could sup into the wee small hours.

Ah, well, we've got a theory about that sweet spot between 'properly ripened' and 'off'. Only reason we can come up with for why cask ale *does* often seem to taste better than keg, all other things being equal. Adds complexity.

Nothing is like it used to be. Once all this internet milarky was just fields.

For whatever reason it does retain a strong following in the West Country. I think what Bailey is referring to is a slight sour note which is meant to be there and isn't a sign of being off.

I've always liked it and it's still something I'll usually go for in preference to most of the other widely-available "premium ales".

I've only had it on cask a few times in the last 5 years or so, and have enjoyed it well enough. Never thought much of the kegged stuff we got in Minnesota 20+ years ago, not to mention the bottled. I'll have a go at it again next time I see it.

The keg, canned and bottled versions are entirely different beers produced in a different brewery (IIRC the cask is brewed by Marston's, the others at the InBev plant at Samlesbury).

There have even been occasional spottings of a 3.6% ABV Extra Smooth version in the UK.

Mudgie: Bass has never had any lactic sourness by intention as far as I know. Going back to Burton Union days (1977 GBG) it was described as "Lightly hopped and delicate". Much later in 1988 it became fruity. Burton snatch which I remember isn't mentioned until it became brewed in conicals.

There is a good long description of it again in 1990 which mentions sweetness, fruit and sulphur.

I wrote on this subject nearly three years ago. It's an acceptable rather than wonderful beer nowadays; my local puts it on quite frequently. The revived Higsons I refer to in my post is still brewed by Liverpool Organic Brewery, but as their right to use the Higsons name has expired, they've renamed it Bier Head.

From Michael Jackson's Pocket Guide to Beer (1986 edition, signed by the author): "Its distinctive fruitiness is slightly sour and its body gentle for the gravity, yet these negative -sounding features make for a unique character, irresistible to its admirers." At its best, I always thought it was one of the great subtle beers.

Blimey. Even the great MJ gets it wrong!

Seriously though, I don't ever associate sour with Bass.

I remember Bass as smelling of odds, having a malty sourness and keeping you regular. I had a pint last year in a Derby GBG pub where Draught Bass served by jug from the cellar was the best seller. It was bland.

Bass was never sour. It was one of the best beers available in the UK during the 1970's. When at Birmingham University doing my M.Sc in Brewing Science and the a PH.D. I spent many evening in the Bass brewery Sample Rooms and got a great taste for Bass. Brewed of course in the Burton Unions then

I too have fond memories of Draught Bass back in the mid to late 1970's. I also drank more than a few pints of it in the Unicorn, whilst a student at Salford Uni.

My first job, after graduating, was working for Bass, in their wine & spirits division (Hedges & Butler), in London's East End. Myself and a colleague managed to wangle a trip to Burton, and had our own private tour round the Number 2 Brewery, where we saw the Burton Unions in action, and were then able to sample the finished product in the sample room. Pure nectar - I can still remember it now!

The best Bass I can remember in recent years (post Union Sets) was in The Strugglers in Lincoln, where the publican always ensured it had been 'blessed by the sabbath'. Sadly, today's Draught Bass is a shadow of its former self. The irony is that it is brewed by Marstons who still have Union Sets but only use them for Pedigree. What an opportunity missed!