Pub of the Year


Like most, if not all CAMRA Branches, we have a Pub of the Year (PoTY). Last time it was the Baum in Rochdale, which to its immense credit went on to win CAMRA's National Pub of the Year. A great accolade not just for them, but for our Branch too. Everyone got something out of that. It brought us great satisfaction,the town a lot of visitors and publicity and the Baum a lot of new business. 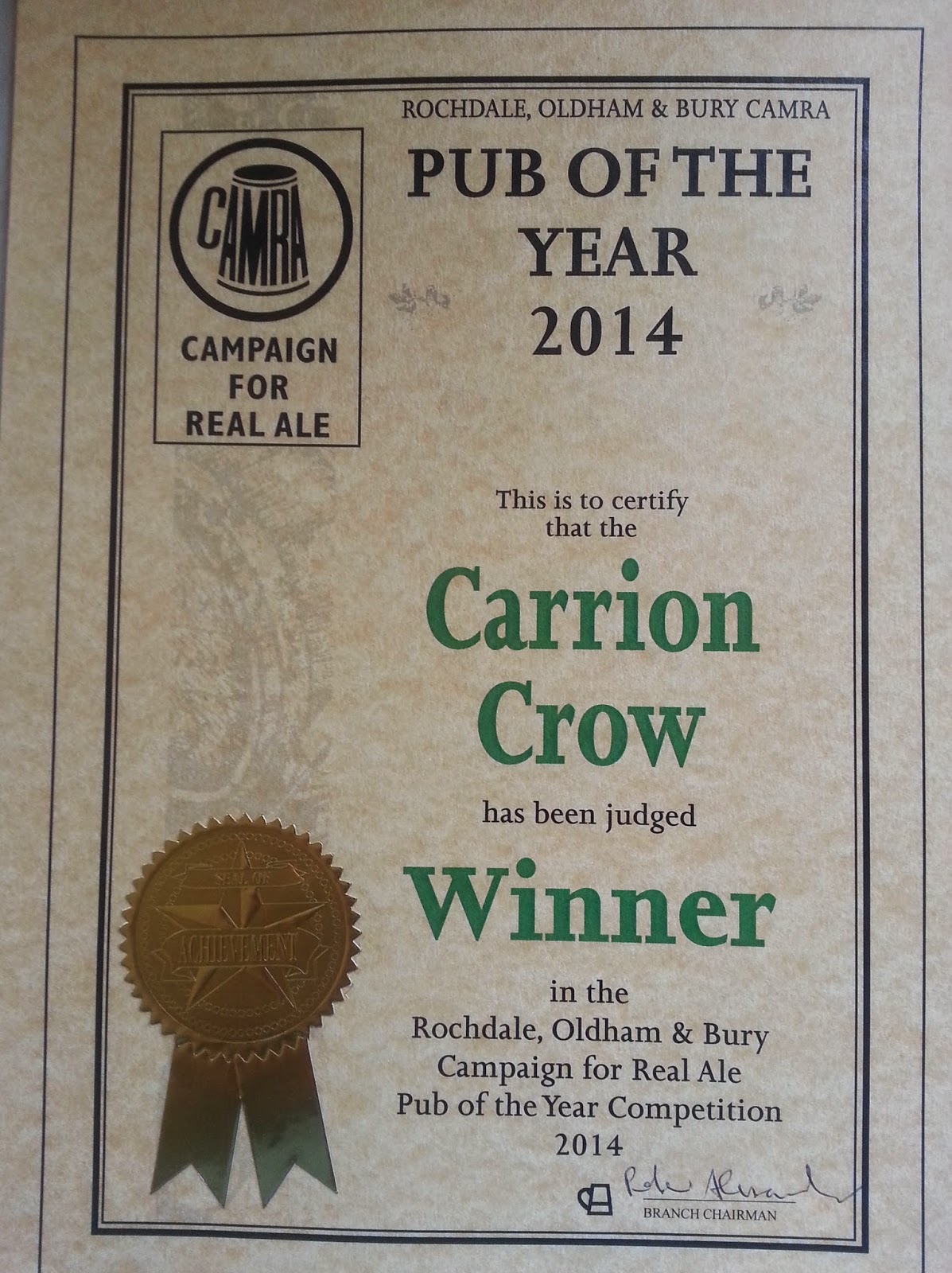 But things move on. This year we have a new Branch PoTY and despite it being selected by our members, I had never been there. A shocking admission for a Branch Chairman you may feel, but we have 582 pubs and oddly enough, I haven't been in them all, though maybe I should try to? It is a lot of pubs to look after and I sometimes envy smaller branches that get away with a couple of hundred. Or less. The Carrion Crow in Oldham is a locals pub. It is owned by Marstons and sells anything they can get their hands on from the entire Marstons range. This is a pretty good choice really, with beers from Banks, Jennings, Brakspear, Ringwood, Hobgoblin and of course Marstons themselves. With the amount of seasonal brews, as well as core ranges, this gives landlord Tony a lot to go at and when we called on Saturday, the display of pumpclips showed that he takes full advantage of the range. A couple of beer festivals a year adds to this as there is permission to buy guests from non Marstons breweries for these events.

With E in tow, we enjoyed the pub which is a simple open plan design with nooks and crannies to break it up. A cheerful bar with four handpulls will soon be augmented by two more.  Cask beer is selling. There was a hardcore sprinkling of locals in and we enjoyed their easy banter with each other and the way they slipped in and out, combining a drink with whatever other business they had outside. It reminded me a lot of my old local in Liverpool, which of course endeared it to me even more.   The landlord is very proud to have won the award as he has only been there three years and while he set out to build up the business, he feels he is ahead of his own schedule in doing so.  The brewery agrees and is so impressed it is doing a bit of a refit and makeover for him.

I'm looking forward to the presentation night on the 15th May, when the pub will be jumping and we'll get the local press along. Of course there are those that say CAMRA awards are meaningless. The Carrion Crow wouldn't agree.

I reckon some of the best beers in this group are coming out of Banks'. They seem to know what they are doing there.
Posted by Tandleman at 12:33

Labels: CAMRA, Pub of Year
Email ThisBlogThis!Share to TwitterShare to FacebookShare to Pinterest

CAMRA awards meaningless? If your branch is flogging them to the highest bidder, they are meaningless. If drinkers are getting around and vote for what they like then it is recognition from punters themselves. A peer reviewed boozer.

The only minor criticism would be the self selected nature of those selecting, nominating and voting. It's a specific subset of the drinking public. But even then, that subset are the only ones interested in doing it so whadya do?

If punters see the award as a recommendation then I'm sure pubs would covert one.

As a punter a CAMRA award is generally a recommendation. On a positive side they tend to be decent, safe, middle class piss haunts. I have never been knifed in one. A minor niggle is the amount of beige, beards & sandals they attract but at least they are less likely to knife you as those in hoodies and trackie bottoms.

Congrat to the pub!, I won't get round to a visit as I can rarely be bothered leaving my sofa, and the fridge is well stocked at the moment. But still, congrats and all that.

Do they serve through a sparkler?

Tim. Of course. I think the chances of a pub that does not sell beer through a sparkler winning a PoTY in this neck of the woods, is minimal to none.

Good to see a “community” pub getting a Pub of the Year award as opposed to a specialist beer outlet. Do we know what it was originally called, as “Carrion Crow” sounds like a modern renaming?

Mudgie. I can delight you even more. It has always been the Carrion Crow since it was built. Not sure when, but late 18th, early 19th Century.

As long as they don't pretend the rose is glued to the pump we are all happy.