I was brewing beer in London recently with Pilsner Urquell. Martyn Cornell has already set out the background and detail of why we were all gathered in the White Horse at Parson's Green here, so I urge you to read his blog first (good advice at any time - for example, his piece on supplying beer to the troops after D Day is superb).  He gives all the detail, so, keen on avoiding hard work as I am, I won't do it all again here.  Thanks Martyn.  I owe you a pint.

A quick recap though of the mission. In the upstairs room at the White Horse, six teams -  three a day over two days all to brew a lager beer based on the Pilsner Urquell recipe.  The aim is to tweak, or indeed utterly change the PU recipe and produce a beer to be judged later. The winning beer to be brewed commercially by Windsor and Eton Brewery.  So big stakes and a very serious brew-off punctuated by a lot of fun.  Throughout the day we had superb advice from Václav Berka PU Senior Brewmaster, Paddy Johnson of Windsor and Eton Brewery and from Greg Tucker, a taste psychologist, who was with us from the beginning and whose insight into tasting was for me one of the highlights of a day of highlights.  Think you know about taste? Think again.  He was brilliant both in content and delivery. 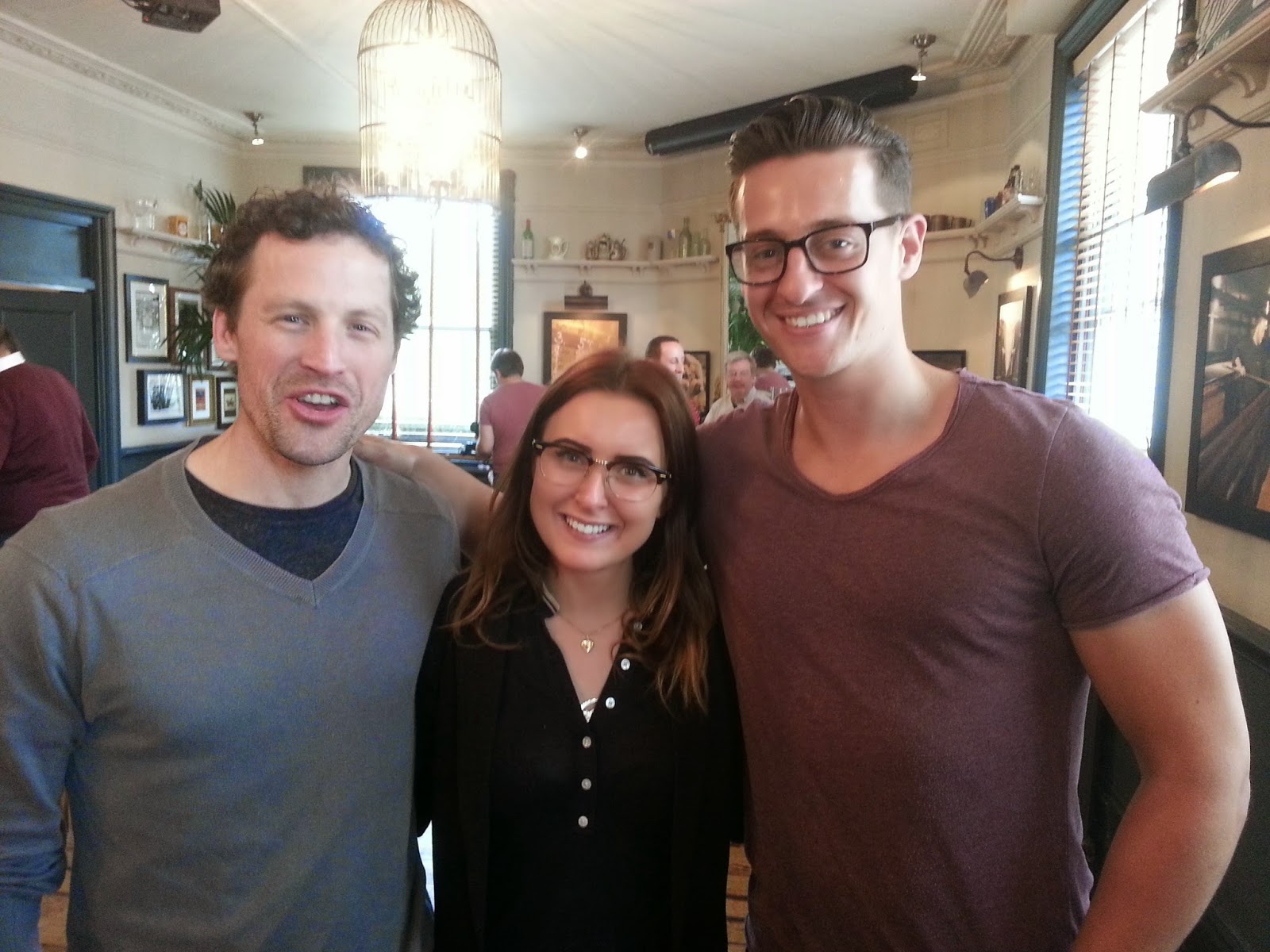 Now I'm no home brewer, but I like to think I know enough about the processes not to make a fool of myself, so our little team - thrust together absolutely randomly - first all determined that none of us were home brewers - or indeed any other kinds of brewers.  So we had an even non brewing playing field and hopefully not too many preconceptions. We had though all listened carefully to the pep talk by Václav and another by Paddy and fortunately all of us had taken the same main message out of it "Less is more."  We decided at that point that our recipe would be a tweak, not a complete re-write. 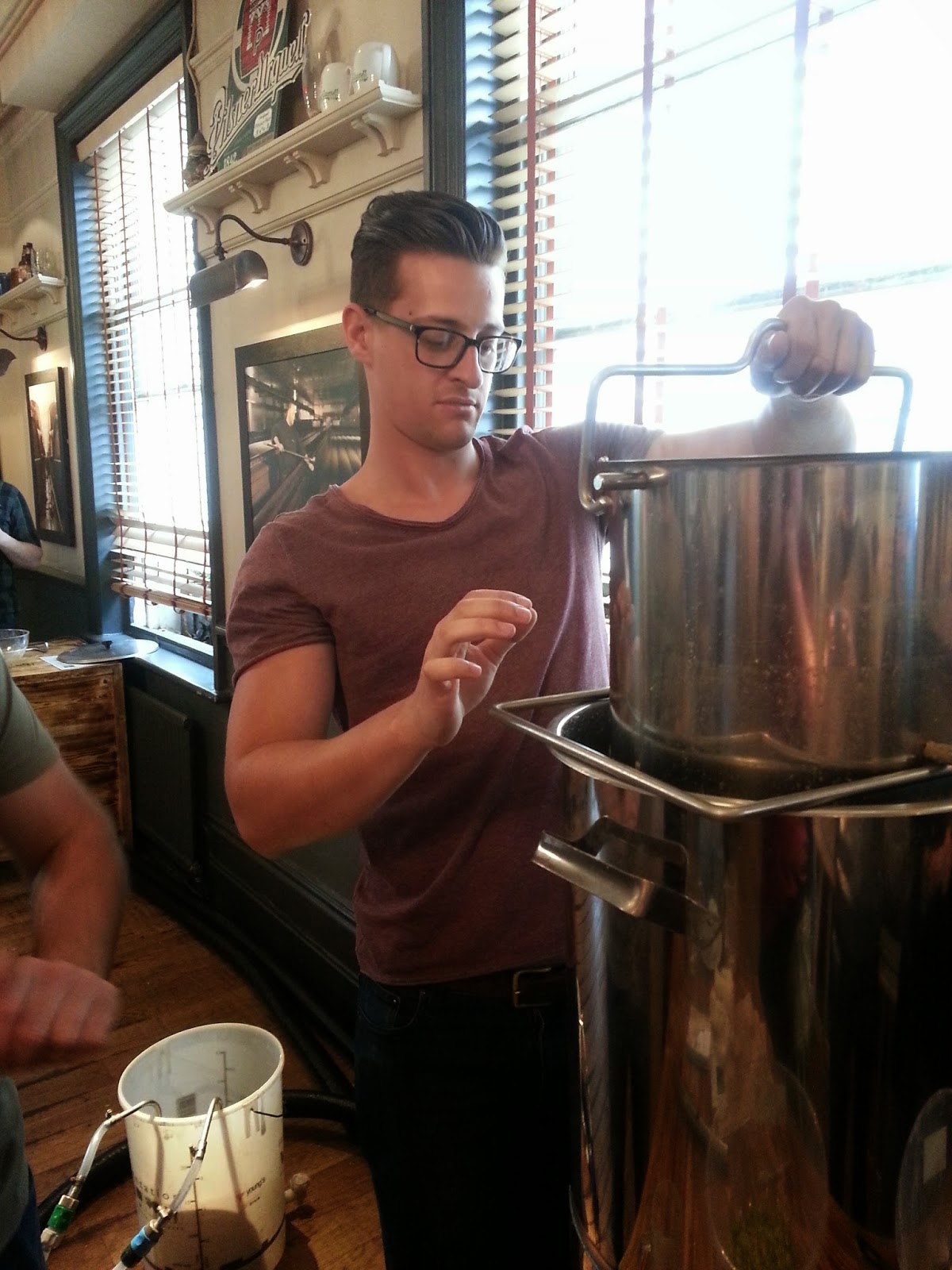 The water - brought from Pilsen was already being boiled - so we (Canadian Presenter and Filmmaker Nate Nolan, Norwegian writer Line Elise Svanevik from In a Pub Magazine (who incidentally sounded as Norwegian as I do), Neil Walker, Blogger and National Press Officer at CAMRA and me) started thinking about malt.  PU is brewed with 100% pilsner malt.  We decided that we wanted something with more mouthfeel, so we substituted some melanoidin malt and just a touch of Munich to again add richness and also to add a touch of colour which in PU is provided by triple decoction.  Not something we could do.  That decided, it was into the boil.  For those that like detail; 3.9kg Pilsner Malt, 325g Munich Malt and 75g Melanoidin Malt went in and a lot of hot and sticky stirring ensued. 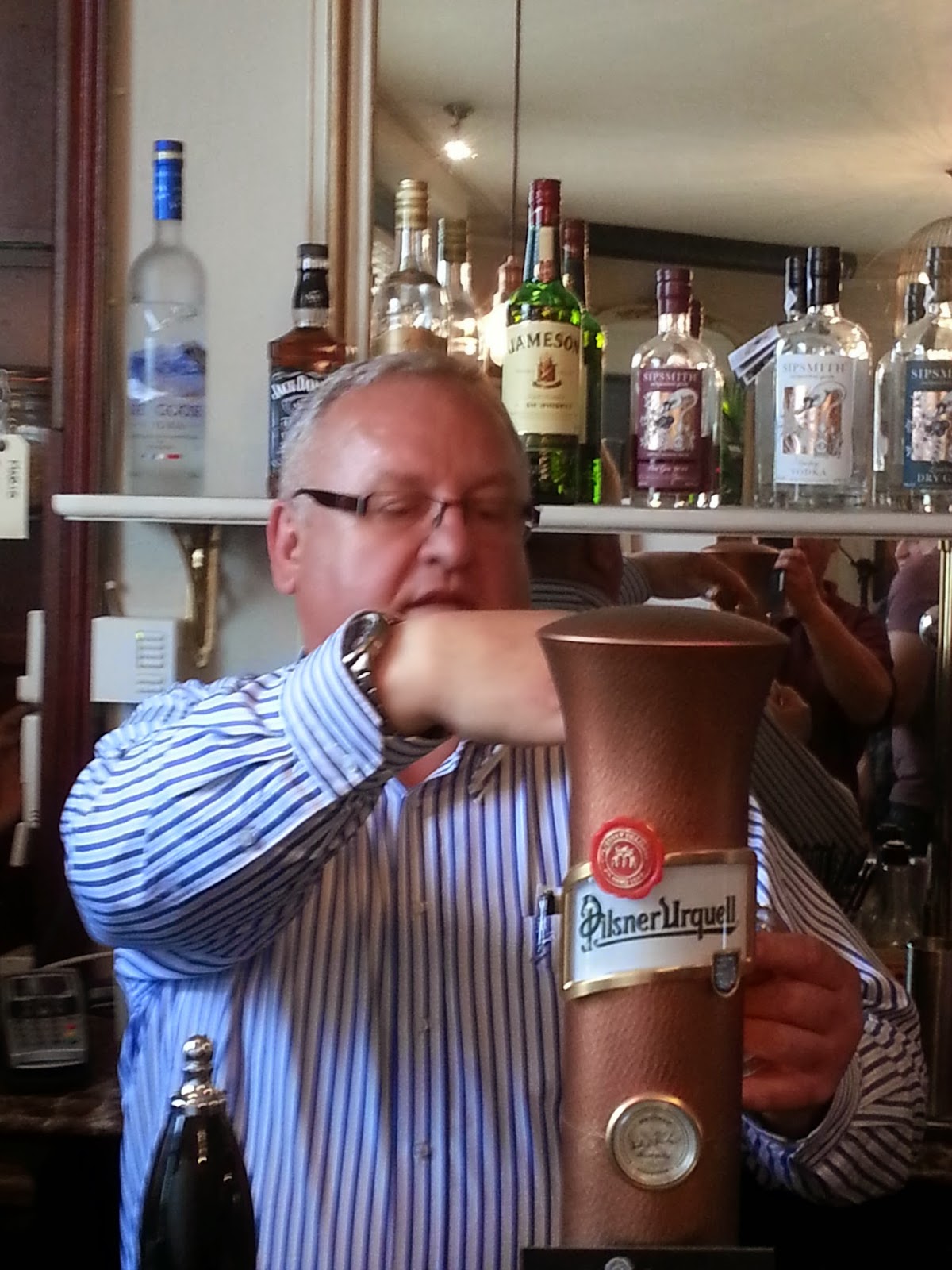 The hops discussion was much livelier and longer lasting.  PU is hopped solely with Saaz, but after much sensual rubbing, sniffing, oohing and aahing, we decided on an all Czech hop bill.  Currying favour? Us? Certainly.  So we had 40g Saaz in the initial boil, 20g of Agnus five minutes from the end and 40g of Kazbek (which we all really loved) to provide aroma at flame out.  Sounds good?   We thought so.  We ended up more or less where we wanted to be with an OG of 1048.6.  21 litres in all.  The wort tasted good. Much as we'd hoped, with good bitterness under all the sweetness and distinct lemon and spice.  The worts were then chilled and the yeast pitched before being taken away to London Beer Labs for fermentation and lagering.

Of course all breweries have to have a name and ours was Four Corners (as in the four different countries of the world our team hailed from) and the beer was named Velvet Pilsner after the Velvet Revolution that separated the Czech Republic from Slovakia. Everything had been thought of and we even had on hand a design artist who pulled together a remarkably good label from our very vague and unformed thoughts. Regrettably I didn't take a photo of that!

The resulting beers will be bottled for judging in July.  I can't wait.  I'll be there biting my nails, but we are all quietly confident.

We were also treated to copious amounts of Tankovna unpasteurised Pilsner Urquell, poured mainly by Václav himself.  It is a cracking, complex beer.  My thanks to Pilsner Urquell UK and to Mark Dredge for the invitation to a fascinating day.
Posted by Tandleman at 09:05

Minor historical correction, the Velvet Revolution was the overthrow of Communism in Czechoslovakia, lead by the great, and much missed, Vaclav Havel. The separation of the Czech and Slovak Republics was the Velvet Divorce.

Oh and as I am in pedant mode, 'tankovna' is the place that sells 'tankova' beer.

Well it led to the separation so in that sense I'm right.

Well we had it in a pub with the tanks, so in that sense I'm right.

where can we all buy tandy beer?

What happened to my invitation??

I think the new refrigerated transportation helps a lot! It will only get better when they shift to brown bottles instead of green.

Who would have thought that evil multinational anti-craft companies like SABMiller could produce such wonderful beer??

Brown vs. green...I can't ever recall having had skunky PU. Other draught beer drunk in the sunshine, yes, but lightstruck bottles? Not me.