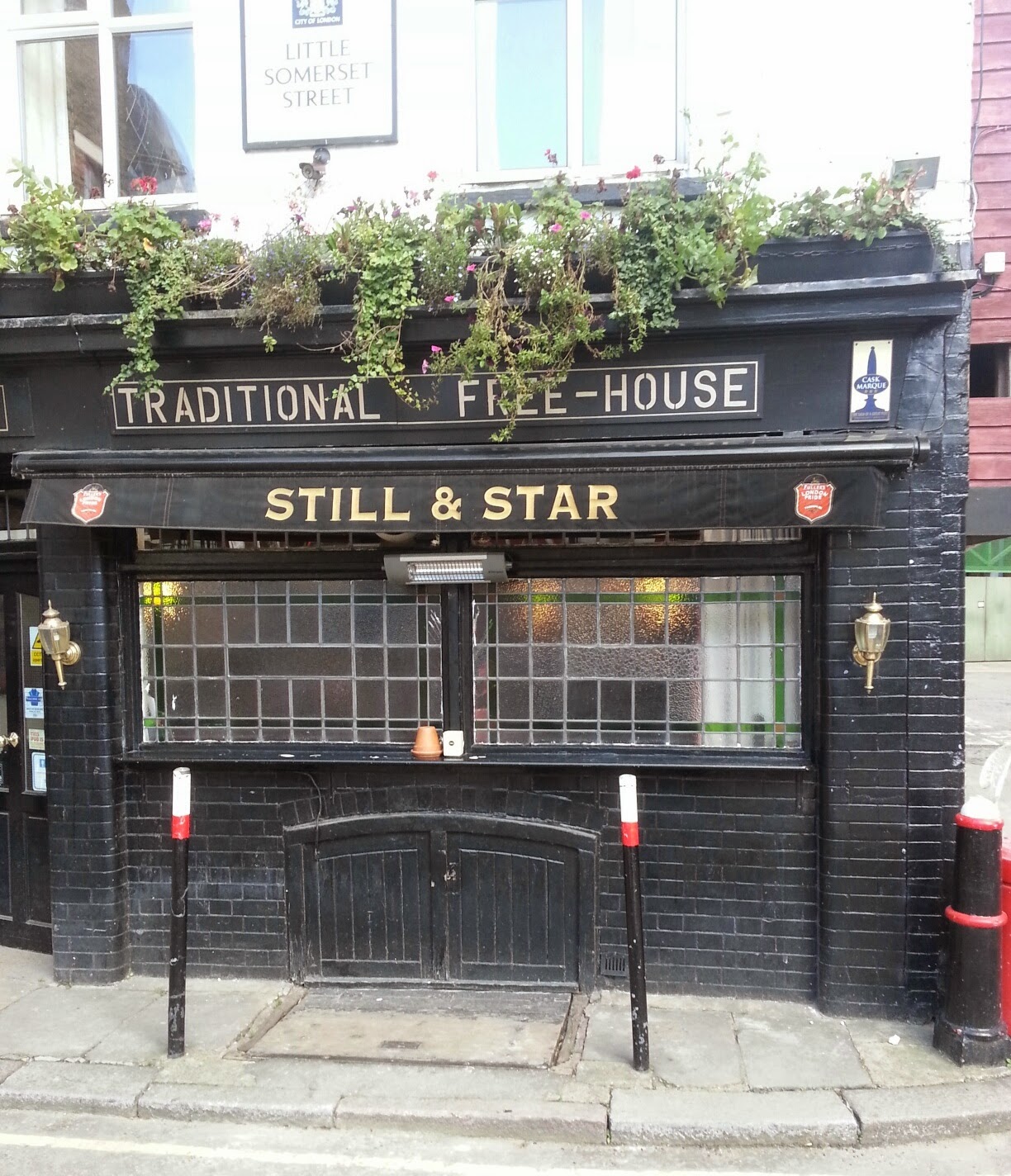 Apparently this pub, nearly opposite Aldgate Tube Station,  now houses one of London's newest breweries as was discussed, I think, on Twitter some weeks ago.  So far, there isn't that much more to go on -  unless you know differently of course - but I have heard nothing. When I was last in London, last week I noticed on my way back to Manchester, that it seemed to be in production. As it was before opening time though, I couldn't pop in to try it out.  This is a pub I have been in a couple of times before, but never found it to be either conducive or welcoming and usually with three or four mainstream brown beers of similar strength in only average condition.  It was therefore a shock to me to hear that a brewery has been added.  Even more shocking I suppose is that they aren't whacking out a Courage Bestalike -  if the photo which illustrates this blog post is anything to go by.

I'm down in London tomorrow again and will take this opportunity to give it a go, as invariably it is at Aldgate I alight when I visit.  It would be nice to have a decent brewpub near my London flat and this would be, by some way, the nearest. You will see they seem to have started off with a Citra based beer. Well we shall see how it turns out and what the brewery is called officially, though if the photo is to be believed, it seems it is just "The Still and Star Brewpub".  I suppose it does what it says on the tin.

I'll let you know how I get on.

I don't know why this is, but I'm not expecting great things here. I do hope I'm wrong.

Those are my exact thoughts when I heard they were going to brew.They will try to brew a brown bitter to rival what,s usually on.I am looking forward to trying their beer also tomorrow.

I dunno.
You could always do something original like trying a beer before writing a blog post saying you have misgivings about it.

PPT - See above by oldgeezer and my own experience. That's why.

My point is that the contrast between then and now (possibly) is stark.

Tandy I do like you old cock but you're talking bollocks.
You've written an entire post based on a brewpub you haven't been into since it became a brewpub and a beer you haven't tasted.
You cite oldgeezer who predicts the brewpub will brew a brown bitter to rival the other brown bitters on offer yet the first offering of this new brewpub is a citrus ale.
I'm all for clickbait lovey but play the game a little bit at least.

Sorry Prof you misunderheard me.Those were my thoughts when I heard a few weeks ago that they were going to brew.Citrus ale sounds fine but I have had plenty of supposed hoppy beers that turned out boring brown.Sadly none on last night.cheers

PPT. See next post you get an honourable mention!

Jeez,fame at last.
But I am keen to know whether it lived up to your preconceptions !

When I called in earlier this week there was no home brew on. (Why?)
Talking to the brewer, a drinks industry salesperson/marketing'er, who drinks lager, he said he is using a less than 1BBL kit that cost £25k and is run by some contraption called an iPad.
"I'm not expecting great things here. I do hope I'm wrong."
Still not tasted any brew; so we wait and see.
tankard

I just had quite a lengthy conversation and very interesting with the licensee, Michael, over the phone. The pub has a demonstration model of an automatic brewhouse with from what I can gather a maximum capacity of 18 gallons, so just over 80 litres or half a barrel. The machine does everything for you, with preprogrammed recipes (an American pale, an English pale, a blonde and a 'citrus ale' with Citra hops) with more prepogrammed recipes to be added later, and you can also vary thenm or use your own recipesif you want. I'm told beer quality is good, of course they would say that, but people are drinking it anyway as it's rapidly selling out. The idea is to sell the system to more pubs -- and if it works well, I suspect they might be onto something here. And it's going to make the job of people like me who try to keep up with all new breweries even more difficult than it is at the moment!

Interesting stuff Des. Next time I'm down I'll report on it.