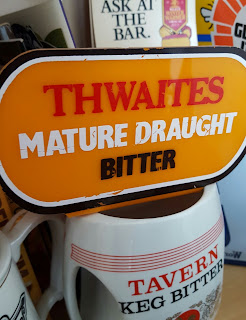 No, not me. I'm falling to bits. Beer I mean. Well cask conditioned beer that is.  Does anyone remember that cask conditioned beer used to be called, among other things, cask matured beer?  Well it did and there was a reason for that. It tasted better if you left it for a bit before venting and serving it.

The landlord of our pub had a cask of JW Lees latest seasonal beer, Kaleidoscope, which he's kept in the cellar for an extra week.  It was rather good.  Too often beer is just dropped bright then served. If it has not undergone any maturation time in the brewery cellar - and that's unlikely these days in a lot of cases -  then it is likely to be thinner and less tasty that it might have been had it been given some time. I remember giving the Landlady such advice years ago when she was the Boss in our little boozer.

So landlords, there are many tips I can give about keeping cask ale, but this one is easy, technically at least. If you can get get a week ahead in the cellar - and I know it costs - it is very likely that as long as you keep your cellar at the correct temperature, then you will serve much better cask beer.

Keeping cask beer is easy as long as you follow the basics. No real excuses for not doing so.

A local brewer of some repute sent me a direct twitter message last week to advise me that he had complaints from a pub about his beer. When he went to the pub, the cellar was at 20C.  See what I mean?
Posted by Tandleman at 15:05

What on Earth was he doing? Did he have a hot tub in the cellar as well?

In my view, the lack of care over temperatures derives, at least in part, from the misconception which originally came from Americans, and was perpetuated by John Major, that we like warm beer.

Trouble is, there's a lot of mixed messaging out there now with the new wave of brewers urging us to drink their (usually brewery-conditioned and hop-forward) beers as 'fresh' as possible.

I totally agree with everything you say here about cask-conditioning, Tandleman. The clue of course is in the name, but these days most of the conditioning seems to take place at the brewery.

Many so-called cask-conditioned ales, have very low yeast counts and will drop bright within a matter of hours. Too many licensees are under the impression that they are then OK to serve, but as you rightly point out, the beer will be lacking in condition and will taste thin and immature.

I know it’s all about the money, but if the pub can keep a week ahead, the beer will be that much better, it is likely to sell faster and everyone benefits.

I am in the process of writing an article or two of my own on the subject of cask-conditioning, so keep an eye out on my blog.

ps. Good to meet up with you last week, at the Beer Writers’ Bash.

What would be the typical life cycle of a barrel of ber then?How many days to drop bright? How long till peak condition? When does it go past its best?

I know the strength makes a difference too, but I was just wondering how it works in general.

probably the heat exchange kit that generates the ultra cold temps for the beer lines for the lagers,and they just forget the heat has to go somewhere,although Ive been in places that just assume a celler will be naturally cold enough because its below streetlevel, maybe in some parts of the country it is,but not everywhere for sure, just think why the London Underground tube lines get so warm in the summer.

theres certainly benefit from not pushing cask beer on too soon,and an extra week I think is perfectly possible to aim for. but there is sometimes perhaps a tendency to go too long as well, it all comes down to keeping on top of things and either regularly sampling or responding to feedback.

I had a brew day at the Windsor Castle (Sadlers brewery) in Lye and whilst there I had a Stumbling Badger and stayed propping up the bar waiting for the next aspect of the brewing process. A chap came in and asked for a Stumbling Badger and it had gone off. My half was absolutely fine, clear, with condition but the next time the pump was addressed, it was murky and undrinkable. Very curious. Anyway, the barman went to put a new barrel on and I commented that what I ought to do was see if I could tell the difference between the old end-of-barrel and the fresh one (it being a ‘living maturing drink that changes from one day to the next’ according to the CAMRA bumpf). No sooner said than done, so I sat at the bar with two ostensibly identical beers in front of me sipping from each. There was a subtle difference in flavour but that may have been due to the fact that the fresher one was cooler, apart from that, they seemed the same to me, although my judgement may have been a little jaded by then. Of course I don't know what the turn-over was but I wouldn't have thought it would be too fast, as this was on a Wednesday. so not necessarily proven (from a sample size of one, admittedly) that there's a significant difference on sustained storage.