Pub Curmudgeon is often banging on about pubs behaving like restaurants and instead of treating food as a supplement to drinking, they reserve all the tables to the detriment of customers who just fancy a pint or two. Mainly his complaints centre around questions such as "Are you dining with us today?" It's a fair point and it can be dispiriting if all the tables are set out for diners, with cutlery, menus and whatnot and have reserved signs on them, especially if the tables aren't occupied. Rightly, the German system of saying when a table is available until is recommended, but rarely seen in the UK. 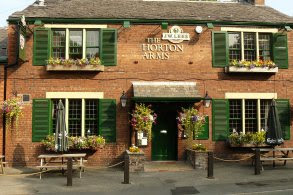 A pub I used to frequent rather a lot is Lees Horton Arms, set under the motorway bridge in Chadderton and in quite a rural looking setting. It was always a really good, slightly upmarket, wet led pub and, when I first knew it, a Lees managed house with a legendary landlord, ex policeman Peter O'Neill though for many years after his time, a tenancy. I got to know a lot of the locals there and for quite a while, a gaggle of them used to come up to the Tavern for a drink on a Sunday, cementing relationships even more.  Two or three years ago, the pub was renovated, with a much loved side room becoming a dining area and a lovely new set of toilets built, replacing the somewhat tired ones.  The pub was given a modern look from its previous horsebrass forward incarnation, developed over years no doubt. New chairs and tables and various modern pictures and bric-a-brac together with a renovated kitchens, with proper home cooked food as opposed to Lees standard managed house menu, complete the picture. It's done rather well, if impersonally though a row of poseur tables in front of the bar creates a somewhat crowded look in front of the bar and jars somewhat.  Mudgie will be gratified to know bench seating mixes with other types and it seems to work well.

Knowing the place gets very busy and fancying having my tea out, last night I booked a table for me and E.  At six o'clock the pub was mobbed, with some of my old acquaintances still there, though relegated to a small corner of the bar, not spread out as they used to be. By far most of the customers were dining. This isn't the first time we have eaten here and the place was pretty full and everyone seemed to be having a great time. What of the beer? Fantastic quality Lees including on cask, that rarest of beasts cask Lees Mild in the shape of Brewer's Dark.  The Horton was always a bastion of cask mild and thankfully still is.  Four Lees beers in total, as well as Bohemia Regent. This was always a pub with plenty of locals and even though they have a little less space nowadays, they are still there and I dare say as it gets quieter later, many will still be coming in just for a drink. The food too, in generous portions, was delicious and the landlady, who I know from both here and the Tavern came over for a friendly natter, as did a few of my old drinking pals. I enjoyed myself immensely, for a great atmosphere, tip top beer and smashing food.

This seemed to me the best of both worlds in many ways and no doubt makes a lot more money than it did before and yes, I miss the place how it was, but this was really rather good and you can still buy a pint at the bar without the dreaded question.

There's a world of difference between making *some* provision for drinkers, and making none. IME Lees generally recognise this even in upmarket conversions.

I remember many years ago going for a lunchtime drink in this pub when I was working in Royton. In those days it seemed a cosy little tucked-away place.

You are right of course and Less do try I think. They never forget they are a brewer in my experience.

Enlightening and enjoyable read. It's nice to hear of a smooth transition.

Lees' Greyhound at Ashley near Altrincham is a good example of a pub where they have built a large extension for dining, but which remains fairly pubby in the older part near the bar.

The pubs in Cartmel in the South Lakes all operate the 'reserved from' system. The village can be very busy, especially in race weeks.