What's In a Name?


When it comes to modern day mild, plenty it seems.  Many brewers of mild have changed the name of the product to something considered more appealing. One of the first I recall was Brains, whose famous mild was renamed "Dark".  Others have done so including my own local brewery, JW Lees whose award winning mild (GB Mild was Champion Mild of Britain) to Brewer's Dark in an attempt to widen its appeal, alas without much success if local volumes are anything to go by. Resisting this trend though is Joseph Holt whose name resolutely and defiantly remains as "Mild". But the point remains the same, that mild is in deep decline and even Holt's have succumbed to the trend. Where it would once have been unthinkable to go into a Joey's house and find no mild, now it is more or less the norm, though as in the case of JW Lees, stubborn, loyal  pockets of mild drinking remain.

Another factor which needs to be taken into account is that mild, whatever it is called, is sometimes only able to be presented in cask form because of the relative success of smooth dark beer, the volumes of which allow cask beer to be sold where it is still required and without which, there would perhaps be none at all. Smooth and cask beer in these circumstances have a somewhat symbiotic relationship, which is all to the good for us as likes a pint of mild now and then. 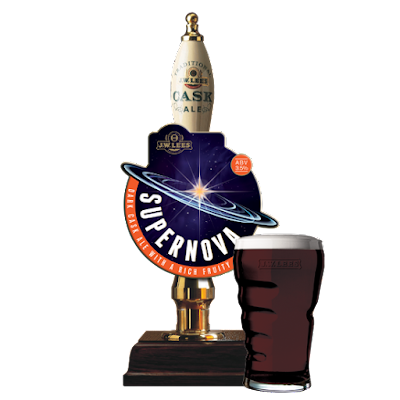 Now, oddly enough, this isn't a post singing the praises of mild, though readers of this blog will know I mention it now and then such as in this post. When the Landlady ran the Tavern, my local, she sold Lees Brewer's Dark as a standard beer, though sales weren't high, but our current landlord John sticks to smooth mild beer, while pushing the range of seasonals that Lees brew and, on occasion, the lesser known of Lees standard beers. This was the case last Sunday when on the bar appeared Lees's other mild, Supernova. Now this is a tweaked version of Brewer's Dark, but much fruitier and with a more complex taste profile. On the few times I see it, I buy it. It is lush.  John, our beloved landlord was pushing it for all its worth and it was interesting, in a packed pub, to see so many drinking it, both young and old, women and men.  Whenever I looked up from our table the pump was being cranked and it was good to see so many drinking it. I somehow doubt that if it had been "Brewer's Dark" it would have sold nearly as well. The name helped. A lot.

I believe many regular producers of mild (not all, before someone corrects me) have given up on the name "mild", but this shows that when you have a good beer, the name is attractive and you push it, mild can still sell. OK. It will never achieve the heights it once did, but a swoopable, dark, creamy, cask conditioned beer like this is low calorie, weak in alcohol and can add variety, a great drinking experience and attract itself to new customers.

Mild can sell, so don't overlook it. Two things though. An attractive name helps, but essential is that tight, creamy head.  Watery, flat beer is a general abomination, but much more so when it is dark. Sparkle dark beers, push them a bit and watch them fly out.

Brewers Dark  is a fine beer, but publicans reading this, try Supernova and sparkle it.  And readers please remember. Mild beer is for joyous gulping, not sipping.
Posted by Tandleman at 12:34

Mild month ain't till May, beardies. You're not obligated to neck this pish until then.

Tempted to hop on a plane TODAY. Even on that gamble-with-your-life cheapo Irish airline what flies direct to MAN, which I'd normally boycott, being pro-union and all that.

Is this a regular from Lees?

Next time we're in London, we really need to bring a sparkler along to the Royal Oak and have them do us up pints of that 3% Harvey's Mild both ways, in the sake of science.

Brains did not,so far as I am aware,call Dark Mild,its former name was Red Dragon or RD

John: You may well be right, but the principle remains the same.

I liked Sarah Hughes Mild but I think the style goes downhill after that.

I remember being told in the 70s that a cask of dark mild in the cellar was ideal for emptying the slops bucket into, as the colour concealed what was going on and mild drinkers couldn't tell the difference anyway (this was when I lived in Leeds for a year or two).

A few years back, a Virginia brewer was experiencing slow sales of his draft and cask Dark Mild Ale, called such. He re-christened it as Atomic Monkey, and sales boomed.

Advice that's too late for Jennings Mild that bit the dust a couple of weeks ago.

Ian, you are quite right:

Mild's poor reputation was originally partly due to the practice of pouring all the beer slops into it. One irate CAMRA member took me to task for spreading scurrilous urban myths, but he was wrong; this practice did go on. I know because I had several relatives who worked in the pub business from the 1940s to the 1980s, and also some longer serving licensees have told me. I wrote about this on my own blog, where I covered the possibility of infection and the effects of returning flat beer into the cask. What I didn't cover was that, by putting different beers into the cask, you'd be changing the nature and flavour of the beer in an unpredictable, and not often beneficial, way. No wonder keg caught on: at least you knew what you were getting.

Slops eh? Nice. It's almost as if the solution to beer quality was sealed containers that can't be tampered with.

It is an old wives' tale. Slops went back to the bitter. It sold for a higher price.