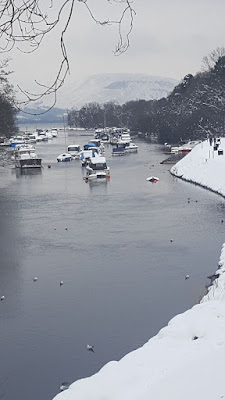 It must be hard being a real ale campaigner in Scotland and I take my hat off to those that do it. This is a rocky and uphill road and it has much ability to give disappointment and duff pints in equal measure. Though there must be compensating pleasures, I'm glad I do my bit for CAMRA in the relatively green, sunny and real ale rich pastures of Rochdale, Oldham and Bury.

But the campaign is about quality as well as choice, so how does Balloch measure up?  Firstly, why Balloch? Well simple really. It was the only handy place I could get a train to. Balloch is at the bottom of Loch Lomond, though in shivering cold, its banks and braes were anything but bonny. The road wasn't that bonny either, being around two feet of slushy snow. It has three real ale outlets - I say outlets rather than pubs - as none is a pub in the accepted English sense, two being hotel bars and one, just a typical Scottish one room bar*.  It has one other advantage as a small real ale crawl - all the boozers are within a three minute walk of the station and consequently of each other.

*The Dog House is a typical one roomed bar - or so I thought - but seemingly there is another bar within. Nonetheless I was in the one with the real ale, though as might be expected, everyone was drinking Tennents or cider, which may well explain the slightly stale and oxidised pint of the local brew, Southern Summit from Loch Lomond Brewery, carefully served in a Belhaven Best glass. The room was roughly rectangular with some bench seating and a small row of tables and chairs placed strategically in front of one of the dominating TVs.  It was friendly enough in that nobody stabbed me, but it was clearly a locals bar, with banter flying freely about as the denizens battered back the TL and walloped down the vodka.  I stayed for one only and was gratified that another recalcitrant ordered the cask before I left. Maybe it would be better than mine?

Just 50 yards away on the other side of the road was a place, Balloch House, I'd been to before without having a particularly good time.  I wrote about that here.  Hoping for improvement, I went in. Firstly it was busy.  Two guys were playing traditional (not Scottish) music and a few stood at the bar though like me they held their coats awkwardly under their arms, as there was nowhere apparent to hang them. The handpump selection was, one (empty), one (Doom Bar - off,) one (Bitter and Twisted) and the other Deuchars IPA. There might even have been another, but I can't remember. I selected Bitter and Twisted which was unsparkled and definitely uninspiring - average at best.  Looking around the pub had been furnished with various useless tat by modern pub central and although plenty people were in, it strikes me as the kind of place that couldn't generate atmosphere if you sealed all the doors and windows and pumped laughing gas in. (Your mileage may vary.) I was additionally annoyed by the free Wi-Fi which required - and didn't get - a huge amount of intrusive information as a matter of course. Having failed to enjoy this place on two visits, I must bravely face the fact that I like nothing at all about this Mitchells and Butler's outpost. Sorry. 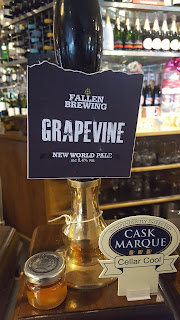 Lastly the Tullie Inn. This is a bit of a barn and was clearly redeveloped some years ago from its former more traditional look to aim for the summer trade. In winter, it just looked, big, soulless, cold and empty.  I was greeted at the door by an A board where "George and Mildred" - or whoever - assured me of a warm welcome. I find though that if you have to write the welcome down, it is sure to be wholly absent within. And so it came to pass.  Funnily though my Cask Marque accredited pint from Fallen Brewery of Stirling was pretty good, even though the beer, Grapevine, fell several hurdles short of its description of "New World Pale" and was a mighty £4 a pint. Time was against me and that one would have to do. My train and, unknown to me, a very disturbed night ahead, awaited me.

Balloch is probably best experienced for its views of Loch Lomond and the Ben. Stick to them and you'll be quite happy. Expect a lot from the local pubs and sadly, you may well be disappointed.

I don't recall any keg craft as such in any of the pubs, so that avenue was pretty well closed.

The rail line to Helensburgh is now restored and with luck I can nip down there later for a decent pint. I might even get home tomorrow.
Posted by Tandleman at 16:20

But I regularly hear from people that live in big cities in England that the battle for real ale has been won so how can this be?

Because those that think so live in.big cities in England?


I've only ever been to Scotland once.It was in the 90's but every pub I went into was like stepping back into the 70s.They could have been a metaphor for the country.Hard-edged,unwelcoming,taciturn,places to get drunk and not much else.
I'm sure beneath the impenetrable accent and flinty exterior of most Scottish people I meet there beats a heart of gold but why would you bother your arse trying to find it.
They revel in their unfriendliness and their visceral loathing of the English.
If only they'd had the guts to vote for independence we'd be free of them by now.

" My train and, unknown to me, a very disturbed night ahead, awaited me. "
Now that's a page-turner.I can't wait for how this one turns out.

Ian B
As a frequent visitor to the Ayrshire coast (from Oldham) I read your Scotland blogs with great interest. Within the sea of Tennents there is a CAMRA presence in Strathclyde and their mag recommends have been enjoyed. Namely the Wellington pub in Ayr (3 hand pumps), The Ayrshire & Galloway Hotel (even Dark Star there) and Geordies Byre (Jarl on tap). Further afield The Grapes in Stranraer is unpretentious, very friendly and with real ales to savour. When in Glasgow we always call at our favourite The Pot Still but looking forward to trying some of the others you've mentioned.

Balloch House, I think? A place which deserves better. Quite nice in the garden. On my one visit I had an underwhelming glass of Proper Job. (I also had a very minor bike pile up outside, caused by a considerate 4x4 driver who was leaving the car park waving us across. No beer was even involved.)

There is also a Marston's place, "Queen Of The Loch" at the roundabout at the entrance to Lomond Shores. New build? Iirc a sign outside promised craft beers (maybe also real ales). I did not go in as I was so miserably soaked to the literal skin that I did not even want a beer.

Syd Differential: do you ever think it might be you, not them?

MP: Balloch House indeed. Tha Balloch Hotel is long since gone. Given the weather I ventured no further.

Why would anyone be a real ale campaigner in Scotland or anywhere else? What would be the point? What would one hope to achieve? I mean either drink it or don't drink it. Ain't a campaign, pal.

It's possible,I suppose.
But have you ever met Alex Salmond ? If sneering at the English was an Olympic sport he'd be a shoo-in for the gold medal.
I imagine Mhairi Black,the youngest MP elected to the Commons for 300 years, would give him a run for his money but to be honest I can't understand a word she says.

I've started to really rate Fallen beers, when I've had them from decent establishments they always seem to have something more about them than other beers. They must have quite a good brewing process or something - I'd like to do some more research but I just don't get to Scotland as much as I'd like.

The suspense is killing me ...

Sadly Sid, it was to do with my ailing mother, nowt else.

Oh,sorry to hear that.
I thought you'd been involved in some nightmare journey involving bad weather.

When real ale is good in Scotland, it's as good as anywhere. Same with pubs. Beer in Geordies' Byre (Ayr).Bon Accord (Glasgow), Staggs (Mussleburgh), and a fair few Edinburgh pubs you'll know. Spoons can be better than English ones too.

Thank goodness for the Good Beer Guide, even if the entries in some cities seem to include EVERY cask outlet.

And indeed, I’m just always astounded concerning the remarkable things served by you. Some four facts on this page are undeniably the most effective I’ve had.
industrial safety course in chennai

I am reading your post from the beginning, it was so interesting to read & I feel thanks to you for posting such a good blog, keep updates regularly.
safety course in chennai

Excellent Wok, Thanks for sharing with us this valuable blog. I get solution of my problem. Visit for
Freight Forwarders in India

Ouch. I feel bad for the Balloch house.