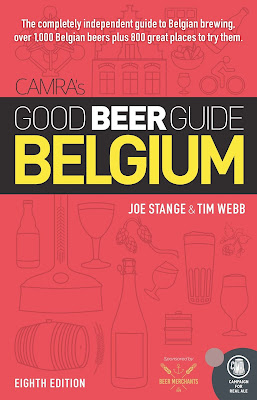 What is there to tell you about beer drinking in Belgium that you don't already know or can readily find out?   I'm guessing that was on the minds of the authors of this book when they say in the chapter entitled Beer in the Belgian Way(s) and aimed squarely at the armchair drinker or beer rating site aficionado, "Unlearn what you have learned, as it is unlikely to be correct." Now such advice when given by many could be safely disregarded as bravado at best, or chutzpah at worst, but when it comes from authors of the standing of Tim Webb and Joe Stange, you have to sit up and take notice, for these guys know their stuff.  Tim first produced a Good Beer Guide Belgium in 1992 and Joe is well known for his beer blog and is the author of "Around Brussels in 80 Beers", so they have a track record that gives you confidence from the get go.

The book itself, beautifully illustrated in colour throughout,  is fairly conventionally arranged and no worse for that. With a a foreword by the authors, a personal message  from Tim, whose last edition this is, a historical chapter about how Belgian beer has developed and expanded, one on food, travel and transport, beer styles (of course) and much more; everything is covered. Stylistically the book is written in a very easy going and approachable way.  It avoids being over technical and instead gently suggests to the reader how a beer might present. It outlines but does not define. There are handy little hints dotted about so you know how to order beer, whether you tip or not, where one might stay and some helpful notes about beer making and so on.  They even warn you about the comparative lack of cash points in Belgium. Who knew? All essential and appropriate but the meat of this book is, undoubtedly, the brewery listings and where you can best go to drink the beers. This is where the dedicated beer fiend and the beer curious alike will be most at home. The brewery section is arranged alphabetically and it is here you can gain an insight into what you might want to sample and what indeed you might want to avoid.  Each brewery has a bit of a pen picture, a listing of the beers with tasting notes and a helpful star rating system. One star earns you "Life is too short" and five stars are deemed "Amongst the best in the world".  Points in between are easily understood, so the reader will be gently guided in the right direction. This though is a book with opinions and the authors aren't afraid to air them. The description for Stella Artois (a two star beer) tells us the beer is "Impressively clean and beautifully presented" and then adds waspishly "wet air". Westmalle Tripel on the other hand gets five stars and is described as "the stuff of eulogies".

The part of the book listing pubs and bars is perhaps the section that the dedicated travelling beer drinker will find most useful. Alphabetically arranged by towns within regions, once you have decided where to go, the book becomes an essential vademecum when perusing pub or bar beer lists which can, in some cases, stretch to 300 or so beers.  The authors point out - and this is important - that they did not seek samples from breweries, but rather, went there and bought the beers. They are also keen to opine that, in an age of obfuscation and blurring of lines, often by large conglomerates,  the place of origin of beer remains important, as it adds to authenticity. This is particularly so in Belgium, where beer in all its diverse forms so often has a clear link to its local or regional roots.

The best thing that can usually be said about a guide book is that it makes you want to go there, to check it out and to see if it really is like that. This book ticks all these boxes in spades and it will add a bit of genuine insight to the keenest Belgian beer afficionado, the armchair ticker, or those that aspire to travel there and see for themselves. I thoroughly recommend it.

The Good Beer Guide Belgium is published by the Campaign for Real Ale Ltd. who provided me with this preview copy.

I can vouch for Westmalle Tripel; a lovely beer. Dubbel is not half bad either.
Thanks for the review. This would make a great gift for my brother who lives in The Netherlands.

I've had a lot of mileage out of the previous edition and think it's great, so it's good to hear about the new one! I think they hit a really good balance between being opinionated and being objective, and manage to be informative without being too dry.

Belgian cashpoints......
Until quite recently, even in a tourist-rich environment like Bruges, a high proportion of the (rather sparse) cashpoints only took Belgian bank cards...

Rod - Just to show I read it properly, that is mentioned in the book.

I wrote about this book, not having seen a copy, in our local paper a couple of months ago. I have to admit my write-up was based on the CAMRA publicity. It's here if you're interested.