When we assembled in Haarlem for our AGM - "we" being BSF the Foreign International Beer Bars at the Great British Beer Festival - we arranged to meet at Uiltje Bar, which was for us at least, very handy, being a couple of minutes away from our hotel.  This is a fairly narrow bar with not much room and we soon filled it.  Even more so when the Scots lads appeared. A few bewildered Dutch made up the numbers.  We all needed a drink to get over the price of the drink though. Think €3.50 upwards for 0.2l which to most of us was really just a damp glass. To save you the arithmetic it works out at around £8 a pint for the cheapest and the sky the limit for the rest.  Given that we obviously at the arse end of a Left Handed Giant tap takeover and there wasn't many Dutch beers on, it wasn't that conducive to merriment.

A few of us soon escaped to a more mainstream bar across the road where choice was oddly enough a little better, with some decent local lagers, abbey beers and De Konink at prices that didn't quite make the pips squeak.  Also an improvement was a chatty woman behind the bar who knew how many beans made five and happily talked us through what we could expect pubwise in Haarlem. All in all a much better deal.  After a while we made our way to Jopen, a brewery in a converted church with a fantastic looking in-house brewery, a brilliant atmosphere, decent beer and rather good grub. We realised though there, as subsequent pub visits confirmed, that drinking in the Netherlands is not a cheap experience, but given the right environment, it can be a very enjoyable one.

Our AGM was held in the main Jopen Brewery and Tasting Rooms (Proeflokaal) on the outskirts of town. This was impressive too and had the advantage of another brewery tap (Uiltje) being round the corner. To our (relative) deep joy, this offered 0.3 measures - all at €4 - so we left for our next two brewery tap visits in a jollier frame of mind.

The Dutch countryside, apart from being flat as you'd expect seemed to consist mainly  of motorways and modern industrial buildings.  It all looked as if it had been built yesterday. This was by design a mystery tour and somewhat unnecessarily so. Like being on a ballistic nuclear submarine on patrol, almost none of us had the faintest idea where we were going when we set off, had no idea where we were when we got there, or, when we got back, where we'd been. The brewery taps, as in most craft beer outlets, could have been anywhere, with a range of identikit beers and lookalike bars with keg walls, which could be anywhere in the world. Craft beer innovative? How so? 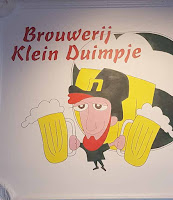 There was one bit of gentle relief. On the outskirts of Utrecht, on yet another industrial estate, the De Kromme brewery tap was small. 48 thirsty folks leaped out of the coach and crowded the bar.  A drink would be a while we surmised looking at the solid wall of backs. I'd spotted a restaurant next door though. We nipped in. They were prepping for dinner but had a bar. Could us five come in for a drink? "Of course" we were told. Just the job. Gulpener was gulped and repeated and we joined the noisy throng and a much reduced queue in time for a couple of black IPAs before leaving for our final stop at Klein Duimje (Tom Thumb) which was far more pubby than the others. Full of well pissed locals and an astonishing number of beers, it was my favourite by far. The beer was good, we didn't care about the price by then and it wasn't on an industrial estate. Nothing not to like.

Our return to Haarlem was not by motorway. Instead, to prove an older Holland exists, it was quaint villages and large posh houses. Still bloody flat though.

Back in Haarlem we just went to some local pubs for non craft beer. I was crafted out by then.

In case you are wondering how I recalled all this stuff? Photos on my phone and a bit of t'internet of course. None of this taking notes faff.
Posted by Tandleman at 16:31

Ah, that would explain why I saw some of the BSF crew in Amsterdam (in de Wildeman) on the Monday afternoon.

Whilst attending the final European Beer Writers’ Conference in Amsterdam, back in 2016, I was fortunate to visit both the Jopen Church Brewery and the main one on the outskirts of Haarlem.

Great places with some great beer as well, and fond memories too. As for prices, the beer(s) were part of the package so were all inclusive!

Excellent Thanks...., Gives me more Info, I'm Staying in Harlem "September" for amongst other things borefts ... ;)

Tanders - it's Kromme Haring actually - and I've still not bene there. It will be on my list for June when I'm in Amsterdam for six nights and have a couple of trips out planned.

There are some very good bars in Utrecht but as you say, not cheap.

I see that now. I thought Haring was just a place.

Ah. Haring is Dutch for Herring in fact.