There exists a hard core of early morning imbibers.  I suppose there always has been, but before the licensing laws were changed many years ago, by and large they had to do their supping at home under the baleful and disapproving eye of her indoors, as she bustled about getting the nippers their toast and sugar puffs. Hardly conducive to beery conviviality one might imagine.  Mind you, I have read reports of publicans being fined in the old days for admitting customers before the prescribed time and being spotted by an eagle eyed constable, though transgressions - at least most of those recorded - were mainly between lunchtime and evening sessions  - or after time had been called at night.  Far easier to keep customers in if you are doing "staybehinds" after sessions, than attract them when you are setting up for the day and having them under your feet. Breakfast time illicit on premises drinking, was even then I think, a little unusual and most likely discouraged.

But nowadays you don't have to worry about that sort of thing. Should you require liquid refreshment, it can be legally obtained at almost any time of the day and you can do it in licensed premises, away from disapproving eyes and subsequent frank exchanges of views.  We live in glorious and enlightened times.

This freedom to open and serve the amber nectar early has a main proponent. Enter J D Wetherspoon*. Many readers will know from personal experience, or anecdote, that Wetherspoons, especially those in small towns have developed a hard core of regular early morning topers.   These are usually a small dedicated band of the retired, the early risers, the ne'er do wells, the elderly, the unemployed and unemployable, the hardened (but not yet hopeless) drinkers and those just seeking the company of like minded fellows. 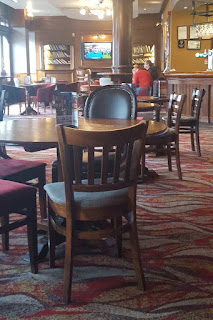 I watched some in their native environment the other day. My car was in for some work and I fancied a coffee. The shutters of JDW roll back at 8 am and a trickle of people slip in.  They cannot drink alcohol at 8, but there are preparations to be made. Most just grab a table, open their newspapers and settle down. The odd one buys a coffee, but this is an exception. Most if they drink anything, just have water which is freely available. Staff are used to this and make no move towards the bar, but get on with their own cups of tea and a bit of snap, or whatever prep they have to do.  Greetings, often just nods,  are exchanged, but mostly silence reigns.  Some set out their favourite tables with their preferred chairs. Furniture is shuffled round and carefully placed in pre-chosen spots. As more drift in, the proceedings, on this occasion, are interrupted by a practise fire evacuation. Thirteen of us - a motley crew - stand on the pavement for five minutes, then shuffle back in. Most return to stare into space from their perches, now fully kitted out and organised to satisfaction.

By 8.50 there is a palpable sense of expectation in the air.  Eyes flick towards the bar.  A few more arrive. Minutes tick away and suddenly there are people coming back to their tables with pints of beer and lager.  One dedicated soul has two, which he arranges carefully in front of him, rims almost touching. Overall pints are evenly split between lager and John Smith's Smooth.

By ten past nine, when I leave there is a noticeable air of contentment and the genesis of a conversational buzz.

If I have breakfast there, which I do from time to time, by half past ten the place will be going like a fair.  It is usually very jolly indeed.

Some spend quite a few hours there, but by four even the most hardcore will be gone, many resting for a repeat performance the next day.  This is an interesting sub culture of pub goers. Good luck to them I say.
Posted by Tandleman at 10:29

Reminds me of a light-hearted anecdote of days gone by I read in a CAMRA magazine once - how as a novice barman the writer had been startled by frantic pounding on the door at opening time (which I think was 11.30 a.m.) and been greeted by a wild-eyed figure in a state of some distress, demanding a pint... and another... and another. He rapidly learned to unlock at 11.30 sharp, and to have three pints lined up ready for Big Frank. He'd have got through nine or ten by the end of the lunchtime session, but the first three were crucial - he'd throw them straight down to make his hands stop shaking.

Pubs aren't social services, but you do wonder if a barman would do something about a customer like that these days, or at least ask around.

I agree that a Spoons at breakfast time can be a thoroughly convivial place - if you're ever in Exeter, don't miss the Imperial - although I do feel a bit odd about the 9.00 boozers. I've never seen anyone at the Big Frank level though*; I guess it's unusual to reach that stage of dependency without cutting out the middleman and going straight to vodka for breakfast.

*Although a journalist I met once, on a press trip to Bass's brewery, ran him close. We got there at 9.00, listened to people talk about computers for a while, then broke at 10.30 for coffee - except for my new friend, who decided to find out whether the free bar we'd been told about was open the whole day. So coffee and a ginger-nut for me, a pint of Bass for him - and another one at the end of the coffee-break, to take back in to the conference room. He got barred in the end - when he was going back for his second after-lunch pint, which I think was his ninth overall. Journalists, eh.

"These are usually a small dedicated band of the retired, the early risers, the ne'er do wells, the elderly, the unemployed and unemployable"
For years I've been telling myself that anyone drinking in a Spoons at 9am must have just come off a night shift...
AP

As an occasional early morning traveller to England, I've noticed that serving times vary from place, presumably based on local council rules. Some Wetherspoons will serve beer before 9; others it can be 10 before they start.

I think it was more a case of suppressed demand before the liberalisarion of opening hours - most of these folks wouldn't have been drinking cans, bottles or spirits at home.

However, don't forget that the old system of licensing hours allowed pubs to open as early as 10 am in some areas, whereas now it's relatively rare for non-Spoons pubs to open before noon.

There are a fair number of regular morning drinkers in Sam Smith's Boar' Head in Stockport when it opens at 11 am.

@Phil - wasn't that the tale of "Sticky" Edwards?

Sounds thoroughly civilised to me.

We get something vaguely similar in the US especially for Premier League matches and the 6 Nations for the rugby fans of the world (Scotland have claimed the Calcutta Cup every year since my boys were born!! Long may that continue). Brewery taprooms, the de facto wet-led pub of Virginian life, will open early for the games and with no daft rules about when they can sell alcohol, they sell alcohol.

Indeed. Good luck to them.

Some may prefer they sit in an armchair, lonely and bored, of course.

At least in Spoons (or Stonegate) they get comfort, company and a friendly face.

I rarely see many 9am drinkers drunk.

Mudge - that's the one! CAMRA magazine, online, same difference. No relation might I add.

"I rarely see many 9am drinkers drunk." I don't think you will Martin, these are hardened drinkers, topping up their alcohol levels from the day before.

I'm not being judgmental here, just reporting facts, but several years ago, I used to call in regularly for a coffee, on a Saturday morning at our local JDW. This was normally slightly later than the 8-9am slot mentioned by TM. There was invariably a large, red-faced gentleman, sat with a full bottle of rosé in front of him, chilling in an ice-bucket. He would hold court, presiding over a small group of friends, most of whom would be drinking coffee.

I sometimes wonder if that rosé lover is still with us.