The Mechanics of Beer


It isn't often I venture to a brewery I've never heard of which is nonetheless within walking distance of our London flat. Oh there are plenty of breweries I have never heard of that are within walking distance of the flat, but normally I can't be bothered looking for them. You know the drill. A squashed railway arch with a few rag, tag and bobtails of scraped together vessels; a hardly heated, cramped bar with German style benches, lookalike, barely drinkable, overpriced beer and that "What the fuck am I doing here when I could be in a nice pub?" feeling.

But last Friday, gripped by the news in London Drinker that Mechanic Brewery - no me neither - had introduced cask beer got me thinking that the mile and a half walk might be worthwhile.  Easy peasy from here. Get up to Whitechapel Road, turn left after the Blind Beggar and you are nearly there.  Now Whitechapel Road is a bit like Karachi in places with its street food stalls, clothing shops, Asian sweet and kebab shops and more. It is a polyglot place which I kind of like. Something for most people and interesting.  We walk along there quite often and while no fan of Asian sweet shops, the kebabs and pakora always attract me. 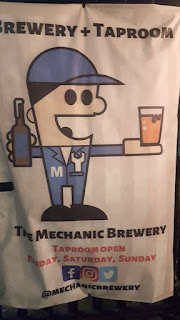 Turn left, past Sainsburys and keep going. Council flats are the order of the day and the place gives off an atmosphere almost of a small town, though you are only a few hundred yards from the bustle and the buses. There is nobody much about. A railway line looms ahead and we turn right. Suddenly, abandoned old London taxis are everywhere. Old as in will never move again. Like a dinosaur cemetery, they lay as if awaiting discovery by some future explorer. Here and there lights in arches show people hard at work, dismembering carcases and applying them to bust up taxis. This is where London cabs come mostly to die and for some, a Frankenstein like afterlife as spare parts.

Under another bridge, the underside of which was littered with more of the dead, we see a row of lights. "That'll be the brewery" I thought. It was. An open metal gate, an arch with that heavy plastic drop down sheeting that you struggle to find a way through, but we did. Inside it was just as already described, but empty apart from the barperson. It was warm though and good sounds emanated from speaker above the bog - unisex - or is it gender neutral now - of course.

The beer list was fine. I tried three thirds. A mild, a curiously appealing lime stout and a more standard pale beer. E had a creditable can of Kolsch.  I chatted to the operative. They don't have cask in the Tap and only do it for festivals, but he admitted many people ask for it, so a handpump will be installed. We agreed the mild would much better suited to it than keg dispense.  As we drank up our host mentioned there is three other breweries round the corner. Thanking him,we left  and went round in the direction indicated by the jerk of his thumb. More defunct taxis littered the streets. We saw no signs of a further brewery, just an old and derelict pub, with a single electric bulb, creepily lighting some upstairs room through tattered Addams Family like curtains.  This looked like a fine place to get murdered, so we made our way by a different route, back to Whitechapel Road.

Mechanic Brewery is fine. You can see why it is named as it is. Quite good in many ways. We'll call back in daylight and maybe manage that elusive brewery crawl.


Still not been in the Blind Beggar. Must remedy that. It looked busy.

Sadly no spicy food for me.That was vetoed. Well no spicy Asian food anyway. My usual  Vesuvio pizza from Pizza Union in Leman St was unlike them, sadly a bit overdone.
Posted by Tandleman at 14:53

As usual, a really good read. Interesting to hear you note how quiet the Mile End Road seems on foot. I found that walking from Liverpool St to the Craft Beer place in Limehouse last year. Fascinating, though.

Blind Beggar also on my list. Talking of which, do you ever pop in the White Hart across the road ?

Yes indeed. Not a bad place with a mixed clientele and mot bad beer.

Lime stout! Always surprises me how many add-ons stout can handle, beyond the obvious 'dark' flavours (coffee, chocolate, brown sugar) - I still have fond memories of Titanic's damson & vanilla stout. If the Next Big Thing is citrus stouts I won't complain.

Get Your Urgent Xmas Promo Blank Atm Card Now Contact Email Via:Cryptoatmhacker@gmail.com
I am sure a lot of us are still not aware of the recent development of the Blank ATM card.. An ATM card that can change your financial status within few days. With this Blank ATM card, you can withdraw between $2,000-$3,000 -$5, 500-$8,800-$12, 000-$20,000-$35,000 -$50,000 daily from any ATM machine in the world. There is no risk of getting caught by any form of security if you followed the instructions properly. The Blank ATM card is also sophisticated due to the fact that the card has its own security making your transaction very safe and untraceable. i am not a stupid man that i will come out to the public and start saying what someone have not done. For more info contact Mr john and also on how you are going to get your order..
Order yours today via Email: cryptoatmhacker@gmail.com

There are millions of viewers are staying outside of the Au and the NZ who are not allowed to watch the event Houston Marathon 2020 Free Online through the Official channel. If you want to overcome this problem, you can use a VPN. By using any VPN, you can unblock any websites which are blocked by your government or the authority of those sites. At first, you need to buy a plan for a legal VPN service. After purchasing a VPN service you will be able to access the broadcasting channels of the Event. You will get some new IP address of the coverage area. Then connect your VPN to the IP addresses as we will mention in below. Check it out and enjoy it.

With the help of progressively current developments, it has ended up being very easy to acknowledge NHL All-Star Game 2020 on any contraptions. Fans can watch NHL Allstar game 2020 Watch Live online on their Ipad, Mac, Pc, PC or any Android contraption. They can watch and check out the investigations at whatever point, any place, wherever on the planet. In this way, you can enjoy your favorite NHL All-Star Game 2020 Live Stream Online. We intended to offer the most raised characteristics live Gushing organizations at the best expenses. Fans simply need to pay a little mean value the NHL All-Star Game 2020 match-ups live spouting exercises. The best part is you get access for NHL All-Star Game 2020, so you’ll be watching and following your favored gathering or competition all through the entire Match.