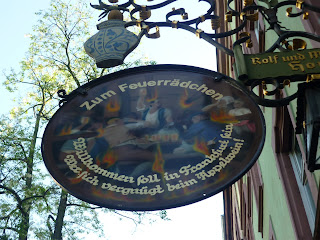 Sachsenhausen (not to be confused with the WW2 concentration camp of the same name, north of Berlin) is a suburb of Frankfurt. Unlike its neighbour just across the River Main, it mainly escaped the devastating air raids that saw Frankfurt's mediaeval, centre, the biggest in Germany, almost completely destroyed. This small piece of background perhaps explains why it is here, in this unspoiled, atmospheric, bohemian nook, that Frankfurt's night life and social quarter is based. Where we stayed, the twisted cobbled streets, with bars and restaurants galore, gave way to handsome, towering, Victorian tenements and tranquil streets enhanced every few yards by stately plane trees. Combined with the flower bedecked balconies, where residents were taking the air on a beautiful summer night, the call of birdsong and the sweet evening air, the whole area was to this author, simply enchanting.

Nestled in and around this area are Germany's cider houses. The best of them are around the grand, bustling, Schweizer Strasse and they too are quite stunning. Old, traditional and very reminiscent of Düsseldorf's Alt pubs, their narrow brick and red sandstone frontages invariably give way to a maze of rooms, corridors and courtyards. The best of them all is perhaps Apfelhaus Wagner, though its neighbour the Gemalten Haus pushes it close. In fairness, they are all damn good. Wagner has a large front room with dark wooded walls, long benches and more intimate tables, leads to a number of smaller rooms and courtyards where diners eat typically hearty food and drink the local cider. No beer is sold. On the left is the bar where all the action happens. There is a small stand up area parallel to it where you can watch the heavy stoneware cider jugs or bembels being filled. You buy cider by the glass or jug, but sharing is the way to go. At the end of the bar is a small schwemme or locals standing area, where ruddy cheeked habitués exchange noisy banter and commentary with the no nonsense waiters, who snap back gruff ripostes, but clearly love it. In a timeless scene, the multi faceted traditional glasses are filled from a height. The cider itself comes up by a sort of hosepipe from the cellar. One waiter fills the jugs, splashing the precious liquid into the waiting bembels with nonchalant ease and sliding them to white jacketed waiters who handle the heavy bembels with a casual confidence.

This is a place for the pub man as much as any I have been in. Though beer is not the drink, these are pubs. People come here to socialise with their friends and families. People watching, social discourse and laughter mix with the delicious aromas from the hearty meals. Every age is represented, from the soaks in the schwemme, to old ladies and gossipy young girls and lads who seem, on a Friday night, happy just to be there and part of it all, as was I.

I have said before in this blog that the most striking thing in Germany is the apparent social cohesion. This was it at its best - so much so that we returned again on Saturday to eat and enjoy the atmosphere again.

Oh and what of the cider? Very similar to a cider like Westons Farmhouse, with a slight cloudiness, a clean, unchallenging apple taste and a reasonable drinking strength of around 5.5%.
Posted by Tandleman at 10:48

Labels: Apfelwein, germany, Getting it Right
Email ThisBlogThis!Share to TwitterShare to FacebookShare to Pinterest

It's interesting that a pub in Germany can have a broad appeal offering a very limited range of drinks, whereas here pubs seem to have to be all things to all men. The days of the dedicated cider house (or indeed beer-only alehouse) are long gone in this country. It's quite a few years since the last pubs to hold out against draught lager gave up their resistance.

It highlights differences of both culture and marketing, though I'm guessing the whole "offer" is somehow more appealing and broad based.

Germany is still is lots of ways a touchingly old fashioned and innocent country with a firm sense of "place". Or heimat if you like.

There is still at least one pub holding out against the tide of draught Global-swill. The Queen's Arms, aka "Elsie's" at Cowden Pound, near Edenbridge still proudly proclaims "Lager not Sold Here", and long may this situation continue!!

They certainly do sound like the pubs in the Düsseldorf Altstadt.

The tantalising question for me is: why can't we do the same thing here?

I think there are two main reasons:

1. the obvious one, the dominance of pub chains, very few genuine free houses owned by a family over generations, let alone brewpubs.

2. the reluctance by pubs (inability in many cases) to just provide well-kept beer and not try to be restaurants, sports bars, discos, karaoke clubs etc. When I went to Düsseldorf last summer, I loved the fact that instead of fifteen handpumps to survey you just sit yourself down outside Schumacher or Im Fuchschen and the waiter plants a glass of some of the best beer you'll find anywhere in front of you.

I believe it is almost entirely cultural. I don't think it would work here for one second.