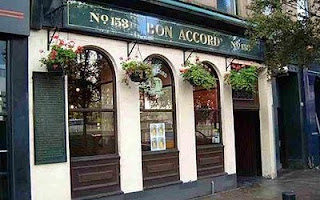 My first ever cask ale was consumed in the Bon Accord in Glasgow back in 1974. I can't say it was an Damascan conversion to the real thing. The grip of keg beer was too strong and cask ale in the West of Scotland at that time was as rare as a brass monkey's bollocks. It still is to all intents and purposes. The Bon Accord was not the only outlet for cask in Glasgow then, but it was by far the best. Over thirty years later, though changed inside, it probably still is.

I was in Glasgow at the weekend and of course when we left the train, I and an equally thirsty E nipped straight into the Horseshoe Bar in Drury Lane. Now this is a classic pub , with its patter, bustling atmosphere, vertical drinking and slick service, as well as its value meals. In cask ale terms it lags however. The offerings tend to lack lustre in both selection and quality. E got the better of the deal with her half of Deuchars, though you are painfully aware that if you have to praise Deuchars, you are deep in the doodah beer wise. My pint of some other nameless Caledonian brewed fluid could not be finished.

On the way to Queen St station, there is one other pub, the Standing Order, a JDW offering in a massive former banking hall. I quite like it, not solely because I can gaze wistfully on blown up photos of the banknotes of my youth, but for its buzz and the sheer chutzpah of its size. The quality of the beer however suffers from the copious volumes of Tennent's Lager and John Smith's swooped down. E declined, wisely as it turned out, to partake of any of the numerous dark offerings. My pint of Houston Warlock Stout was so tart and bitter that I wondered whether it was off or not. I just couldn't tell, but either way I couldn't finish it. Two pints in a row with undrunk beer left on the bar. Not a great score. ay back the next day, we stopped off at Charing Cross and headed over the deafeningly busy motorway undercroft, past the magnificent Mitchell Library and into the Bon Accord. It felt right, with gleaming brass handpumps, a gantry glittering with rare whiskies, a cornucopia of selection and eager bar staff. Our choices were both English. First up, the excellent pale and hoppy Bradfield Farmer's Blonde and then, E's preferred tipple, York Tettnang, which was clean, spicy and peppery. Both were very moreish and bursting with condition, so we did the decent thing and had some more, until the 17.40 from Glasgow Central nagged at us insistently to get moving. I know some complain about the hefty £3 a pint price, but for beer of this quality that you could not only finish but enjoy, it seemed a small price to pay.

Now here I have to say that a flagship pub and a classic pub are not the same thing, but if you'll indulge me, we'll save the "classic pub " argument for another time. What makes a flagship pub is a moot point, but they all tend to have several factors in common. I would venture that they are considered "best of class", a "mustn't miss" and they are renowned for choice, quality, service and dependability. They will sparkle inside, be warm and welcoming and be the sort of place to which other pubs ought to aspire. If part of a brewery, chain or group, it will be the one they are most proud of.

Of course not all pubs can be flagships, but all, like the Bon Accord, can strive to be quality places to go to. It is a pity so comparatively few seem to have even that modest ambition.

The mission statements on the pub's web site are exemplary too.
Posted by Tandleman at 08:04

Regrettably in many places in Scotland the vicious circle of poor quality leading to low turnover seems to be alive and well - although my recent experiences in Scottish Wetherspoon's were fine.

Welcome back. Glad to see the rumours of your retirement were premature.

get plenty of diesel fumes in the beer on a sunny day at the Bon Accord.Up there again next week,any new Glasgow pubs offering well conditioned ale? (other than the usual suspects)

I'd only not posted for a week Pen, but I suppose when you need quality,that'll seem a long time! (-:

Coxy - I don't know, but be prepared for disappointment.

Yeah, but the word was you'd retired. Anyhow, welcome back, handsome.

I don't remember when I first tried real ale but I would have been under-age, it would have been called 'bitter' and I probably didn't enjoy it. It’s strange how you persevere with certain things and I’m glad I did with ale.

Has it only been a week? Welcome back anyway.