Propping Up the Bar 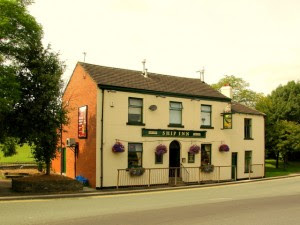 For a change on Thursday I phoned my mate Colin and suggested that most old fashioned of things, a tea time pint. We chose the Ship Inn because Colin lives near it, we know the tea time crowd and the landlord and it is directly on my bus route  In short, we know it as a convivial pub that is handy and where we know lots of people.

Now the tea time pint used to be beloved of the after work crew, though I'm guessing that isn't the case so often now, except of course in London, where almost everyone comes to work by public transport.  (As a particularly important aside, if more people went to work elsewhere by bus or train, it would surely be of benefit to pubs?) I used to like it myself, but for many reasons, I gave it up years ago, long before I retired from the daily grind.  Mostly it was because there was always that temptation to have one more than you should, and I felt it was a habit I ought to kick, despite enjoying the conviviality and the beery winding down.

The Ship still has a regular tea time mob, all living locally and all as far as I can tell either retired or dropping in after parking up at home. Few people at any pub want to chance even two pints and drive home afterwards, but where you have a relatively local living customer base, it is still the same cheery atmosphere I used to enjoy.  So I stood at the bar and joined in with it all - swapping tales of this and that - a bit of banter and of course a touch of gossip, as there is a fair crossover between the Ship and my own local. They are pretty near neighbours and it is a great little pub which I like a lot.

It is a pity that there isn't more of this these days, as it lifted my spirits and of course, unencumbered by work the next day and the strain taken by the 17 bus, I had half a dozen pints of Lees Bitter.  Maybe I'll do it more often.

Good for business too for sure.

I normally drink Bohemia Regent in the Ship, but the Lees Bitter was on good form. Unchallenging maybe, but I wasn't there to be challenged by the beer.
Posted by Tandleman at 08:40

'Challenging', in books, films or whatever, is a massively overrated quality. A sort of swotty machismo thing.

You managed to write that post without using the phrase "early doors" ;-)

Bailey: I am becoming increasingly contemptuous of such words, which are often used to describe the virtually undrinkable.

Mudgie: Only because it didn't occur to me. (-:

One of the things I miss about living in Stockport is arriving at home and nipping to my local pub for a pint or two of Robbie's Mild and a bit of banter early doors.

Doesn't seem to happen in the North East so much - my local doesn't even open til 6 or 7, or whenever the landlord feels like it. So we don't get there very often :-(

You missed pointless celebrities for that?

The problem with a tea-time session, even though I love 'em, is that when you get to a certain age it invariably means falling asleep in front of the TV later.
For me that generally means a disturbed night's sleep and always being awake at 3am which inevitably means a very long day ahead which, by tea-time, feels like later in the evening and another tea-time session beckons.
At my age and with no work in the morning to worry about the late night session suits me best.
Out at 11pm and home by about 1am with a solid night's sleep assured followed by a lazy lie-in listening to horrendous M25 commuter traffic hold-ups.
Of course, convivial and " relaxed " Irish opening hours help in this endeavour.
It's just a shame the beer is crap.

4 of us used to take it in turns to drive to work on a Friday and hit the hopwood arms on the way home 'for a couple'... The landlord was a lovely bloke from teeside called ozzie who i learned recently died some years ago.
This usually turned into a bit of a session, but in the 2-3 years of this tradition we never once ventured down to the ship.

I'm disgusted with myself.

ozzys sons got the ship now

Then there is the classic all-night session.
This is when a late-night session continues after the return home settling down to a few bottles of excellent Bengal Lancer with some chums.
Before long Amir Khan is involved in some fisticuffs in Los Angeles and this segues into continued coverage from India of the 4th day's play and before you know it is 11am and time for bed.
Three hours should do it before the Heineken Cup match I want to watch back in the pub.
Zzzzzzzzzzzz

The drink-drive limit hasn't changed since 1967. Two pints will no more put an average bloke over the limit now than it would have then - indeed probably less, because the average bloke now will be a stone or two heavier.

This decline in early-doors drinking is surely much more to do with increased censoriousness about alcohol.

Having said that, it's never a habit I've got into, and on the rare occasions I've done it, it's totally thrown me off my stride for the rest of the evening.

I wish I could have a pint on the way home. When I worked in Leeds, I did it three times a week, and like you say, it's a essential part of 'winding down'. Now I work in the 'burbs and there's no pubs en route, to be honest. Not only that, but I'd be on my own, which I'm not sure if is the right thing for 'post-work' drinks. Now it's more than likely to be something drunk whilst I make tea, or something to that effect. A shame, really.

The local pub, in the village where I work, has a "Happy Hour" between 5 & 7pm, where they knock £1.00 off the price of a pint. Seeing as the beer is normally priced at just under £4.00, it makes the place seem much more reasonable, and I wonder if they're trying to attract the early doors crowd anyway.

As I drive to and from work I'm not really tempted, and neither are any of my colleagues, but the Happy Hour's been running for over a year now, so presumably some people are taking advantage of it?

ps. Another reason for not stopping for a beer on the way home, is that my wife, God bless her, has my dinner waiting for me when I get home. It would be extremely churlish of me to be late for the sake of a cut price pint!

Wow, superb blog layout! How long have you been blogging for?


you make blogging look easy. The overall look of your web
site is fantastic, let alone the content!
Here is my blog post :: bypasses

I think people simply have too much to do in the evenings now and the soporific effect of a couple of early beers would render that impossible. Other than perhaps a Friday or Saturday, I never touch a beer until 8pm at the earliest. Sometimes its more like 10pm, simpyl because the evenings I'm not playing sport I'm catching up on the work I should have been doing when I was playing sport.