JDW's twice a year beer festival begins today, or, for those lucky enough to be in the vicinity of the Regal Moon in Rochdale, it began last night.  It is my usual port of call before our monthly CAMRA meetings and this time, I had been tipped off that all of the beers brewed by foreign brewers would be on the bar.  Reasons to try some then. 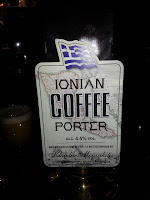 First up was Pivovar Kocovnik from the Czech Republic, which was pale and refreshing, but a tad dull, with no dominant flavours. The tasting notes describe it as "balanced" which it may well be, but it was nothing special.  Devils Backbone American Amber on the other hand delivered as much, if not more than it promised, with loads of juicy C hops and not as much malt predominating as the programme suggested.  Good stuff in fact.  The offering from the Ionian Sea was Corfu Ionian Porter, which had quite a bit of coffee and chocolate in a slightly thin body. Hops were there, but little of the promised citrus was evident.  Deschutes Twilight Pale Ale was certainly pale for an American inspired beer, but that was possibly its best feature.  The beer was thin, with obvious acetone and astonishingly dry.  Not great on this sampling.  Lodewijk Fly By Night was supposedly a Dutch beer inspired by Belgian Dubbels.  Not like any I've tasted, with a thin body, raggy malt and no real sign of the described ""wonderful emerging hop." Disappointing. 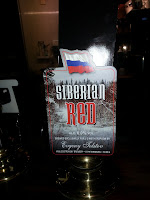 After an enforced break chairing our CAMRA meeting, I was back to sample the remaining three beers.  Good George Pacific Pearl is a Black IPA.  It had southern hemisphere hops, dark chocolate, pine resin and a decent body.  One of the better ones for sure.  Vasileostrovsky Siberian Red at a hefty 6.% was more the biz.  Lovely body, roast malt and hop flavours and just in fact as described, it was a very decent beer indeed.  This left just one beer before the bus.  Central City Racer Red IPA hails from Canada in inspiration at least. It didn't do what it said on the tin, as I didn't detect much by way of hopping, never mind "intense hops."  On this showing at least, not my cup of tea. 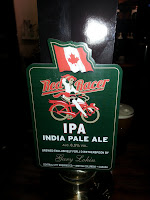 So there you have it.  A quick gallop through the foreign runners and riders.  I did feel some of the beers would have benefited from a little more cellar time, so remember, these are cask conditioned beers and will develop and change.  Your experience may be better or worse as the beer matures in the cellar.  It will almost certainly be different.

Do you think the foreign brewers really capture the essence of the beers as you'd like them to? I'm not so sure.
Posted by Tandleman at 10:27

Someone was telling me that this year's beer festival leaflet doesn't say at which British breweries the festival beers are brewed, which seems a little disingenuous.

You've been misinformed. It clearly tells you where they have been brewed.

From my limited sampling so far, I've also found the beers on the green side.

I hope this doesn't mean they stop serving the cheap Ruddles to free up a hand pump.

Mudgie and Tyson. The leaflet does NOT indicate at which British breweries the beers are brewed.

Oh yes it does! Here's the programme...

Though I guess you could argue that Banks's (for example) has multiple actual brewery plants in WMids.

I was thinking damn sure I'd read it in the leaflet they published last month, maybe the pdf is different to the printed booklet,but normally it has a little piece on the foreign brewers visiting these places...odd...even more odd having perused the list again looks like some JDWs were 'previewing' as early as Saturday

The leaflet I got in the pub does NOT show the brewery of origin no matter what your pdf might show.

The one in the pub is clearly different. Not saying it is a secret.

The PDF is much better. The printed version is very brief and poorly laid out. Quite cheap looking, in fact. Whilst the PDF is bursting with information. Digital media 1 Hard copy 0

Ah-ha, there must be a shortened version as a flyer, perhaps done by or for the individual pubs.

Answering your concluding question, I had the Corfiot porter & the American amber ale last night, & I thought the porter was fine but totally unremarkable; I've had better coffee porters, never mind porters generally. The Q of whether the damn furriners get the essence of the style doesn't really apply in the case of the AAA, though. Like you, I thought it was good, but by the time I was halfway through I wished I'd ordered a half - the way AAAs turn everything up to eleven gets a bit overpowering for me.

These foriegn brewers are taking a big gamble brewing a beer for Wetherspoons.Most have damaged their reputations rather than improved them by brewing dull beers.Remember Stones ipa from a few years back.Now that was a cracker.

Glad to hear good things about the Devils Backbone beer, especially as they are one of my local breweries here in Virginia, and damned good to boot!

johng, I remember the Stone well, Sheps brewer must have had a heart attack when he saw hop profile - probably used up a year's supply

sadly no-one since has come close - probably at least partly related to Spoons' purchase price policies. I think the worst example though was when the lady from Bend brewing came over and said something like 'I brew very hoppy beers at home, but for the UK I know I have to brew something more balanced'... Er, NO! The point of flying in foreign brewers is surely to brew their beer, not to come and brew something exactly the same as what 90% of our brewers are doing!

I'm hoping to have a crack at this at the weekend, though I fear nothing offered this time will top the Freeminer Deep Shaft Stout found at the last festival...that may have been my pint of the year, if I'd have found it in the first pub I visited I doubt I'd have moved on!

Sheps Stones Double IPA was, I think, one of the best beers ever brewed in this country. Certainly miles better than anything else Sheps have ever done.

I actually quite liked the (also Sheps) Central City Red Racer IPA when I tried it last night. Not as 'big' as I was hoping for, but had the transatlantic flavour profile I was hoping for.

The Coffee Porter is a strange one. Very thin beer until the very end where the coffee comes through strongly in the finish. Completely the opposite of Titantic Cappuccino which I tried at the weekend, where the coffee is front-loaded and hits you on the nose.