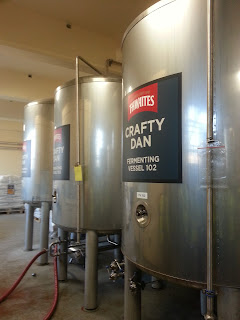 Set in a very cramped town centre location where it has been since 1807, Daniel Thwaites is one of the biggest, if not the biggest of the surviving family brewers, owning around 350 pubs. You won't find a Thwaites on the board though, the family name having been Yerburgh since the female line inherited and married one. It is still firmly family controlled however.

The brewery itself is rather large, with a lot being crammed into the site. When I visited it last night though, it wasn't to see the large automated modern brewery it has become, but the fairly recently installed "Craft Brewery" where, shall we say, the more interesting beers are brewed. Set in a spacious part of the brewery, this self contained 20 barrel plant is in no small measure where Thwaites sees a major part of its future. Our guide was at pains to point out that when he first started doing the tours, the brewery only used five different hop varieties and now uses at least 25 to produce a range of 12 "Signature" seasonal beers plus quarterly beers and "one offs". In addition experimental, development beers and beers commissioned by individual customers are produced. The plant itself is a full part of the production of the brewery, as its beers mostly go out to trade, but this is very much a hands on operation. We did visit Fermentation Room 1 in the main brewery, where a large number of traditional open squares produce the brewery's main output of Original, Nutty Black, Lancaster Bomber and of course Wainwright's which is now their biggest selling beer.  The brewery is very self contained, with all racking, bottling and kegging done on site. 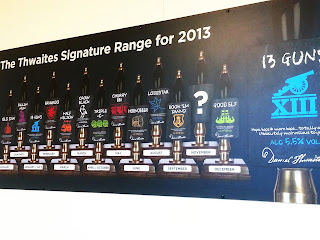 In the bar, we (National Winter Ales Fest workers) enjoyed the hospitality of the brewery, with Original, Bomber, Wainwrights, TBC and BB1 on offer. BB1 and TBC (Thwaites Best Cask) are produced in the micro brewery with the others coming from the larger main brewery. All were in the tip top form you'd expect and I particularly enjoyed the dark BB1 (it's their postcode) which has added cherries and a touch of sourness, at a very drinkable 3.7%. Think Belgian Dark Mild and you won't be far out. It was enjoyable too to talk to the very enthusiatic team that looked after us and to glean snippets of interest. Thwaites, like many others including Lees have more or less got out of the contract brewing game, as margins are so low. (Most supermarket beers are brewed by the likes of Burtonwood and Robert Cain) but they did brew (off and on) Punk IPA for you know who and still contract bottle and can as  required. 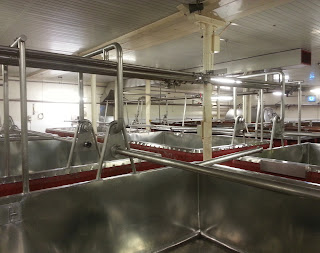 I first visited this site over 20 years ago and last night may have been my last chance to visit the brewery again, as it will move in the next couple of years to a new, less cramped green field site near the motorway,  as soon as planning permission has been gained for Sainsbury to buy the site, knock it down and build a supermarket. Oh and of course for Thwaites in the meantime to build a new brewery.  A shame, but one thing is for sure. While the "old" brewery will be scrapped, the craft brewery will be dismantled and taken to the new site.

Thwaites see producing a wide variety of interesting craft cask beers as very much a part of their future.  Craft Cask?  Of course and why not?


We were all given a lovely 3 pack of a new beer too.  Name?  Crafty Dan.  It is made with UK and Munich malts, Amarillo, Pacific Gem and Fuggles hops.
Posted by Tandleman at 18:38

I can vouch for the BB1 - a dry dark mild (no sweetness to speak of) with just an edge of cherry flavour; very interesting and very drinkable (the two don't always go together).

From the pump clip, the name actually appears to be "Cherry BB1", which I think is a mistake - I nearly didn't order it, thinking it would be a full-on fruit beer. I hope the mild-drinkers of the northwest aren't collectively put off; anyone who likes Holt's Mild or Owd Oak (and lots of people evidently do) should go for this in a big way.

Thwaites was the very first brewery I visited. This was back in 1974, and I believe the brew-house was only about eight years old at the time; having been completely re-built in 1966.

There was no sampling room, but we were treated to several pints in a pub next door. Happy days!

Will they have open squares in the new brewery?

I've been nothing less than impressed with every cask of 'micro' ale that Thwaite's have produced; from the Triple C to Good 'Elf. And Tavern Porter is, imho, one of the best bottled porters on the market. A great brewery and they seem to pitching the new brewery just right, without losing identity or trying to be something they aren't. It helps, of course, if the beers are excellent.

Thwaites are my favourite UK brewery by a country mile.

Ron. No. Covered squares in the new one.

Paul: That was the second last major reconstruction. They have a very nice hospitality suite now.

Leigh: The thng is they have gone into it with full commitment and allows the brewers to do what they want. No half hearted tweaks of the bitter here.

If the beard club advertised "get pissed for nowt" they would double their membership overnight. Think on.

Lots more people would sign up if they knew how many of these free piss ups occur.

nice to see the small plant, they're definately the best of the regionals.
critch liverpool organic

Nail on head, Tand. They've just not created 'cool' labels and jargon on the bottles. Each beer stands alone and blends the expertise they have at their disposal with a genuine desire to create something new.

Thwaites produce some nice monthly ales. The Half Nelson is a favourite - superior to Wainwright in my opinion. Fallen Nun was another superb tipple. Interesting blog, as always. Finally, have to say East Lancs boasts two, fine large brewers. Moorhouse's are definitely on a par with Thwaites - in my humble opinion. :-)