Like all non brewers that have been in and around beer for a long time, I have visited countless breweries and had the process explained to me a thousand times.  I often feel when in a new brewery (to me), that apart from the history and background, I could fairly easily conduct the tour myself.  But I've never been involved in a brew from beginning to end, though I've seen more or less every bit of it in segmented form. 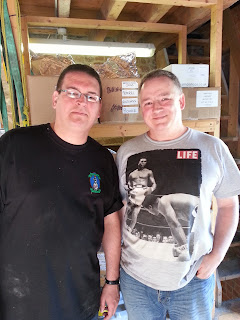 Thus I leapt at the chance to do an end to end brew with Allgates of Wigan and the additional chance to input to a recipe that we'd brew.  The "we" in this case was fellow bloggers Tyson the Beer Hound and Jim from Beers of Manchester, along with brewer Jonathan Provost and co-owner, David Mayhall.  We assembled at the brewery last Saturday in glorious sunshine, with a pre-agreement that we'd brew an oatmeal stout of around 4.8% and it would have some hops in. Lots of hops.  We started with a brew of course - tea - and without much further ado, yours truly was dumping sack after sack of malt into the hopper.  We'd agreed on the grist which was 175kg of Maris Otter Pale Malt, 10kgs each of roasted barley and chocolate malt, 25kgs of malted oats and 8kgs of torrified wheat to help with head retention.  I was glad that my plea to replace the intended crystal malt (boo) with roasted barley had been accepted. I wanted this beer to be pretty damn dark and no stout is a true stout without a good glug of roasted barley in my opinion at least.

Now Jim, swot that he is, has detailed what we did in his blog, so I won't repeat it.  You can also read Tyson's account here. It was hard work interspersed for us at least, with glasses of excellent Allgates beer, a picnic lunch and of course, as always when with beery types, the most friendly and cheery of conversation as anecdotes were swapped, theories expounded and tales told.  Much shovelling of spent grains, carting of heavy sacks and general cleaning up ensued and all too soon we were adding the yeast and the brew was in FV1 and beginning its transformation into what we hope will be a fantastic stout.  Bittered with Warrior and Galena hops and with aroma coming from Amarillo and Ahtanum and finally a good sized dash of  Nelson Sauvin we have high hopes of an excellent hop profile. We are aiming at 55 IBU. 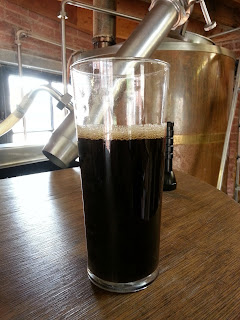 David surprised us all by a very kind offer of a nine of the finished beer for each of us, to be sold at the pub of our choice for a charitable donation by the pub.  That is tremendously generous of him and once again re-inforces that those in the brewing industry are princes amongst men. When I have sorted out destination and charity, I'll announce here where it will be sold and when as no doubt the others will too.  The name of the beer has now been agreed and in accordance with Allgates practice will be named after a defunct colliery in the area, so a big "hello" to Quaker House Oatmeal Stout.

Saturday really was a fantastic day out, with great people.  Thanks to owner David and Head Brewer Jonathan  for their hospitality, expertise and friendship.  We really couldn't have done it without you.

We were also meant to be joined by Jay Krause of Quantum, but regrettably he was unwell.  Hope you are better now Jay. Phtos show my fellow bloggers Tyson and Jim and of course the stout, straight out of the copper.  Looks great already!
Posted by Tandleman at 09:26

Will look out for it and sink one if I see it, you can't beat blogger beer!

Much better now, thanks Peter. I'm looking forwards to trying this - absolutely gutted to have missed the brewday. I guess we'll just have to do another!

That's the best pic of me I've seen in ages!

An excellent day and an (as usual) excellent read.

Nice meeting yourself and Tyson. Let's meet again when it hits the pumps!