I was rather pleased to visit Matt Holmes of Ramsbottom Craft Brewery to brew a beer with him. Matt brews in a small but perfectly formed two barrel plant in the garage of his home in deepest Ramsbottom.  It has everything you need from mash tun to hop store, all within easy reach and as a bonus he doesn't have to go far to work in the morning or home later. 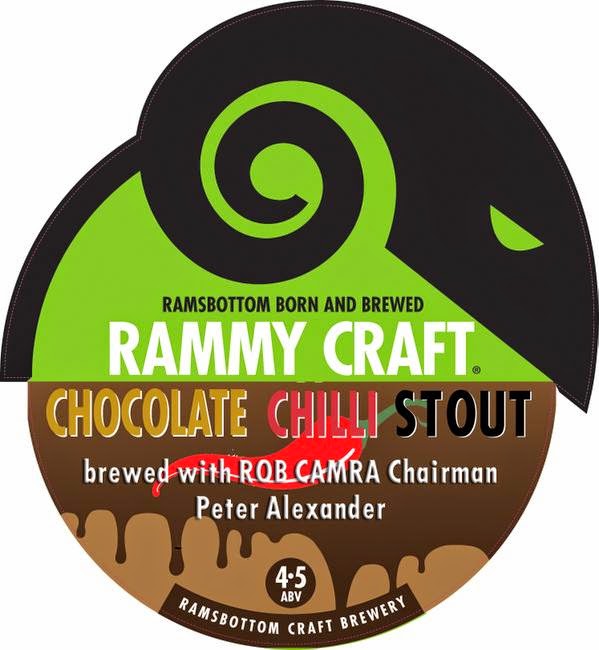 The beer chosen was a Chocolate Chilli Stout. On the side I'm a bit of a stout fiend. The only other brew that I've had a recipe hand in was with Allgates of Wigan and that was a stout too - and a bloody successful one that has been brewed more than once. I see a pattern emerging.  Now one thing I always think that stout should be is black. That means, to me at least, that it should have roast barley in it. I know you can piss about in other ways to replicate the colour without the "burnt" flavour, but then to me it isn't really a stout.  I know in purist or historical terms that's not so, but if you want me to brew a stout, it will be between four and five percent, be black as the ace of spades and it will have a resinous hoppy finish and be a bit dry.

We decided that the chilli should just be a hint, so Matt prepared some fresh ones and we also had actual cocoa nibs too.  I won't bore you with the brewing details, but while it was all boiling away we took the opportunity to sample some of Matt's bottles. They were good. A list can be found on his very informative website here.  I can particularly recommend Oh Sunny Day and the wonderfully named Flaori Maori made with New Zealand hops as you have no doubt guessed.  The Chocolate Chilli stout  - which had to be re-chillied as we were determined not to overdo it - has just a prickle of heat and is otherwise a classic bitter stout. It was all sold out in advance as Matt's casks tend to and made its début at our CAMRA do referred to in this post. It was very well received on the night by the assembled drunks beer experts and has gone down well subsequently elsewhere, with positive comments. Want to try it? You might be too late for the cask effort, but it will appear in real ale in a bottle form soon. Contact Matt if you are in the area and fancy some.

Stout. Mmm. Under-rated and yummy. We need more of it.

The fact that I had a hand in this beer has certainly influenced my views.  Still a good beer mind.  Of course it is greatly enhanced by perfect cask conditioning and a tight sparkler to produce a classic creamy white head. That and the fact that Matt knows his stuff.  To labout the point, stout just isn't stout without that creamy head.
Posted by Tandleman at 09:39

If I see it I will neck it as I am an avid necker of owt the Tand recommends or hawks.

One point, though, would be useful for Tandy beer spotters. If you wish to use your name, could you have an aka Tandleman on it? This would make it easier to spot and allow us to ask for "a pint of Tand" or "Have you any Tand on?" or "Can't you get some Tand in?"

Of all the blogger grog, Tand is the best. The muck produced by the likes of Dredge, Pete Brown, Cole, Tierney-Wassit can give blogger beer a poor rep, but Tand grog shines like a beacon of light through the fog of crap and is something to trust.

Think you are being a bit unfair on Dredgie there Cookster! (-;

This sounds good. I love a chilli stout. Had a few pints of one from Magic Rock in the Southampton Arms earlier this year. Also I was lucky enough to taste one from David Saunders, who very soon will be launching Kew Brewery.

PS. Cooking Lager is way too harsh on Mr Dredge who has pretty impeccable taste in beer (I say that because they tend to match my own)