Micropubs are a big thing in Kent it seems. There are loads of them and I had my first real introduction to the genre earlier this year in Broadstairs, at the invitation of my mate Erlangernick, who despite living in Franconia Germany - a good looking place with the odd nice beer or two - has developed a liking for Kent and in particular, the area of Thanet. Having visited twice now, I must say that it is a fairly likeable area, though I suppose good weather on both visits didn't harm things.  Ramsgate is, to be honest, a seaside town that has seen better days, but which now seems to be on the up and up, with many houses festooned with scaffolding and builders hard at it renovating like mad.  There's a lot of pubs. 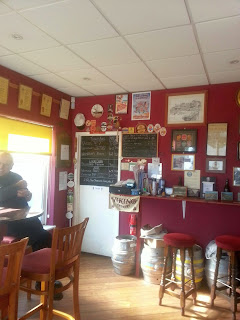 I came down from London on the high speed Javelin train which was extremely comfortable and quick given the distance.  Perhaps Londoners will latch on to its speed and convenience as a consumer dormitory? The station is a bit out of town which is a bummer, but having met up with Nick who is a bit of a Thanet expert, we set off on a beautiful autumn day for the centre and beer. The walk took us past the first pub of the day, the Conqueror, on a street corner and beckoning invitingly. It was after noon - well just about - so in we went, to a large square room. That was the pub, decorated with brewery memorabilia and photos of PS Conqueror, a paddle steamer of some renown and affection.  The owner who was waiting on, pointed out his grandfather sitting amid the group of cut throats who were the crew.  It was cosy. Nick might have said "gemütlich". It would have done nicely.

We settled down with cool, well conditioned half pints of Green Hop Ale from (I think) Westerham Brewery and jolly nice it was too, though I'm not sure that the green hops add anything much.  So good I had another as we chatted to the owner, Colin Aris, who was a very amiable person indeed. He and Nick nattered about this and that brewery and pub that they knew about, while I threw in the odd remark and enjoyed the memorabilia on the walls.  Colin ribbed me gently about the Baum in my area winning Camra's National Pub of the Year and beating him into second place. Ah yes. Sorry about that.

It was a good start and things actually got better. Ramsgate impressed.

More of micropubs and just small pubs next time. I didn't get a bad pint all day. Oh hang on. I did, but it was the exception rather than the rule.
Posted by Tandleman at 09:42

About time you discovered Thanet - some great pubs outside of the micros which are fine. Will be interested to see what you thought of Great Tree if you got that far.

It was great of you to spend the day there with me (and a bit of it with B), and I'm delighted you enjoyed it as well as you did.

About the town...it hadn't occurred to me that there's that much renovation going on. Is it that remarkable? People seem to be of the opinion that Ramsgate's up and coming. Though, most people I meet seem to be London refugees.

Was I that chatty with the (micro)landlord? I was sober at that point. Hope I didn't actually say "gemütlich". I wasn't sure if you'd like the place on its own merits, a former flower shop. It was only one of a handful of visits I've made there, and it was the only one where the place was empty. I've never had a beer there that wowed me, he's got a more conservative taste than other microlandlords seem to have. But it's homey.

The Great Tree...not sure what the Tand would make of it. In about 8 weeks spent in Thanet in the last year, I've made it there once, and after that, I'm not sure what to make of it myself. Yes, the lady of the house did breeze through with her husband and funny little dog that annoyed ours. She didn't break into opera though.

Knackered after 10 days in Poperinge, Broadstairs, and Monschau, having driven home from the latter today after insufficient coffee in the morning.