Perhaps living in Manchester (well nearly) I should be aware of Hydes Brewery's seasonal range under the "Provenance Brewing from Hydes" banner, but sadly I wasn't.  That was corrected last night, in emphatic manner, in our temporary Wednesday night HQ, the Flying Horse in Rochdale.  I arrived just after nine to a fairly busy pub, still adorned with its full Christmas decorations, lights gleaming cheerily and incongruously. On the way I had passed and noted the merrily twinkling Official Borough Christmas tree, shining out in the pissing rain.  Enquiries revealed that this delay is to include and celebrate Ukrainian Orthodox Epiphany, which apparently is a big thing in Rochdale and will delay official end of  shenanigans until the 19th of January.  I may of course be having my plonker pulled, but there you go - that's what I was told. Don't say I never tell you anything useful. 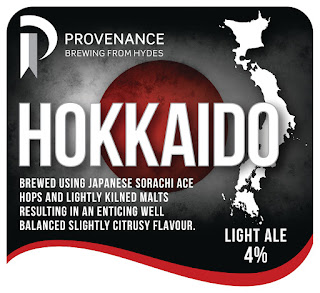 Recommended to me by the landlord, Hokkaido is a pale, hoppy, citric little number, containing that most difficult of hops Sorachi Ace.  In my experience Sorachi Ace is a hop that you love or hate and it displays itself to me as either revolting - or bloody brilliant when it is done right.  Variously described as "having intense lemony flavors, Sorachi Ace also runs the gamut from white flowers, dust, and tea, to bubble gum, dill, and coriander. This hop is ideal for IPAs, saisons and wheat beers."  As it happens, Hydes had used it for a pretty straightforward hoppy golden ale and boy did it work.  I always feel that Hyde's beers can be relied on for their wonderful full body and so it proved here. Nothing wishy washy at all, but a backbone of malt that stood up to the hops particularly well.  Lemony, slightly herbal (coriander) and very moreish, most of us switched to it. I stuck with it until chucking out time.  It was a great decision and also, to the delight of some, on offer - I know not why - at a mere £2 a pint.

On this performance, Hydes is well overlooked. I must correct that with more frequent visits to Manchester.

The full Hydes range for 2016 is here. Worth a look I say.  The Regal Moon, our usual haunt, is still closed after the flooding. I'll keep you informed of progress in due course.

The title of this post is a nod to the Beer Nut and one of an occasional series.
Posted by Tandleman at 15:55

You won't get a range of beers, just the Original. But The Jolly Angler should be on anyone's list of pubs to visit in Manchester.

Glad to hear the Jolly Angler is still going, beersmanchester. An interesting range of beers from Hyde’s, but possibly too many to be sustainable in the longer term.

Will these "craft" ales be at the Grey Horse, or would one have to head to that one posh place up in the Northern Quarter to find them?

Found this in grey horse m/c. Crystal clear v nice but preferred what the Smithfield offering.
Cheap beer u say , Bulls head ,Heyside royton have a Howard town porter at £1 per pint.

I also found it at the Grey Horse, as well as at the posh hotel place, the Abel Heywood. LIKE. And what a job Hydes have done with the place, obviously invested a fortune in it. Excellent steak pie & chips, too.