The Annual General Meeting of the Foreign Beer Bars (BSF) from the Great British Beer Festival took place earlier this month in Sheffield.   We meet to plan how we'll do things next time and review what we did right and what didn't go so well at the last event. Like all these things, it doesn't just happen, but is thought through as much as it can be and it all takes place through considerable human effort.  I haven't told you about it as I've been ill ever since. Not through too much beer, but caused by a viral infection from which I am slowly recovering. Still, I am better enough to mention a couple of things before they fade like all endearing charms tend to. 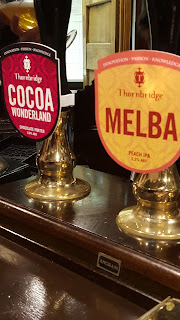 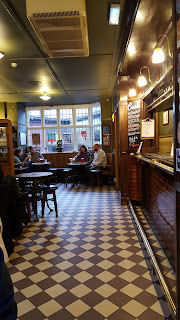 There were three of us attending from Manchester, but one didn't make it out on Friday. He was ill with a viral infection. You can see where this is leading can't you?  Still, a mere 50 yards from our rented front door was, glory be, a Thornbridge pub, the Bath Hotel. Now how's that for lucking out?  The pub itself was a delight and even luckier was that it had two rather unusual and excellent cask beers on. We called in with the aim of trying a couple of halves. Melba IPA (5.2%)  had more peach juice flavour than most peaches do. If you like a beer that is just peachy, well this is your man. It was peachier than a peachy thing, but still refreshing and tasty, though perhaps just a little overdone. We enjoyed it but moved on to Cocoa Wonderland (6.8%).  Now it isn't at all often a beer stops me dead in my tracks, but boy did this do so.  It was stunning. Like a bitter chocolate ice cream with so much depth and complexity, we were rendered speechless.  The brewery describes it as "a full bodied, robust porter with natural mocha malt flavours from the complex malt grist, complementing the decadent additions of real cocoa beans to the maturation process".  Well, if they say so. It was just a chocolate infused dream of a beer. Those that reckon that cask conditioning can't handle this strength of beer needed to be there. No carbonic bite, just a tight creamy head, a melting chocolate malt body and all that wonderful flavour.  Truly magnificent. The best beer I've had this year by a considerable margin. We had to stay for more and indeed returned for more later. 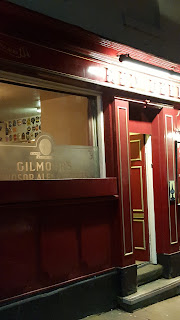 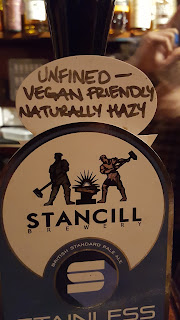 I'll tell you about other aspects of Sheffield in another post, including our trip to Thornbridge Brewery itself and a bit about where the meeting took place, but I must first mention another fantastic pub.  The Red Deer, an unspoilt traditional pub just off West Street.  Not only is it a lovely multi roomed boozer, but it has the kind of easy going atmosphere and mixed crowd that makes you want to stay for more than one. So we did of course. We sought the barman's advice on some of the local brews and he knew his stuff and couldn't have been more helpful.  We settled on Stancill Stainless after being reassured by said barman.  Described as "Unfined, vegan and naturally hazy." our antennae were finely tuned into trying to discern something decent amid the murk. Instead we were presented by a perfectly clear, beautifully balanced best bitter, lush with malt and with a big Cascade hop hit. Poise, balance and elegance.  Class in a glass in fact.

So, three things if not learned, reinforced. Cask conditioning can be just the dab for rather strong beers if the brewery and cellarman know their stuff. Unfined beer does not have to look like chicken soup if the brewer and cellarman know their stuff and good pubs and good beer, when mixed correctly in the right proportions, attract the right crowd and are a winning combination.


Note the Gilmour's Brewery window in the Red Deer photo.  I understand too that the Bath Hotel has its interior listed as being of national importance. I can see why.

I won't mention the very unwise kebab, or how messily it was eaten either.
Posted by Tandleman at 17:01

There's a chocolate shop/café in Sheffield called Cocoa Wonderland that collaborated on the beer. Each year from October 13th to October 19th it’s national chocolate week apparently which is when it was originally brewed. They’ve mixed stout with Prosecco – their “black velvet cocktail” and suggest making their Thornbridge chocolate porter into a beer float – serving it in a glass with ice cream!

Glad you found and enjoyed the Red Deer. Was thinking of suggesting it, but figured you would find it anyway, being housed nearby. We loved the place when we spent a week nearby, in a flat upstairs from the Hop.

Mixed feelings on Thornbridge's taking over the Bath Hotel. It was nice having it a free house before, but then the guests we've enjoyed there afterwards have also been great. A classic place.

God, I love that town.

Two very different but excellent Thornbridge beers. When they are on form, making fantastic beer is like childs play to them.

Even the mediocre Thornbridge beers are decent enough in the greater scheme. One does wonder what the world would've been like if Martin Dickie had stayed on instead of going off to do his own thing...