Up the Garden Path


Bosnia was reassuringly cheap, but what about Dubrovnik? Dubrovnik, just over the Bosnia-Herzegovina border  is one impressive place.  Well preserved walls, glamorous with tremendous eye appeal, a number of picturesque harbours with red roofed villas, climbing up mountainsides, it has everything. It even has craft beer. And lots of tourists.

We spent our last holiday night there and after a wander round the walls - well some of them - there are miles of the things - a beer was required. We had no Croatian money, but a quick visit to an exchange point and with €20 worth we thought we were good for a couple of drinks each. Dinner was going to be a credit card do. Foolish Tandleman.  As we wandered we spotted a little bar with that most alluring of signs "Craft Beer".  Razonoda looked fairly small, but well appointed and almost empty.  Apart from us there were three others. It turns out to be part of the very posh Pucic Palace Hotel.  Google is your friend. 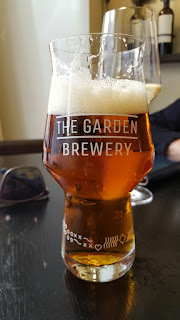 I chose a draft pale ale from Zagreb's Garden Brewery. A third of a litre and pretty good it was too. Sort of Sierra Nevada Pale Ale in style if you know what I mean.  The wine list was comprehensive and meaningless if you, like us, don't know Croat wine. E chose one in the middle of the range. The measure was 0.1 of a litre, making what I first assumed to be a damp glass, a pretty expensive drink. At £6 a glass that's £60 a litre. I reckon Jeff Bell would admire that GP. My beer was an unknown quantity price wise. It wasn't on the menu. We lingered over our drinks and paid up. The waitress asked me if I'd like to pay by credit card.  Looking at my paltry sum of Croat dosh and the tab, I agreed with her suggestion.  Converted it was a tad under £12. Our subsequent meal was pretty dear too, but in our rather nice hotel, drinks were under half the price and the wine was in little 200ml bottles. The beer was reasonable too.

Sadly there was no craft, outrageously priced or otherwise.

My oldest friend who has recently returned from Croatia assures me prices are much more modest away from Dubrovnik, but he encountered no craft. I'm sure too that better prices can be found in Dubrovnik

At least my £10+ a pint beer wasn't murky and I did enjoy it. Craft eh? You have to admire the chutzpah.
Posted by Tandleman at 19:08

Good to see it's not just our chain pubs jumping on the "everything is craft" bandwagon. That Razonoda looks posh, would have been a bit like having a bottle of Little Creatures for a tenner in the Midland Hotel in Mcr I guess; worth it for the experience.

Dubrovnik was always expensive compared to the small bargain towns to the east we stayed in a decade ago, when the beer was well under a quid a half litre. A gorgeous place. I must go to Zagreb. And Albania.

Spent 2 weeks in Dubrovnik in August last year. Average price inside the city walls was about £4 - £4.50 a pint. Even in Soul Caffe, one of the most expensive bars and our regular haunt, it was still about £5. You really know how to get yourself ripped off :-))

I have a nose for it. Well the Mrs has in fairness.

Croatia is expensive in general, which explains why Czechs heading to the beach take their food and drink with them in the car. It was such a problem to the Croatian authorities that they actually banned bringing personal foodstuffs into the country, not sure if the ban is in place, but I know plenty of Czechs who decided to get their beach time in Italy instead.