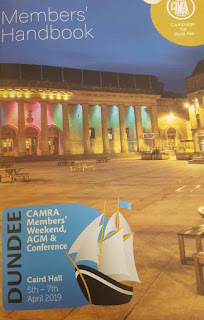 When I was very young my grandfather lived in Glamis - where the old Queen Mum came from - and where he used to be Station Master - the treat when we didn't go to the nearest real town, Kirriemuir, was to go to Dundee for afternoon tea. I have vague recollections too of visiting the frigate HMS Unicorn, a preserved sailing ship, when I was about ten, but I haven't been back since then, apart from a couple of nights knocking doors as a Social Security investigator in dodgy housing schemes on the outskirts late at night.  Oh and one night at Dens Park watching a dire game against Kilmarnock I think. It was thus, with considerable pleasure to me, that CAMRA decided to hold its AGM and Annual Conference in that fair city.

It's a lovely place. A delightful setting on the Tay, handsome old buildings and streets including the excellent Caird Hall where CAMRA held its business.  We stayed in the really rather good Holiday Inn Express on the front opposite the Tay Road Bridge and handy for everything.  Our nearest pub was the St Andrews Brewing Company outlet which was rather a fine place with lovely interested staff, but no real ale. Still, you can't have everything and the keg offerings were fine in small doses.

As always is the case there was a Beer Exhibition inside the Caird Hall for members and the beer, all Scottish and Irish apart from one, was all in very good nick, though we didn't spend too much time drinking there.  We did though try a few of Dundee's pubs, both real and not and have to say again the warm welcome was an object lesson for many whose failure in this area is noticeable.  I particularly liked the Pillars, a pub with the warmest of warm welcomes, excellent regulars and a free juke box when we were in. With serve yourself (yes) handpumped ale on two handpumps just outside the bar, it was hard to tear yourself away.  A stones throw from there was the excellent Phoenix, another great bar with excellent real ales and plenty CAMRA types therein. 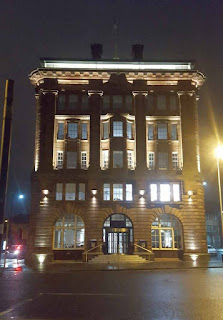 The conference itself was somewhat dull if truth be told.  I did attend the whole thing and spoke (ineffectively) against the daft motion (which was passed) putting CAMRA on the wrong side of the minimum pricing debate.  Still, it was good to see old friends and maybe that's the real point?

Broughty Ferry was our Sunday destination though by then it had turned a bit drizzly and dreich. The pubs were fine though with the Fisherman's Tavern being the pick of the bunch, though an honourable mention has to be given to Jolly's Hotel, a Wetherspoon with an astonishingly eclectic mixture of drunks and ne'er do wells. It kind of reminded me of Middleton, which was touchingly rather homely.

So Dundee. I didn't see as much as I'd have liked, but I'll be back. Do go there. I recommend it.

I didn't get a chance to visit any of the many bakeries in Dundee, but I did have oysters and fancy fish as well as a very good, but not Punjabi curry.

Oh and I did see statues of Oor Wullie, Mini the Minx and of course Desparate Dan as well as the home of DC Thompson (left), so overall, I was content.
Posted by Tandleman at 14:41

As you say, the warm welcome was an object lesson for many pubs. Even when the beer wasn't great (more due to no-one drinking it I think) I couldn't fault the staff in Dundee, Tayside and Fife.

G;ad you enjoyed the weekend.

DC Thomson were known in Dundee for not recognising trade unions and not employing Catholics.

Lots of bad things happened in the past.

Amazing post with lots of informative and useful and amazing content. Well written and done!! Thanks for sharing keep posting.