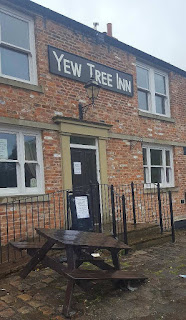 I may have mentioned it before but Sam Smith's,  through its takeover of Rochdale and Manor Brewery, have a lot of pubs in my area. They also, in common with Sam's elsewhere, have a lot of closed pubs, with the usual sign in the windows "Management Couple Wanted - Live In". Thus was my plan to visit the Yew Tree, a fine and imposing pub between Rochdale and Royton thwarted. The pub was closed, awaiting the next hopefuls.

But you are never too far away from a Sam's boozer, so I went back towards Royton to one which is well known to me - it is in fact probably the closest equal pub to my local the Tandle Hill Tavern - but is in the opposite direction for Tandleman Towers. So, oddly, despite my thirty odd years in the area - and knowing many who go there, I've never set foot in the place. Time to rectify this oversight.

The pub, The Pleasant, is on a main road, a rather modern looking building in a residential row.  Pretty ordinary really.   As I approached at teatime in pissing rain, a fellow imbiber entered with me. At least I wouldn't be on my own.  To my left a door said "Lounge" and right another said "Snug". My companion turned right and I glimpsed a pool table. Hmm. I don't think I've ever seen a pool table in a Sam's pub. I thought Humphrey scorned all forms of entertainment for the masses, but there it was. "How odd" I thought, turning left into the lounge. 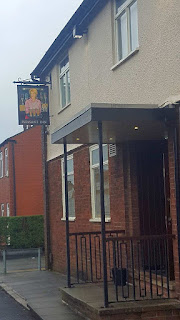 A rather bare, but comfortable room greeted me. A sole drinker sat reading a newspaper, glancing up and nodding to me. The room was served by the same bar as the snug, in which I could see four workers in various degrees of highvizness, overalls and whatnot, bantering cheerily. So not that busy then, though I do know Sundays are popular. I should have gone then probably.  Still we have to work with what we've got. The woman serving me remarked on the unseasonality of the weather - and being British and knowing the correct style of response, I agreed, adding for good measure some disparaging remarks about the quality of the summer we've just had. So all was well. My pint of Sam's Light Mild (perhaps a little sharp) was a mere £1.34.  Looking round there was the usual number of prohibitions on the wall. No effing and jeffing, no phones, laptops or downloading music (why?) and a reminder of how long you had to sup up at closing time. This seems a somewhat repetitive obsession of Messrs Smith, but there you go. At least you know where you are. Beers were Light Mild, Taddy Bitter, Old Brewery Bitter, Alpine and Taddy Lagers. The famous half Alpine, half Taddy was the choice of my sole companion.  The lads in the snug were all on lager too, though of what mix, I couldn't tell.

Then horror on horrors. A mobile phone rang in the bar and in hushed tones, after exchanging endearments with his/someone else's wife/girlfriend or whatever, the callee, said words to the effect of "I have to go. I'm in The Pleasant and mobiles aren't allowed."  Seems Humph has put the fear of God into his customers on that one. Less so on the effing and jeffing I'd suggest, but all of it was in the context of fitting bathrooms, exchanges about how the day had gone and so on, so to my mind at least, harmless enough.  One lad called through to me saying that he didn't care ("couldn't give a fuck") about Humph's rules. Sooner or later he'd shut the pub anyway, like he had the Yew Tree he observed.  "Aha" I thought. "I could have saved a journey here."

My pint was finished, so bidding goodbye to my sole companion in the lounge and shouting a farewell to the denizens of the snug, which was answered by all, I left in the (still) teeming rain.

Pleasant in the Pleasant? Certainly. I hope Humph doesn't shut it.

I must go on a Sunday and see what it is like. It would, like most pubs, be better full I'm sure, but I quite like the bare 70s look. Sorry about the photos which reflect the gloominess of the day.

No evidence of any Sam's bottles were seen. Just a fridge full of various Scintilla soft drinks.
Posted by Tandleman at 10:02

Wasn't the Yew Tree the pub that used to have a Brighton Belle carriage parked next to it?

That's the one Mudgie. I think it was removed due to asbestos.

This is getting a bit off-topic, but looking at Wikipedia it appears that enough of the carriages have been retrieved to make a working preserved train, which is surely a much better use for them.

There's apparently still one at the Little Mill at Rowarth near Marple, although I haven't been there for years.

Quite a new subscriber to your blog, really like it.

I'm amazed how these pubs are selling beer at such a cheap rate. Even when I started drinking in the late 90s, I've never had a pint that was less than what you paid in there, unless I had a voucher when at Uni.

Even at the student's union in Belfast. It's a bit of a problem here in Northern Ireland, restrictions on licenses mean that the pub often inflates the price of beer due to the fact they can, and no one can open competition to them.

How are they making a living?

Our mobile web app developers are experts in JavaScript, HTML5, CSS and a variety of web services. Web development services in Cheshire

China's One Child Policy was introduced in 1979 to limit the country's population growth. Although introduced as a temporary measure, the policy is still in place though relaxed in some areas. Officially, couples are limited to just one child. Second or subsequent pregnancies are met with fines, economic penalties and pressure to have the pregnancies aborted. Get China one child policy assignment help by our academic writers based in Australia.


Hivemind create static and dynamic content on the social platforms that talk to your audience and communities.
Digital marketing in Manchister

Hivemind create static and dynamic content on the social platforms that talk to your audience and communities. Digital Marketing in Manchester

From custom build projects to e-commerce and identity building we can produce the right tool for you. Web design in a Manchester