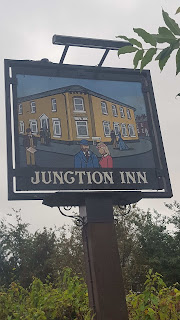 It is a peculiarity of Sam Smith pubs that they hide their ownership light under a bushel. Particularly appropriate as of course, as any ful kno, a bushel was, following the Norman Conquest, part of the legal measure of English wine, ale and grains. But I digress, though anyone seeking out The Junction could easily pass it by, as there is nothing to identify the building as a pub, with even the sign being obscured by trees and bushes. Hidden in plain sight you might say.

So what's it like? Well, a big, ordinary looking, off white building on the corner of a main road and, well, another main road. On a junction you might say.  The Junction sprang to fame a few years ago when Humphrey turned up on New Year's Eve at 8.30 p.m, sacked the licensee on the spot and summarily chucked the denizens therein out on the street. The Oldham Chronicle has a report of it all, as does the Daily Mirror. Worth a background read to learn of the somewhat chequered history of this otherwise ordinary pub. I seem to recall tales of a sit-in too, but memories fade. My take back in 2012 is here.

Putting this all behind me, I called in the other night at tea-time.  Enter on the right and you are in a rather plain, but welcoming public bar, with a J shaped bar counter, large windows making the place bright and airy. A dart board and oche against one wall and looking round, some fine pictures of Sam's bottled beers of yore. Rectangular small tables were occupied by half a dozen cheery locals - well cheery with each other - they totally ignored me.  A pot bellied dog of uncertain provenance completed this bucolic scene. Looking through to the other side a very cosy lounge looked attractive. I reckoned I'd turned the wrong way at the door, but time would tell.

The barmaid was friendly though and my ordered pint of Dark Mild (£1.34) was fetched from the lounge ("It's been poured more recently there" quoth she.)  Top lass. She also turned a fan by the bar off as it "might deafen me", but actually while I'd noticed it, it hadn't bothered me at all.  The locals were in reminiscing mode, talking of beers of yore, though each seemed, in the time honoured Sam's way, to be drinking lager mixes. ("Yes, Lees Stout was called Archer") I nearly chipped in, but didn't.

After a while, as my pint sank lower, (2.8% and delicious) the barmaid enquired of the codgers if they'd yet bought tickets for the meat raffle. "Classic" I thought as they all chorused that they had.  One or two drifted off and I thought that it might be good to try the lounge for another. I'm glad I did.  The lounge was splendid. Comfy nooks and crannies, bench seating throughout, bric a brac here and there and again, excellent beer posters.  One old lad, with three very doddery old ladies  - I noticed as he escorted them to the facilities - ordered them all halves of Alpine. He gave me a cheery hello. I wandered round. Two lads, again drinking lager, were chatting earnestly; a couple sat contentedly in an other cosy area and at the end of the bar, was a fellow drinking Dark Mild. "Aha" I thought. 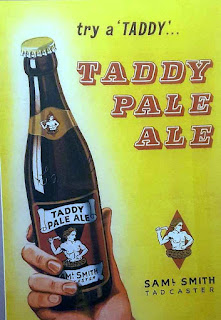 The barmaid engaged me in conversation of the "You're not from around here" variety, but in a pleasant way, I remarked about the lounge being an attractive area. "Yes", she agreed, "but it's a bugger to clean." Seems she manages, cleans and does everything else. Well, Humph likes his pound of flesh. We also chatted about Pure Brewed Lager which is sadly only in bottles now, the keg version having been a bit too fobby for stocks. Interesting stuff.

Checking the walls from my position at the bar, the usual notices prohibiting this and that were somehow less jarring in this attractive pub, which reminded me with a jolt of how pubs used to be back in the 70s and 80s.  As I stood, earwigging at the bar, I overheard a conversation with a local.  "The big boss is coming." Surely not Humph? But it was. He was expected at half six to pick up keys for another pub which was awaiting new managers. Blimey.  He arrived at about 6.40. I've met him once before and he hadn't changed much. Nice dark suit, dapper, alert and slim with a neat semi comb-over. He didn't look round particularly, merely said hello to the barmaid /manager, she gave him the keys and off he went.

The excitement was over. I finished my pint and reflected on seeing Humph again. Some people never see him at all. Ever. Two or three minutes at the most he was there. You might have blinked and missed him, but I didn't. As Max Boyce once said "I know - coz I was there."

I was telling the barmaid of E's liking for Pure Brewed. She said I should bring her and you know, I will.  It's a smashing little pub and even at £3 a bottle, a round with a pint of Dark Mild will be less than a fiver.

Picture of poster taken on the QT. Nice innit? And no. I didn't ask Mr Smith for a selfie, but he must have been pleased at the efficacy of his prohibition of swearing. I didn't hear a single profanity.

I like the idea of Sam Smiths and i can take bans on mobiles etc. but the old tales of punishing landlords for not short serving customers has put me right off....

As I've said on Twitter, that really is a lovely description of a pub as they used to be, when people just "went out for a drink". Very rare nowadays.

Spot on with “how pubs were in the 1970s”, or in my case my romanticised notion of how they were. I was in a Sam Smith's pub in Leeds a while back and remember thinking that it was exactly how the pubs looked in Michael Jackson's books. (A lot of Leeds pubs are like that, mind).

How are the prices so low?

After 20% VAT and excise, how can they cover overheads and other costs?

Across the globe, death penalty or capital punishment continues to remain a method of legal retribution. And across the globe there remain intense debate about if effectiveness and efficacy. Every time a criminal is handed a capital punishment verdict, irrespective of the country of occurrence, activists raise their voices for its dilution and replacement by more effective forms of retribution. Debate reign supreme about whether or not capital punishment systems have a place in modern, evolved societies. Avail the best assignment help on death penalty by academic writers based in Australia.