To Helensburgh and Back


Given that our summer holidays are put on the back burner - assuming they are even on the cooker - I decided some time ago to go and see my family and friends in Scotland.  Now my sister, who lives in my home town, Dumbarton, is immune system compromised, so I turned down her invitation to stay and instead, last week, with the lovely E, booked into the Travelodge in nearby Helensburgh. This is a town where a much younger me spent quite a lot of time, mostly on a Sunday night, drinking beer in the Cairndhu Hotel which we reckoned then had a better class of young ladies to (unsuccessfully for the most part) chase after. It was also not so popular with the Royal Navy lads from round the corner in Faslane, or indeed, then, the US Navy whose sailors swarmed over from Dunoon and helped make the town a tad lively.

Alas, the Cairndhu Hotel, while still standing, is no longer licensed premises - or indeed a hotel - and while Helensburgh is a delightful little town, options for staying overnight are somewhat limited.  The Travelodge is in the upper parts of what was the Commodore Hotel, the lower part being, now, the Commodore Inn, though you can actually enter both from either. The Commodore Inn has an excellent aspect on the Clyde River front and our room provided us with a basic, but comfortable enough abode. It is fair to say though, that it is in need of some updating.

Now how would Scotland's much stricter rules on the pandemic manifest themselves? Well, firstly, at check-in, the desk is sealed behind plastic. We were informed we'd have to make our own beds and bring towels for changing down  to reception. Not a big deal really. Face masks were compulsory inside the hotel and this was complied with by and large, though sometimes we and others forgot, as we went directly down the stairs to the outside without going elsewhere. 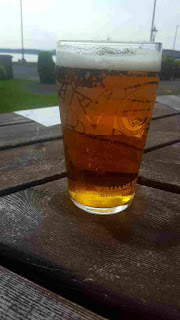 After a long drive, a pint was in order. We went through their extensive  beer garden to the Commodore Inn. At the door we were greeted and a note taken of our names and phone numbers. Hand sanitisers were everywhere. We were given a table outside in the no smoking area and drinks were brought to our table. It was quick, cheerful and easy. Refills were by flagging down a server. Tabs were offered, or you could pay as you went. Now of course, as details were being handed over, I scanned the bar. Cask offerings, perhaps oddly, were London Pride and Doom Bar. No Scottish cask beer was a disappointment, but hey ho. The Pride, served in a Williams Bros Glass, was at most a 2.5 in CAMRA NBSS parlance, but the second scraped into a 3. Just needed drinking I think.

That night we dined at the Sugar Boat, a lovely little restaurant on the main Colquhoun Square. Again we were accosted at the door and even though we'd booked, names were taken and we sat outside in the sunshine with others, all socially distant, as was the case inside.  So far so compliant.

The next day, we had breakfast at another old haunt, but from more recent years, the Henry Bell.  Would JDW let the side down? Not a bit of it. We were stopped at the door, forms were filled in, we were asked to sanitise our hands and the modus operandi inside explained. Clean cups for coffee refills, one socially distant queue for all service and tables were sanitised. We returned again that night to meet my pal and of course, it was much busier, but the same high standards were maintained. It remained so, until the Royal Navy arrived and things got a tad more boisterous, but the system did work, though the young sailors, finally let loose after a long submarine patrol, were perhaps a bit louder that you'd want, but who could blame them?

In Helensburgh itself, mask wearing in shops was compulsory and obeyed to the letter, as far as I could see, even in the large Co-op. Queues outside the butchers, fishmongers, greengrocers - it's that sort of town - distanced happily. 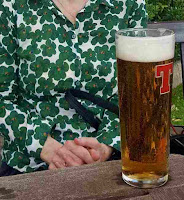 We didn't go to any more different pubs, but our remaining restaurant trip saw our names taken and hands sanitised.  On the way back, we waited in line to get into the supermarket where everyone was masked up.

Scotland is, it seems, in the small part of it I was in, at least complying. Compulsion obviously has an effect and it didn't seem to slow things up.

We did go to several small shops and for ice cream and again all was neat and orderly. It seemed a small price to pay for the added confidence it gave.  Helensburgh is lovely when it is sunny. In fact it was too hot at times. Never thought I'd say that.

In JDW, the Navy lads were stopped from moving the furniture about. A small number of staff did well. We also encountered many sailors wandering about looking for a late night drink. Good luck with that one, but my pal did tell me some pubs have not yet re-opened and the large John Logie Baird was closed and boarded.

The Commodore was an Innkeepers Lodge a decade ago, superior to the sparser Travelodge.

Couldn't be much more Spartan if it was moved to Sparta. Used to be a proper hotel. Touchingly the Dumbarton bus still leaves from outside. I remember the dash from the Cairndhu and the sheer joy of making the last bus.

A relaxing break that sounds rather like a trip to Porton Down. Good views, decent weather and unremarkable beer are not enough to overcome the obvious surfeit of human stupidity.

Is cask surviving well in Scotland? Duncan and Martin's reports suggest it is hit and miss...

Are you in financial crisis, looking for money to start your own business or to pay your bills?

GET YOUR BLANK ATM CREDIT CARD AT AFFORDABLE PRICE
*We sell this cards to all our customers and interested buyers worldwide,the card has a daily withdrawal limit of $5000 and up to $50,000 spending limit in stores and unlimited on POS.*