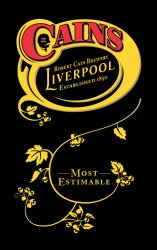 Talking of Liverpool, Robert Cain, the brewer that occupies the former brewery of my beloved Higsons, is in deep shit. Despite optimistic noises written elsewhere, it seems the problem has deepened and the money it owes Her Majesty's Revenue and Customs is not its sole problem. The Morning Advertiser has the full story.

It seems that it's recent activities have been in breach of the brewer's covenant with its own bankers, the Bank of Scotland. It is now the Bank that will decide its future it appears. This may not be as straightforward as it seems. The Bank of Scotland is part of HBoS who recently failed to raise £4 billion on a rights issue. In these harder times, they may take a dim view of current events. Let's hope not. Liverpool needs Cain's.

The Southport Drinker mentions it here in alarmed terms. He is dead right. Losing one brewery would be careless, but to lose two would be a tragedy. My fingers are crossed for them.
Posted by Tandleman at 12:34

This is very worrying news. The beer scene in Merseyside and beyond would be drastically impoverished without this local brewer, which has brought us wonderful beers such as FA, Raisin, Sundowner, 2008, and Triple Hop, to name just a few. FA in particular is one of my favourite 5% beers.

As you say, fingers crossed.

Frankly I'm not surprised about this. The reverse takeover of Honeycomb was regarded as bonkers by several brewing industry people I spoke to. Many of the pubs were on lease so the company had little in the way of tangible assets and was on its uppers. The Honeycome pubs had received little or no investment for years and many were keg or lager driven hell holes - just the type to suffer from the smoking ban and credit crunch.

I have to say that despite the propaganda emanating from Liverpool, I never thought Cains beers, well most of them, are up to much either.

It will be a shame to lose them if that's what happens, but you can't help feeling that they will have been the architects of their own downfall.

Reading between the lines of that article by in the Liverpool local newspaper, it seems they fall in value of their new pub estate has led to them breaching the LTV (loan to value) covenant in their loan agreement with BoS. That's pretty grisly, but on the other hand it won't be in the bank's interest to pull the plug if the company (a) has other creditors with priority over them (i.e. HMRC) (b) what they have security over (the pub estate) has fallen so dramatically in value.

John - I agree with much of what you say, but of course all this was in the business plan they put to BoS in the first place. They must have seen merit in it. As for their beers, well not exciting as such, but competent and in the case of the mild, superb.

Stonch - I agree with you too. It wouldn't serve the bank too well if there was a fire sale at present. If as Cains say they don't want any more money, all might be well, but it could go either way.

Re: "the propaganda emanating from Liverpool".

I agree that there are people on Merseyside who have overhyped Cains, and have turned a blind eye when it suits them. To give a recent example, Cains took out the cask mild from the Globe in Cases Street (a legendary pub locally) and replaced it with smoothflow, even though the licensee said they were turning over enough to keep the cask. Liverpool CAMRA did not take up the cudgels on that; to me it looks as though there is a policy to go softly on Cains.

So the "propaganda" comment is not without some justification. However, the views I expressed above on Cains beers are genuine: I really do like most of them.

Ive always thought the people in charge of Cains were asset strippers .Ikeep hearing how well they are doing but they never show a profit .Anyone can can get a big share of the real ale market if you dont make a profit .

Asset strippers don't usually borrow huge sums of money to expend. They sell the best bits of what they have bought cheaply and then close it all down.

I think you are wrong in that aspect though whether their business is any good - we will have to see.

Nothing I've heard about the Dusanj bros has made me think they're asset-strippers - they've both moved their families to Liverpool & work very long hours trying to make a go of the business.

Rednev - I didn't know The (wonderful) Globe was a Cain's pub? It is however somewhere I've drunk some sublimely good cask Cain's Mild - such a shame if it's gone - seems v odd if the landlady wants it & keeps it well!?

It's not like Liverpool CAMRA to keep quiet if something's up though.

It will be a very sad turn of events if this comes to pass.

I think I shall be directing my bottled beer purchases to Cains for a while as a small gesture.