The House of Mitchell 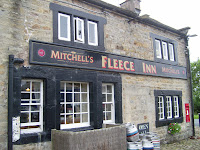 y firm supplied beer from its own brewery in the centre of Lancaster. I supped some of the last pints from the final brew and jolly good stuff it was too, though alas unappreciated in its own homeland where years of poor quality control had diminished its reputation beyond salvation. It is credited by some with coining the term Extra Special Bitter (ESB.) 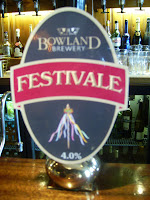 the company, still a family owned business, runs a number of hotels and around 55 pubs in the Lancaster area, one of which is the GBG listed Fleece at Dolphinholme. This, like a lot of pubs in this area, is a former farmhouse, though you'd be hard pushed to recognise it as such now. Mitchell's pubs, previously criticised for their pedestrian ale range since the demise of the brewery, seem to be more ambitious now. In this case we plumped for Festivale from the Bowland Brewery. Having just supped the excellent Ice Maiden we were not expecting to be as impressed as we were. This outstanding beer at least equalled it and quite probably pipped it into second place. It is one to look out for if you like your beers pale and hoppy.

Alas this tale has no happy ending. As second pints were ordered and eagerly anticipated, the pump spluttered and the amber nectar ceased to flow. All good things come to an end. In this case all too soon!
Posted by Tandleman at 12:10