I am in London, briefly. I came down for a social meeting with Eileen's colleagues and a trip to see "As You Like It" at the Globe Theatre. Despite reservations, I thoroughly enjoyed that, aided and abetted by the fact it was a lovely night, which helps in an open air theatre. Being at the front in the top gallery, some of the best seats, helped too.

At the interval which was short - they ought to get Shakespeare to sort that out - he certainly knows how to drag things out - I noticed with horror that the only beer on sale is canned Fosters. WTF? I stuck to water.

We walked home through Southwark and popped into a quiet Rake. Quiet in number terms, though not in noise, provided by a very drunk young American, whose political views would have earned him a smack in the mouth in some places I know, and to be fair, a round of applause in others. I watched the two women behind the bar. They served me civilly, but with no customer interaction other than telling me the price. They seemed a little cheerier a few minutes later at 10.40, when, without any call of "Time", the fridge lights were turned off, the lights on the fo 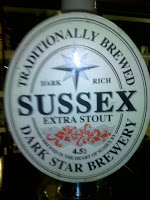 nts the same and they emerged for a sit down. Now I have never found the Rake staff anything other than just indifferent. Not good, not bad, just apathetic, though others have written about worse experiences. With the beer range (and prices) they have, wouldn't it be nice if they were full of enthusiasm and cheer? It'd make the experience a lot better for both sides of the bar.

So what did I have? Dark Star Sussex Extra Stout which was decent, with roast malt dominating, though there was little by way of hop bitterness. Needs some work I'd say. It was in average condition. Like the service, not good, not bad.

An interesting pumpclip.
Posted by Tandleman at 09:36

I remember being irritated by identical treatment (bar closed early without warning by uninterested staff) in the Vernon in Liverpool years ago when drinking with you and Graham. I'm glad to say it's not like that now, but you don't forget these things.

With a recession on, pubs can't afford to treat customers in such an off-hand manner, as there's no shortage of alternatives, or perhaps the recession hasn't affected the capital as much as it has the rest of us.

Seconded your comments on The Rake.
I often stay with a pal of mine who lives round the corner and it always amazes me how a bar with such a wide variety of beer can have staff so plainly disinterested in the stuff they're selling.
Which is why we mostly drink in the Market Porter.Friendly staff justifiably proud of and knowledgeable about the variety of beer they sell.

What were the political views of the young American? Was he slagging off Obama claiming we're heading to a health care system to rival your NHS?

Prof Pie-Tin - do you mean disinterested, or uninterested?

Sausage - Mostly Iraq and Afghanistan. I just tuned out his content, but couldn't tune out his voice.

Dom. I'd guess since he agreed with me he meant "uninterested".

But they were also disinterested within the strict meaning of the word. "not having a personal interest at stake". Couldn't care less even.

Dominic.
Disinterested and uninterested are two words with a similar and often overlapping history.
Maybe I should just have said they couldn't give a fuck !

Am I the only one who saw the title of this topic and thought it was going to be autobiographical:)

I've experienced simlar at The Rake, sadly. I've heard tale of people who have experienced out-and-out hostility from the staff as well, for such transgressions as not shutting the door to the terrace properly ("Shut the f*cking door properly, will you!). And yes, shutting up unexpectedly early seems common. I also found it shut completely on a bank holiday monday, when all the surrounding pubs/bars were packed.

A great shame, as the beer selection is so good. I wonder if the owners are aware of these issues?

Disinterested and uniterested were discussed at some length on Radio 4's 'Fry's English Delight' last week. Apparently, disinterested is about to become the new uniterested.

Most of you have a pair of balls, use them. From what's been mentioned, I'd go off on the assholes. Then, I'd send them a tune outlining my disgust.

I love that Sussex stout - had it in the Dark Star in Brighton where it was very impressive. And I love the pump clip.

Never been in the Rake, although I've walked past it on several occasions, It always seems full to bursting point, so I usually end up in the Market Porter, which I can't fault.

"A great shame, as the beer selection is so good. I wonder if the owners are aware of these issues?"

Doesn't reflect well on them either way I'd say.

what a shame - i've never been to The Rake, but just spent a lovely weekend drinking in the capital - see the blog for the roundup. People just don't get it - Staff make the difference.

Your visit reflects my experience on several occasions - I want to like the Rake but it annoys me on several levels - the service and the bottled beer are both far too chilly for my liking.

I use the Rake fairly frequently and find most of the current staff to be knowledgable, friendly and keen to discuss the beers on offer. It is a shame that you experienced a rare 'off' night.

I experienced nothing other than - well - nothing. Others seem to have had worse Bob. Who am I to believe?

I've drunk about once a week in the Rake usually early in the week due to the area's popularity Thurs/Fri for the past 3 years. Majority of the staff have been at the least pleasant. Last night (Wed) I was asked if I wanted a particular beer (Brewdog - Paradox Port Dundas) from the cellar, and same barman volunteered the information that possibly the Liefmans - Cuvee Brut (on tap) might be a rebranding of Liefmans - Kriek so that was 2 good pieces of customer service in one visit. I've also read some of the negative comments on B.I.T.E but have not experienced anything negative myself. My only current complaint is that they no longer have bottled Spezial - Rauchbier though they've had Schlenkerla on tap.

Hello Tandleman. My name is Tom Cadden i'm Deputy Manger in The Rake ad stand in to comment here as my manger is on holiday. I can only appoligise for your bad experiance and can assure you that we do aim to ensure customers have the best experiance they can in the pub. The situation is being delt with and thank you for bringing this to our attention. I also hope this wont put you off coming again and would welcome you to come back! Once again i do appauligise and look to get this situation sorted.

Tom - Thank you very much for taking the trouble to reply here. My experience wasn't particularly bad, though others feel differently about theirs from time to time it seems.

It won't put me off and with you on the case, I look forward to smiling and cheerful bar service next time I'm in. It does make a difference to the experience. Thanks again.

Is it just me, or do I sense a great deal of love lately in the beer world?

I hope his lecture to the staff is better than his spelling.