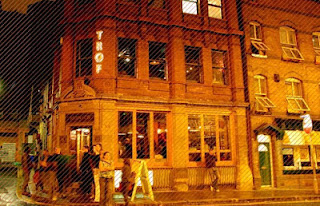 Trof is one of those trendy new bars that Manchester and surrounds do so well and others seem to do so badly. It is in a lovely old building, just along from Shudehill Interchange, thus handy for me and my nemesis, the 17 bus. Downstairs it has a nice bar with the usual sofa-ish mix of furniture and big windows.  Troff sells some good stuff, some mainstream and thankfully, cask beer - like most such bars in Manchester - though it isn't right up there on the beer front, being more a solid, dependable venue which attracts a good crowd. I've been there with Tyson and had some excellent beer and been there when we have had to retreat as nothing appealed.

Upstairs in the eaves is another bar. A bit more pubby perhaps, but still trendy enough for those that need trendiness. If I was 30 odd years younger, I might call it cool, but I'm not, so I'll just content myself with "nice".  I was there to see one of the stars of the brewing firmament, Garrett Oliver and a small but anticipatory crowd found seats and awaited the great man's arrival.  Now, I have met Garrett a couple of times before and he is the most charming and articulate of exponents of the glories of beer.  He is enthusiastic but doesn't gush as some do and has a very clear speaking voice. That was handy for us all of course, especially as drinks loosened standard British reserve.  Still no whooping and high fives here though.  In fact Garrett remarked that it was all rather quiet, but that didn't last.

Courtesy of James Clay the importer, some rather exotic beers were on offer. I think it fair to say, a mix of the commercial and the experimental. Garrett emphasised the uniqueness of some of the brews and their very limited availability. Some in fact having been specially bottled for Garrett's UK visit.  After a preamble with Garrett describing his early career, it was straight into the beers. Now I won't describe them here, as Ghost Drinker has done a far better job of describing them than I would, not having taken any notes.  We did have them in a slightly different order though, with Brooklyn Lager kicking us off and a very nice drop it was too.  Garrett's description of the more experimental beers is best read in Ghostie's blog, but I thought The Companion, a wheat wine, more interesting than enjoyable. To me the flavours all clashed somewhat, but hey ho.  Next we had Mary's Maple Porter, a 6.9% beer made with maple syrup from the Brooklyn Brewery Quality Control Manager's own maple trees and apparently the most expensive ingredient ever used in the brewery.  It was luscious and enjoyable, but to this writer at least, the maple didn't come through as strongly in the finish as predicted, which was a pity.

All through the tasting, neat morsels of delicious food appeared, such as ribs, mini hamburgers, spicy chicken etc. All were excellent accompaniments to the beers.  As the beers started to cause people to lose their shyness, questions began to flow and the event became much more interactive and relaxed.  We then sampled another experimental beer, Cuvee de la Crochet Rouge Rose. If you like complex gueze like Belgians, which I do, it was a wonderful complex beer. Ghostie's description is spot on, so check that out.  Black Chocolate Stout needs no introduction and it lived up to its promise, with a complex array of roasty flavours and evident alcohol.  Lastly we had one I'd been looking forward to.  BLAST is a 9.0% beer described as a "Big IPA".  It lived up to its billing and was big on C hops (though) English hops were used too. A great beer to finish on and one I wished I'd been able to get another glass of.

I asked Garrett three questions: the first was about his views on the use of so much crystal malt in US beers. He reckoned it was mainly a West Coast thing and thought perhaps it was because American Craft Brewing is so heavily influenced by formative years of home brewing. He agreed with my proposition that you can't overcome over use of hops, by adding crystal sweetness.  My second question was about how he thought his beers might be if slightly reduced in alcoholic strength, particularly the Black Chocolate Stout.  His answer was basically that he felt that alcohol adds a layer of complexity and further added that BCS is a beer that develops as it matures. The one we were drinking was fairly young and the alcohol much more up front. Older ones are softer and smoother. So perhaps a tip for those keeping some back in their cellar? 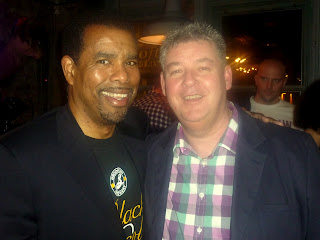 My last question was about clarity in beer.  Garrett was of the view that it was horses for courses. Some beers are better pin bright and that overall there was some doubt as to which route was best.  He was a little scathing about some American attempts at cask beer and thought that cloudiness or haziness in a beer was a difficult one to get right, as it goes much wider than flavour itself - and that is difficult enough. One other question, put by another guest was around how many hops is too much. Garrett used the analogy of a chef that over salts his food to the point of inedibleness and then when confronted, shakes his head sadly and says to the diner "You just don't get salt do you?"  Much laughter to that one.

I had a quick chat to Garrett afterwards and we talked about JW Lees (where I'd met him before) and about the people there. Then a  photo with the great man (as a lot of people did).  All in all it was a delightful night and you have to say, Garrett is erudite, knowledgeable, likeable and oh so approachable.

A real nice guy in fact.

My thanks to James Clay for the invitation to a grand night out and to Ghostie for saving me on descriptions. For those wondering, Garrett is on the left in the photo
Posted by Tandleman at 13:43

You even put on a clean shirt. An honour indeed.

It's only a few weeks since he was at PSBH - what's he up to over here?

I tend to like hoppy dry beers, but you can have too many hops in the mix. That salt analogy is excellent, and a neat riposte to those who stupidly allege that disliking too many hops is a fault in the drinker, not the beer. It's all a matter of preference, not fact.

Well, seeing as you're getting so friendly in the photo, I thought you'd know for definite!

It's nice to be nice.

Many thanks for the mentions Tanders, I think it's fair to say that it sounds like you had an excellent time just as we did. He mentioned his trips to Lees at our do too. I could of gone on for a lot longer about the beers, but I felt I was beginning to waffle, one co-worker thought I wrote about the food much more than the beer, oh well...

I hope I'll get the chance to meet him again, like you say, he's the nicest of chaps.

I agree; Garrett gave a thoroughly enjoyable and informative talk - his encyclopedic knowledge of brewing (and vinification) together with his sense of humour were captivating.
Not bad company too!

He speaks clearly? Not with a proper Brooklyn accent? Pisser.

In what way exactly was he scathing about some Yankee cask beer? They don't get it bright enough? It's not really cask conditioned?

They just don't get it right essentially.

I know who he looks like there, The Grinch Who Stole Christmas.

"Garrett used the analogy of a chef that over salts his food to the point of inedibleness and then when confronted, shakes his head sadly and says to the diner "You just don't get salt do you?" Much laughter to that one."

Perfect. I plan to steal this line.

I suspect you may be confusing Trof with Odd. It's many years since we visited Trof and it's never had cask. However, we do on occasion favour Odd with our presence.

I disagree with the over-salted bit. Okay, depending on beer style, you can over-hop a beer, of course. But when you want something hoppy, you need the brewer to not be afraid to use an assload.

I have seriously never had an IPA or half-IPA that's been too explicitly hoppy, for example, either in the UK or the US. I would like to encounter overhopped helles Lager or Kellerbier down here, but.....

Tyson: That's Odd. I might be though. They are rather similar inside.

Nick: You don't get salt do you?