I did my bit of culture yesterday by visiting the RAF Museum at Hendon. A must for a buff like me, though I have been before. Later I had intended that we follow a pub crawl around the St Paul's area and accordingly I met E in the Bell,down the side of Cannon St station. It is a spartan little boozer, still tricked out as a Courage pub and quite likeable. After work it was full, though I found a seat beside two businessmen and eavesdropped on a long tedious discussion about conservatories. Such is pub life. Harvey's Bitter was my choice, though frankly it did little for me. The choice (all brown) did less for E, who declined a drink. 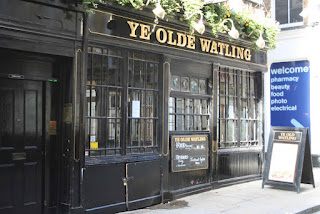 So off we went to the Nicolsons run Old Watling. This is a good pub and offered two light beers, though the Roosters True Grit went off as I ordered it. Our second choice of Jaipur was, well, just like Jaipur is these days. Below ordinary, but fortunately a new Roosters came on and was decent enough.  Next up was the Cockpit and another pub that I liked. Absolutely crowded, but we found a corner to stand in the bottom of the pub. Beside us, a young couple sat on bench seats, spread out so that a space that would have fitted four or five, was theirs alone. Her coat and handbag took up two spaces and he took up the rest. I sipped my Adnams and observed. She read the Evening Standard, he was texting like mad. They didn't speak and their glasses were empty. After a while the girl glanced up and looked at us. She asked if we'd like to squeeze in. He didn't make any move or even look at us, so we declined. About 20 minutes later they left.

Our next and final stop was Shaw's Bookshop. Our friends from the Cockpit were there at a table. Amazingly she said "Hello". I joked back that I hoped they were buying a drink this time. They grinned sheepishly.

A pub is a shared space. Knowing  and observing pub etiquette is important to make the system work properly and for the benefit of all.

Thanks to Perryluke for the crawl. Two pubs I'll be back to are the Cockpit and the Old Watling.
Posted by Tandleman at 10:40

Good post. I was recently in the Oast House in Mncr with friends and a couple were taking up a whole bench with baby cot and various paraphanellia. They seemed genuinely surprised that anyone else would want to sit down. Give me the Germans every time.

Yes, taking up as much space as possible with the minimum of people is an art form.

British people (but especially Londoners?) do tend to expect a table to themselves. Not sure why. Always seems to work out perfectly well if we ask to 'slip into those empty seats', or offer people the spare end of our table. Ah, well... sure we'll get there eventually.

(Mind you, Boak tends to be particularly militant about seat-blocking: she will make a point of sitting next to anyone on the train who has put their bag on the empty seat next to them and pretended to fall asleep.)

The Bell is a great, well-run little boozer. (http://www.beerandlifematching.com/2011/06/harveys-sussex-best-bitter-and-bell.html)

Ye Olde Watling is a pretty decent place to drink too.

I work just off Cannon St so know them well.

There are loads of amazing pubs in the City with bags of character; it's just a shame about the characters that tend to frequent them...

John Conen sums things up nicely in his excellent guide to "Bamberg and Franconia". Describing a typical Franconian Gaststaette he advises readers, "Tables tend to be large and drinkers are expected to move up and allow newcomers to share the table. There's none of the hogging of space and seating that you encounter in Britain, and leaving coats and bags on seats is also frowned upon. Use the pegs provided!"

Were this were so here in dear old Bilghty!

The growing trend to have individual tables and loose seating encourages the "this is my/our table" mentality.

In pubs where there are wall benches, people tend to be more sociable and may move up to make more space.

Yes, the Germans are sociable with tables in all sorts of places, which we expat Yanks got used to pretty quickly. I've honestly not noticed table hogging in England, maybe it looks normal to me as a Yank.

Franconians are --perhaps ironically having been mentioned in that guide-- notoriously *less* social than other sorts of Germans, specifically w.r.t. the table sharing issue. There's a saying along the lines of:

"What do you see in a Franconian tavern with 5 patrons and 5 tables?"

"What would you see in the same tavern located elsewhere?"

"4 empty tables." Or summat like that. They're quite cold and reserved compared to their neighbors. At least up front.

I have read though, that pub etiquette means sitting at a table away from the bar, one should expect more privacy than nearer the bar or of course, standing at the bar. Excellent book, BTW: Watching the English. (Thanks again to E for that.)

And now a question. I've come to learn what a "snug" and a "vault" are, more or less, but what or where is the "bottom" of a pub?

Nothing new to learn here Nick. This was specific to the Cockpit. It has a raised area and a lower area. Maybe that was the cockfighting area?

Yes, what is it with Jaipur these days, it's a shadow of what it was a year back. Thin with a top note suggesting too much sugar, that lovely tart bitterness that underlay the hop thwack is entirely missing these days.

However, it's the condition that's the worst aspect. No longer crisp, it's a soft soapy concoction that flops into the glass and lays there apathetically. I've regretted each one I've bought in the last few months and will probably avoid it in future

It is more common to share tables in Europe as there is less chance of nutters engaging you in conversation.

I don't get to proper pubs that much but when I last did I treated myself to a pint of overpriced obscure cask pong with a name I hadn't heard of. These bearded people joined me and started talking about hop varieties and craft keg. No mention of the football or whether the barmaid is a goer or not. Even saying "couldn't give a shit pal, I'm off to neck some cheap cans of lager, tarrah" didn't scare 'em off.

When I have next saved up enough for a pub pint I shall take a table sign with me saying "No beards, beer geeks or CAMRA types, thank you" or I shall take up more space.

"(Mind you, Boak tends to be particularly militant about seat-blocking: she will make a point of sitting next to anyone on the train who has put their bag on the empty seat next to them and pretended to fall asleep.)"

Hah, me too. A loud "Excuse Me" and a good stare does the job. Really worth it to see the grunt of disapproval and reluctant moving of a bag.

Mind, I'm usually the last person on a tube that people sit next to - friends have said it is because I look like a tramp. Very harsh.