But How Much is a Pint in the Pub?


The British Beer and Pub Association has published a timely little table about beer tax, which we all agree is too high in the UK. It topically shows the price per pint of beer tax in the countries competing in the European Championship and of course shows England at the top. There are the usual quotes about how the amount of beer tax is crippling pubs and the obviously appalling fact that although we drink 13% of the European Union's beer, we pay 40% of the total tax on beer.

Now the logical among us know that the Chancellor knows this too. He clearly reckons he can get away with it, which makes signing the petition about beer tax all the more important, but given that, quite possibly futile. He'll say the money has to come from somewhere I'd imagine. Returning to the table, there is some interesting stuff. It reads like this: 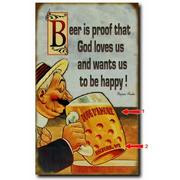 All the more remarkable is the fact that it is likely, nay certain, that the table would look quite different if it showed the average price per pint in the on trade - the pub - in each of the countries featured. I rather suspect that we'd come out of this a whole lot better, as anyone who has been daft enough to buy draught beer in France would agree. In terms of pub pricing, duty clearly isn't the only factor in play.*

We do we need to redress the balance between on and off trade, but it seems on the face of it that on average, we aren't getting such a very bad deal in pubs compared with our EU cousins.  Clearly it could and should be better if duty had only risen in line with inflation. So we need a duty cut, or at least a duty freeze.

So sign the petition anyway and let's air this debate where it counts. In Parliament.


* You could use this site  to work out pint prices, but since no guidance is given as to how you should convert measures before submission, it is likely to be wildly inaccurate.
Posted by Tandleman at 08:55

I am never really sure of the validity of such tables given the disparity in the cost of beer from one country to the next.

Let's take the Czech Republic though, an average half litre of lager will set you back about 25 CZK, which equates to roughly 75p, making beer tax the equivalent of approximately 10.5%.

Even if the tax rate was levelled to the Czech standard, the average pint, assuming 3 quid to be average, would put about 29p into the coffers of HMRC, keeping the UK comfortably in the top 5 of that table. At 55p you are talking about 18.3% on an average price of a pint.

Surely a more useful Beer Tax league table would be on the basis of a percentage?

I don't suppose tax matters that much provided what you pay is reasonable and affordable and that absolute tax doesn't give the whole picture.

I think it is the nature of business that were tax to go down it wouldn't benefit the consumer directly as the price of a pint would likely stay the same.

The 24p per pint would go into the pockets of the brewers and publicans, which is of course a good thing so that more pubs and brewers can increase their profit margins and remain viable concerns.

If you wish to address the tax imbalance between on and off trade then VAT is more an issue than duty. Duty paid is the same for on & off trade booze. VAT is a factor of price.

A minimum price hands money to private companies, the most effective and legal method in the EU to have a floor price is to raise duty to the floor price.

UK beer tax may be higher than other EU states, but the UK is an autonomous state with a range of differences in both tax and state spend. I like the idea of paying less beer tax, just like council tax, income tax, fuel tax & VAT. I'd like my dear old Mum to find the hospitals open too. In the great scheme of things beer tax is way down the list of things that annoy me.

Compared with most of these countries, the UK has a higher proportion of beer consumed in the on-trade and a smaller differential between on- and off-trade. Also, with a few exceptions, they don't have the cultural tradition of session drinking that we have – beer in the on-trade is more likely to be just one or two consumed with a meal. I'm not sure that proves anything, though, except that we're not really comparing like with like. I suppose all it really does is to undermine the oft-heard claim of the anti-drink lobby that "alcohol" is dirt-cheap in the UK.

You make a really good point. Having recently spent a few days in Berlin, the situation in Germany is interesting. Beer in bars (I mainly frequented brewpubs) was around €3.60 to €4 per half-litre (at around 4.8-5.5% abv). A visit to the KaDeWe department store (Berlin's equivalent to Harrods) enabled me to buy some bottles of decent stuff for a friend at 89cents per half litre. You clearly can't say that tax is responsible for high pub prices in Berlin. There are more complex reasons I would guess, but the bars were not quiet by any means, with both locals and tourists.