Sitting Up and Taking Notice


Did anyone see a particularly excellent piece in CAMRA's What's Brewing this month? In case you didn't, it was about how some of Britain's oldest brewers, Family Brewers, are starting to look wider than the house bitter their great granddads brewed, by installing flexible in house micro breweries. 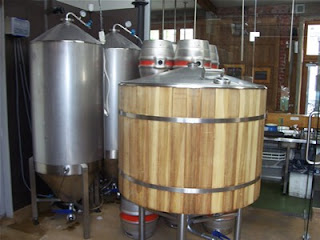 It is fashionable to imagine that the Family Brewers live in an ivory tower and are completely unaware of the changes around them in the beer world. I rather doubt that they are and talking to the ones I have talked to, they are usually pretty smart cookies.  Those that couldn't be bothered, or just wanted the money have, in the main, cut and run already. The rest are in it for the long haul and of course, most have already hauled their companies a long way since their Victorian or earlier foundation. They've seen a lot. But there is a feeling that the world is moving a tad faster these days and that just doing the same won't cut it any more. Those 100 barrel (or more) brewlengths are millstones round the neck of innovation and just doing something different. When you have to get a seasonal beer right first time, there is a tendency just to tweak what you already have and boy, do the customers notice that. The answer to many is a micro brewery within their own existing breweries. This allows the experimentation and small runs of speciality beers that give a point of difference and overcome an almost inbred reluctance to sell any beers but their own. They allow bespoke beers that are genuinely different and give the brewers something to play with. Brewers need something to play with I've found.

So we have Thwaites, Brains, Wadworth, Shepherd Neame, Badger, St Austell, Elgoods and not quite in the Family Brewer's category, Sharps. It is very telling to listen to the reasons given for these "pilot plants". I like these two best: First from Alan Pateman of Elgoods: "It has nothing to do with what the craft brewers are doing. But, as more of our beers are sold into the free trade, we need to be able offer a greater variety of beers. Brewing has become fun again."  And from the ever practical Stuart Howe: “Pilot plants are indispensable ......it allows you to explore your wilder side without the risk of making 30 tonnes of pig food.”

Now whether you think it really is taking on the micros, or avoiding feeding the pigs, this is a good thing, provided they use this flexibility to be bold and different.  Brewers need room to experiment and a 10 (or less) barrel brewery allows just that. I have a self interest of course. Manchester still has four family brewers and lots of their pubs.

Of course I've been beating the pilot plant drum at Lees too.  Fingers crossed on that one.

There are plenty other good arguments for pilot plants, but hopefully you get my drift.
Posted by Tandleman at 18:48

Flexibility is key here, it's a sensible way to experiment and expand. But it must be driven by some kind of demand helped along by craft beer? No?!

It's obviously a great idea. I knew about Thwaites' in-house micro-brewery, but didn't realise how many other brewers were doing the same thing. Thwaites will be moving to a new site in Blackburn soon and they've made it clear that the micro will be part of the new brewery.

Mark. I think helped along by micro brewers. Is that the same thing?

Harvey's have a pilot plant too.

Craft beer, yes that must be the source of everything good.

What the fuck does craft beer even mean in Britain? Is Harveys craft? It certainly isn't fucking macro.

Hyde's isn't going to be encumbered by those 100-barrel brew-lengths for much longer!

Come to think of it, a round-up of the prospects for the four Manchester-area breweries would be an interesting read. I suspect some will be much more willing than others to embrace ideas of flexibility and innovation.

Tennent's is smaller than Sierra Nevada.

Excellent informative blog - I never knew some of these breweries were re-discovering their wild wide.
But then again I'm just a beer oik.
I doubt it really matters what craft ale is in Britain - provided more and different varieties are produced all the time.
Where I live in the south of Southern Ireland new beers come along almost as often as Ireland appear in a major football championship.
Fortunately they tend to stay around a little longer.

PTP - Thanks. John and Ron. Bugger all indeed. It means what people want it to mean at their own convenience.

"But to beer drinkers under 35 in, eg the Rake or the Marble Arch, I'd suggest "craft beer" DOES mean something, and it'll be what they see themselves setting out to find and drink."

So craft beer is an under 35 thing? I think that has legs.

I think fwiw that craft beer to these drinkers means fancy keg.

I can't agree with Clarky. Craft beer does not mean bugger all, it just means different things to different people.

In this context it appears to mean on site micro brewery producing short run distinctive beers.

In other contexts it means hand crafted by artisinal souls rejecting a corporate view, rejecting crude commercialism and embracing a nirvana of overly bitter high ABV enlightment because that makes you a better person.

To the likes of me, the emperor has no clothes but so long as the grog is neckable and I can get rat arsed without taking out a second mortgage, viva la difference.

"excellent piece"? Not really. Asking a few micro-brewers what they thought about the trend would have helped a little.

It isn't all about you guys you know.

The pilot plant at St Austell really is tiny. When we last saw it, there were two younger brewers playing on it (nice to see). Roger Ryman seems to use it mostly to service beer festivals, provide one-offs for particular pubs and get wackier ideas out of his system (e.g. raspberry porter, which was very nice, by the way).

We've got a suspicion that the next trend will be a step further: small breweries operating within big breweries almost as separate sub-brands, with their own packaging, etc.. They'll have access to the bottling lines, warehousing, distribution, advice from the head brewer, and so on, but otherwise operate independently. (Ish.)

Kind of the reverse of what's happened with Marston's, Jennings, Ringwood, et al.

(PS. you didn't want to talk about the meaning of craft beer in these comments, did you? If everyone's bored with it, why don't they ignore it?)

Boak and Bailey: No I didn't, but it is an itch some want to scratch.

Anon: Man up and put a name to yourself.

I'm not suggesting it's all about us guys. I think t'would have been better "journalism" (define?) is all. If someone's writing a piece that quotes large businesses saying (repeatedly) this isn't about using our access to capital, market, and cross-subsidy to hammer the little guy (I paraphrase), then some balancing opinions might have been appropriate. You know?

Tandleman 'an itch some want to scratch'...they must be pretty scabby by now then....

I must apologise for saying the c'c word. As Peter says , I meant microbreweries. I don't even dare ask myself what 'the other' phrase means.

"Craft beer means bugger all in Britain": I assumed John Clarke meant that there is no generally accepted definition of craft beer in Britain, not that the phrase was utterly devoid of meaning. But a term whose meaning changes depending upon the eye of the beholder isn't much use.

The ancient sages say "craft beer is in the eye of the beholder",

@Tyson, ancient Chinese proverb say " man who goes to bed with sex problem on brain wakes up with solution in hand. "
Ah,so.

Reading this makes me feel a bit sorry for old Tandleman.
He strays into foreign territory of craft - nay,even keg beer - on a positive note and gets a crap-load of abuse from the Oregon brewery-wannabes by way of thanks.
You can't win,old cock.
Wahaay !

Nev - precisely. I think the best definition I have had was something along the lines of it being undefinable except in the context in which it is used (and, I would add, arguably in the context of the person using it). It means about as much as "traditional" and we all know how used and abused that word has been over the years.

I think most people who use the term "craft beer" just mean any strongly flavoured, unusual or interesting beer that doesn't fit into the real ale category. So its almost certainly keg beer.

It probably is more of an U35s thing, yes, because anyone over 35 generally either a) already likes real ale and isn't about to change his mind, or b) isn't really interested in beer at all.

U35s tend to be a bit more ambivalent about the whole cask/keg debate and want to drink something with a bit more flavour than the lager they drank as a student, but aren't quite ready to make the leap onto "pongy ale" quite yet.