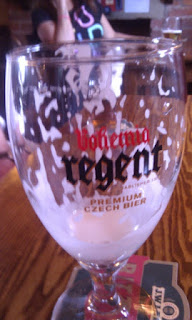 Have I mentioned this before? I can't remember, but JW Lees have available to all their pubs and the free trade, rather a good, genuine Czech lager.  The beer is Bohemia Regent Premium, a golden full bodied genuine 5% Czech beer falling into the class of světlý ležák 12. It is now imported directly by JW Lees to the UK.  Having been brewed in the Czech Republic, it is regularly tankered over to Lees to be kegged.  The Regent brewery has been brewing beers since 1379, in the ancient heart of the town of Trebon, in the Czech Republic and there is a rather interesting potted history of the place on their website.

Unfortunately, class counts for little when branding is all. In most JW Lees pubs in our area, the preferred premium tipple is Northampton brewed San Miguel - not even the same strength as that brewed in Spain (5.4%), but a 5% variation of the same. The name however sells it, though I doubt many know it is made in Northampton, nor care if they do.  Fortunately one pub, the Ship Inn, a handsome little pub on the Rochdale Canal and the nearest other Lees pub to my local, does sell Regent and in the proper glassware too. I often make a little detour there to sample the wares. We did so again on Sunday and three pints of this hoppy and bitter, delicious and well balanced brew were just the ticket. It is a firm favourite of my lass too, which makes it a lot easier for her to be persuaded into the Ship.

I don't know what sort of reputation the Regent Brewery enjoys in the Czech Republic, but for me, having a genuine, tasty Czech import on my doorstep, sold at reasonable prices, is good enough. It is though I believe available from Lees nationwide.

Sounds great - along the lines of Bernard Pils I see in York fairly often. If I see a Bohemia Regent font (I'm assuming it will be large and ceramic), I'll give the beer a try...

Funnily enough, it isn't. It is tall, chrome and thin.

You made mention of it in 2010 when it was replaced in the Tandle Hill by San Miguel but probably no one was paying attention back then.

Regent doesn't enjoy much of a reputation here in CZ, at least not out its region. IMO, the main cause is that the bottles you can find at some supermarkets are usually in a rather sorry shape (which ultimately, it's brewery's fault). In good condition, I really like Regent beers, specially the dark one.

I was lucky enough to have a tour of Lees brewery the other week - in a Co. capacity and tried the Bohemia Regent and thought it was rather good, also their own brewed Golden Original Lager at 4.0% ABV I thought also was not bad at all.

I am envious. The only draught Czech lager we see down here, (apart from Budvar in a few outlets), is Staropramen!

I've had this in the Czech Republic and it was alright, but why the hell don't Lees cask it? They have the facilities for so doing, and cask Czech lager (like they're doing with Pilsner Urquell at the moment) is brilliant.

Cask it? What for? Who'd buy it? The Pilsner Urquell is unfiltered and unpasteurised and will only be available in a small number of fast turnover outlets. I've had it and in my view it was OK, but not that special.

Horses for courses. It would just be a loss for Lees and I'm guessing it all comes filtered already.

Maybe it'd just be me that bought it (though from what I've observed, the Pilsner Urquell seems to be selling out in a couple of hours wherever it's available).

Certainly having compared it to the keg version I can see no real reason for all lager brewers not to cask their product other than convention, conservatism and laziness.

All that is necessary for evil to triumph is for good men to do nothing, and all that...

I'd just say "horses for courses".

When we're talking about casking PU, it's not like cask-conditioned ale, but already lagered and then filled into gravity-pour barrels ala proper Kellerbier, right?

You are correct Nick.

In the good old days of communism, Czech draught beer was pretty close to cask. Rough filtered and served on air pressure. It was a sad day when they started kegging So kegging of Czech beer has a very short history, really only 20 years.

Interesting fact Ron. Still don't think it would sell in the same way here except as a novelty.

Marks and Spencer are selling their own brand Czech lager brewed by the Regent Brewery, same strength so I guess the same?. Not a bad price either and surprisingly nice!