Riotous Assembly and an English Antidote 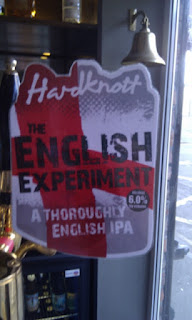 Port St Beer House is one of these places that you find the trendy young things of Manchester.  But the neatly trimmed beards - more or less de rigeur among twenty somethings -  the buxom Laura Ashleyed lasses, elbowing their way to the bar and the general upward mobility of it all may not be Shrimpy's in Kings Cross - heck it may not even be BrewDog - but it does all provide a comfortable and safe, non shaven headed environment to drink in and unlike BrewDog, there is something decent for the discerning drinker to consume.  There is very well kept cask beer.

I go there less often than I should do and it isn't just the fact that the toilet is up three flights of stairs like the North face of the Eiger.  When I nipped up for a pee, well nipped isn't the word, there was a fellow imbiber gasping for breath. "There should be bloody resuscitation equipment up here" quoth he.  "Thought I was going to have a ***king heart attack."  Needless to say, he was one of the non hip crowd that leavens the place somewhat.  I was here though not to listen to such gay repartee, but to check out Hardknott Dave's launch of draught (keg) Rhetoric Ed.I,  a "Star Anise Infused Quasi-Bombastic Belgique Quad" and the English Experiment (keykeg), a collaboration with Fullers John Keeling using unusual English hops. It was good to meet the Hardknott crew again and after a general chat, I joined the throng as Dave leapt up on an upturned beer crate and gave us all the spiel.  That done, the highlighted beers were unveiled on the bar and the supping, sniffing, swirling and general nattering about the beer began.

Now I have to say Rhetoric wasn't my cup of tea.  It was maroon dark, intensely aromatic, with star anise dominant, but a liquorice taste was evident too, as well as many spices, no doubt thrown up by the yeasts. Each seemed to me to be getting on with each other less than harmoniously.  To me it needed more time for the ingredients to gel and get along. It was a riotous assembly of a beer and certainly a talking point.  The English Experiment, was a different kettle of hops entirely. As you might imagine with John Keeling on board, it is far more mainstream.  Don't take that to mean boring. In this case, it most certainly wasn't.  The hops used, Archer, Baron, Bishop and Landlady are all experimental and these seemed to get along with each other famously, to reveal a beer that was a splendid traditional, strong pale ale of some poise and elegance. Once you'd knocked some of the gas out of it and warmed it up in your hand that is. The hoppy finish was resinous and lasting, though in my view cask conditioning would have benefited it, as the subtleties of the beer would be better allowed to shine through - a point Dave agreed with.

These informal nights are a great way to launch a beer and PSBH do it all rather well. I'm a bit of a fan of the place actually.  As for the beers, well they were so different, but none the worse for that. They got people talking and while I didn't care for Rhetoric, I'm sure plenty of others did. That's a good thing, as otherwise we'd all be drinking standard industrial lager.

And that would be a bad thing.

I also enjoyed cask beers from Thornbridge and others. Thornbridge need a special mention as they seem to get cask beers, no matter the style,  just right. Except Jaipur of course, though my half was a slight improvement.
Posted by Tandleman at 13:03

Toilets on the third floor: what about disabled access? Perhaps there's a disabled toilet on the ground floor as in our local Lloyds No. 1 where the main toilets are on the second floor, but I notice it's used frequently by able-bodied drinkers who can't be bothered climbing the stairs, thus making it less available for the people it was provided for. Not ideal.

After your description, I won't be trying that Rhetoric if I see it anywhere.

There is indeed a disabled toilet on the ground floor. Locked normally to prevent misuse I think.

I'm less impressed with Thornbridge than I used to be. When I had Pollards I thought it was... well, let's just say the name is a bit too close for comfort.

"...while I didn't care for Rhetoric, I'm sure plenty of others did. That's a good thing, as otherwise we'd all be drinking standard industrial lager."

Star Anise in beer... hmmm. Boak's got a heavy hand with stuff when she makes sloe gin and it really did work brilliantly.

We probably ought to try a Hardknott beer at some point. Perhaps we'll find one on our upcoming trip to London.

Toilets on the second floor is the one point about the place that is less than completely appealing.

I'm delighted you liked The English Experiment and you are right, this one was too cold through the keg lines.

Great write-up of the night, thanks Tandy.

As much of a pain as the stairs are there is a disabled toilets on the ground floor just left of the bar. Nobody ever sees it though as the eyes on the beer & the bar

Very pleased to hear you're a fan of PSBH, as I happened to be one of three behind the bar on the night of the launch. The keys to the disabled toilet are behind the bar, all that's needed is to ask a member of the staff to avoid the walk up the stairs.

I concur that frequently, the keg lines are far too cold at PSBH. I think the English Experiment worked really well on keykeg, despite initially perhaps being too cold; I have had one bottle where the yeast flavours were overpowering, to the detriment of the interesting hops. I suppose that keeping the other bottle cold might help rectify that issue, it remains to be tested. Having a cask version would have been useful for the fullness of the comparison. However, so far, the keykeg wins in my opinion.

The Rhetoric, I'm afraid, was not my cup of tea, but I appreciate the willingness to experiment.

Thanks for the comments. All I can say is that the brewer felt it would have been better on cask. Look forward to reading more comments from you.