It is one of the finer things that Wetherspoons do. Naming their pubs after local landmarks, historical figures and other such things that is. I like that. It gives a local focus which otherwise is missing in such large pubs. Usually these are accompanied within by interesting memorabilia or paraphernalia appertaining to the choice of name. Some might even say that it is the only individuality that they have and they probably have a point. 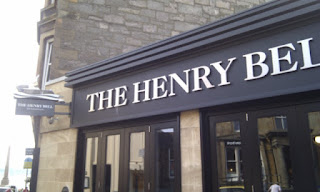 One of JDW's latest openings is the Henry Bell in Helensburgh.  Now I have to admit, I lived within eight miles of the new pub's location without ever having heard of Henry Bell.  John Logie Baird, the inventor of television was a Helensburgh man of course. We were all taught that at school - drummed into us along with the rather long list of things we Scots invented -  but nothing of  Henry Bell.  You'd have thought that they'd have called it the John Logie Baird then wouldn't you? Unfortunately, some other PubCo has beaten them to it. Oddly enough, it is just across the road.  So Henry Bell, Provost, steam engineer, spa and hotel owner and shipbuilder it is. Henry Bell commisioned the first commercial steamship in the world, the Comet and though you won't find it in the pub, there is a beery connection. In 1820 the Comet was wrecked in strong currents near Oban. Its engine was salvaged and went on to serve in a brewery in Greenock.

Now you'll possibly be aware that JDW do their new pubs rather differently these days. No wood and velour and naff corporate signage any more, but clean chrome, glass, slate and tile is the order of the day and dare I say it, the Henry Bell looks classy. A small frontage leads to a long pub with an interesting bar along the left wall, several different kinds of furniture and to the rear, a larger oblong room, full of light, with an outside drinking area off to the right. Where there is wood it is very dark indeed. You can even watch them cooking the meals should you be so inclined.  The Gents, wonder of wonders, is on the ground floor. For once it's the lassies that have to trek upstairs for a "comfort break." Oddly, there is much more about Helensburgh on the walls than Henry Bell and a wall full of old televisions would seem to imply a frustrated sense of what might have been. 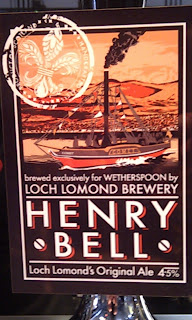 Of course the main reason for any pub existing has to be beer and cask beer at that. In Scotland it is still a rare beast outside the big populations, but here we have six beers on. Interesting ones too including a house beer and pleasingly mostly from Scottish Breweries.  Luckily, a couple were from Fyne Ales, including the delightful Jarl, which was in tip top condition. My old Mum liked it a lot, but then again, she doesn't get out much.  One other delightful thing about Scottish JDWs is that they have a subtley different menu, with cod being replaced by the superior haddock and delicacies such as Cullen Skink, lentil soup and haggis on offer. They even have scotch pies, but I doubt if they are deep fried. Perhaps on request?

In Scotland I'd say you'll probably judge JDW a little less harshly than you might in England. Outside main Scottish cities, you have mostly somewhat couthy local bars and little real ale.  JDW really is something different. Helensburgh, having a rather large Royal Navy base on its doorstep, is probably not a typical Scottish town and there were quite a few English accents to be heard, but hopefully our dear submariners will find it an excellent addition to the local pub scene when they return from a long patrol.

If I lived there, so would I.

Staffing didn't seem to be a problem, but was the usual JDW mix of slapdash and willingness to please. Attention to detail such as clearing up tables was poor. The haddock was lovely though.
Posted by Tandleman at 08:49

Up north, in a JDW, do they use sparklers?

Whatever the name, people just tend to call it Spoons, though ;-)

I remember in the holy days of decent Boddington's (the 70s) that every Boddies pub was decorated inside and out in an identical style: same furniture, decoration, lettering, and even identical polystyrene ceiling tiles. And they only sold two beers - Boddies Bitter and Mild - but were still praised for it.

Today, a good Spoons may sell 10 different real ales, but gets slagged off because they, like the old Boddies pubs, have a corporate style. You just can't please some real ale drinkers.

Spoons have contributed more towards the survival and growth of real ale in this country than anyone else, including CAMRA.
Fact.

Opinion ~ and that's a fact.

Well he has as good a claim as any and that's a fact. And good old Hengist too for that matter.

For those interested in Henry Bell, Tyson has provided this link:

up in Kilcreggan next week , will give it a try on the way, hard to find a decent pint around there although the Kilcreggan hotel normally has a couple of good ones on.