Saving the Best to First - The Bermondsey Beer Mile


The Bermonsey Beer Mile or rather, the Bermonsey Beer Mile and a Half and a Bit, but that hardly trips off the tongue. Bermondsey Beer Mile it is then.  The walk itself is quite interesting, particularly if you fancy seeing a council flat bit of London and quite what the locals make of the bearded hipsters wandering about, I don't know, but I didn't see any of them getting duffed up, so I suppose up with them, the locals must be putting.

We walked from our place for the mile and a half to get to the beginning, but as we wanted to end up back on our manor rather than in Millwall, we passed by the early topers kicking off at Anspach and Hobday/Bullfinch and wended our way past Brew by Numbers, Kernel and Partizan to our destination, the furthest point on this upmarket brewery crawl.  Fourpure is set in the furthest recess of an industrial estate and unlike the others not in a railway arch, but in a large industrial unit. 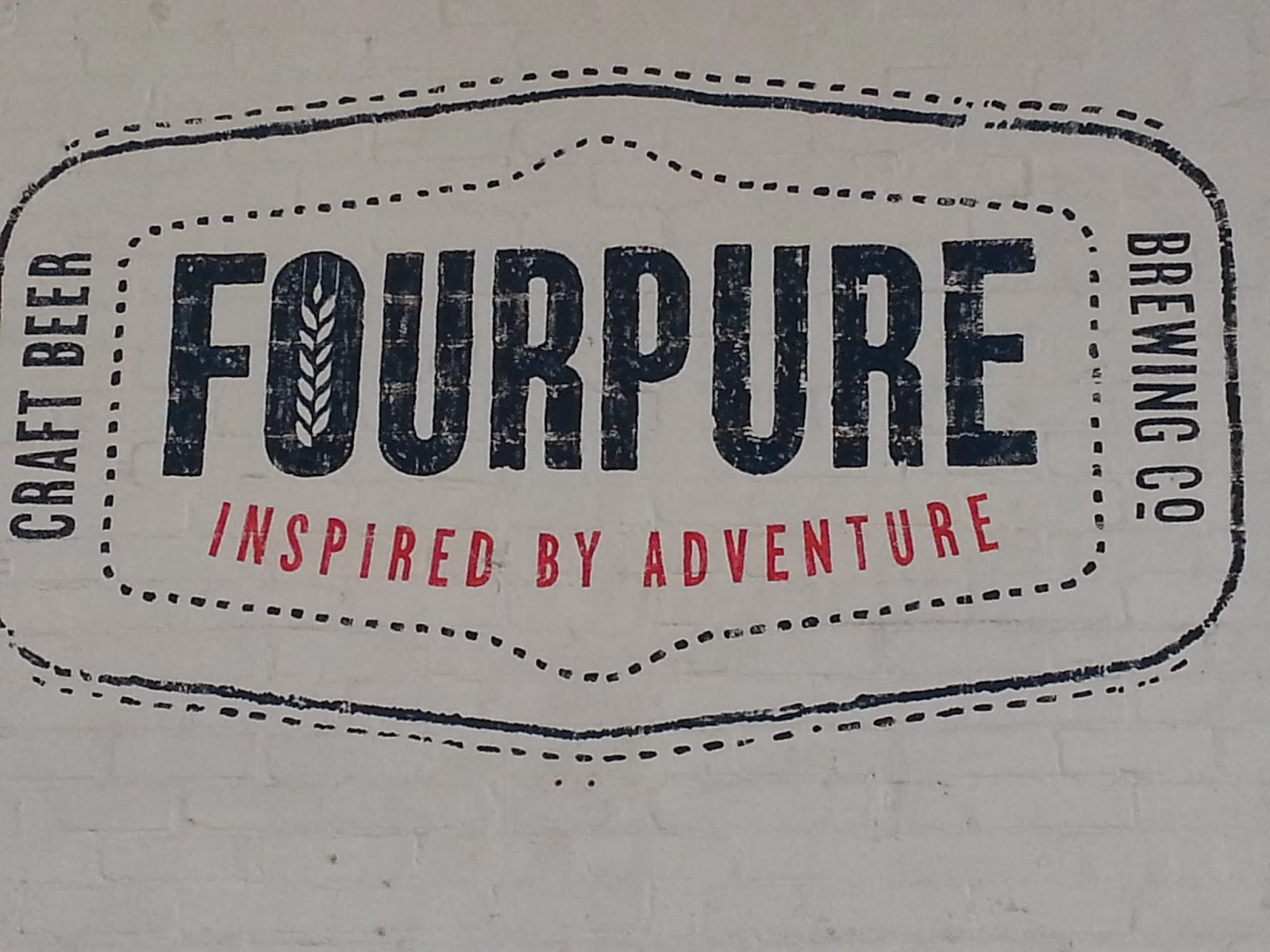 Fourpure is a decent sized operation with gleaming stainless steel vessels and John Driebergen, a very personable American, as Head Brewer.  We kicked off with a rather excellent pilsner beer of 4.7%, all body and noble hops and chatted to John about about the place.  The conical vessels are Chinese and do the job required well, with mash tun and other vessels coming from Purity when they upsized, though they needed some minor re-engineering for conversion from cask to keg brewing. Apart from the pilsner, there was a very American line up of beers all served from wall taps directly from the cold room.  A Sierra Nevada like pale, though with less sweetness, an American Brown, dark and luscious, an Oatmalt Stout with deep flavours but to my palate hampered by lots of carbonic acid from the CO2 and a rather warming IPA, which at 6.5% drank its strength. The beers are all sensibly priced at £1.50 per third to £4.50 a pint irrespective of strength. John said "Anyone charging more than that in the brewery, even in London,  is ripping you off."  Are you listening others?

I enjoyed our chat with John who seemed a most sensible chap, particularly as we seemed to agree on things like murky beer being a bad idea, London is a poor place to drink cask and that sort of thing. Anyone that agrees with me on such matters can safely be regarded as a prince among men.  Surprisingly there was only around ten customers, so that made it even more enjoyable in chatting terms, but I suspect that won't last. 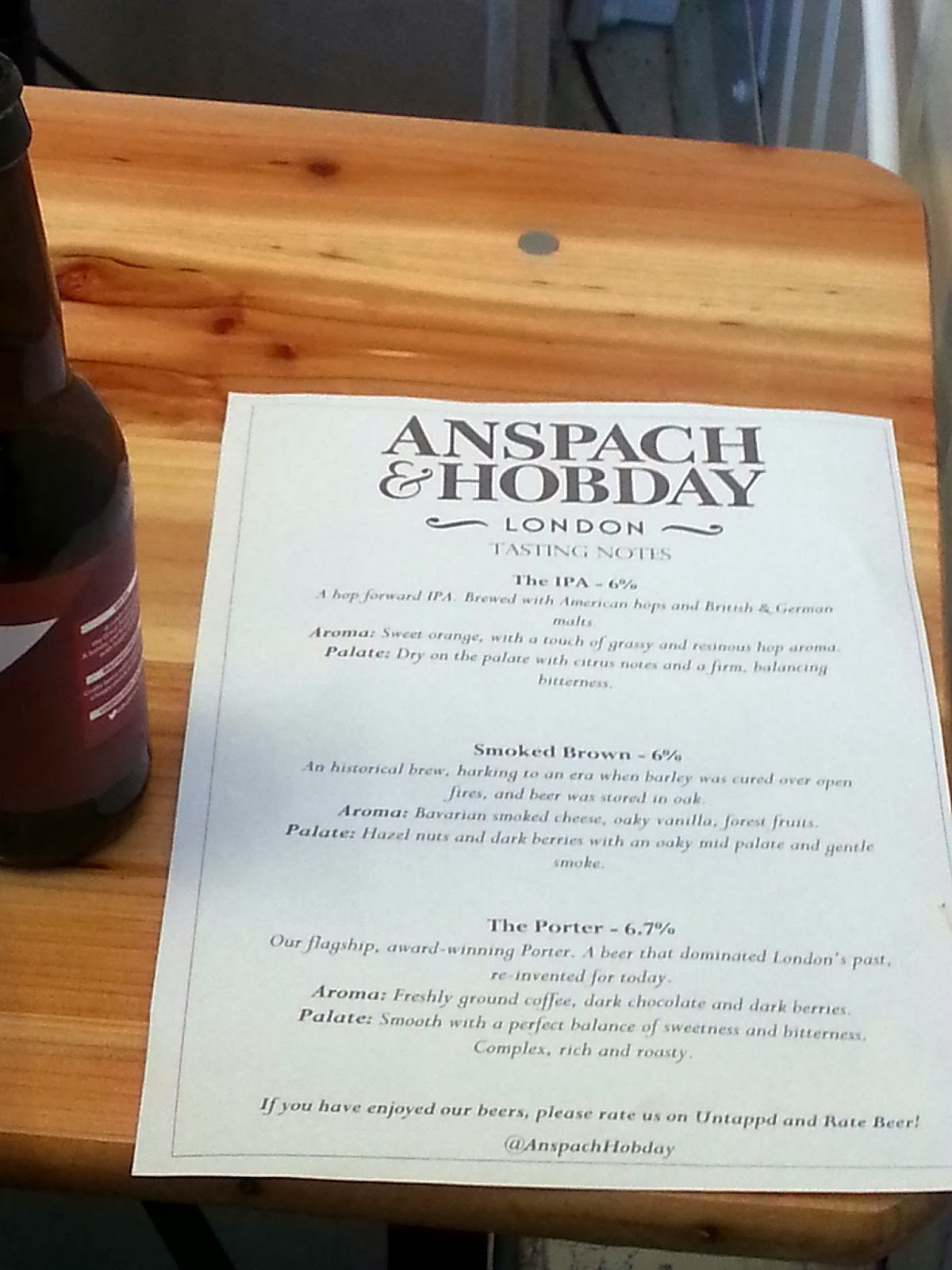 All good things must come to an end and despite the fact we could both have supped that gorgeous pilsner all day, we set off to complete the crawl, though (as it turned it unwisely) deciding to omit Partizan and Kernel as we'd been there a few times before.  But walking makes you thirsty, so we did call into Kernel, but beat a retreat from the mayhem in there. Jammed full and with a queue at least thirty long, we decided not to bother.  Retracing our steps to Partizan was ruled out, so we pressed on.  We quite liked our next stop, Brew by Numbers for the friendly and chatty crowd. E enjoyed her Golden Ale though my Saison with Nelson Sauvin was like fermented pineapple juice - way too sweet for me, despite a little farmyard funk.  Unfortunately the beer I really wanted to try, the stout, ran out as I queued - yes more of that - so we left and made our last call at Anspach and Hobday/Bullfinch where two breweries share kit and outlet in a very small railway arch absolutely crammed with people. Lots of the beers had run out here and E was most unhappy that what was left was all too strong for her.  I had a rather good bottle of porter, which was thick, oily, roasty and bitter. Oh and clear, as all the beers seemed to be looking around me.  A bit disappointing that for E there was nothing to drink, but we were promised a better range from keykeg from next week.

And that was that. Pick of the bunch by a Bermonsey Mile was Fourpure for really drinkable, clear, well made beers and sensible pricing.  An observation I'd also make is that this brewery crawling is becoming just too popular for the rather small premises and numbers wanting to get in on the act. Something has to give there surely?

Still, on a perfect day for a walk, it was a rather pleasant afternoon out.

Can anyone tell me how some of the breweries get away with illegally selling beer in 33cl draught measures?

I did find that unusual in kernel, halves in BBNo though i thought? we did the trail (except fourpure) about a month ago and was much quieter then, though Kernel was getting busy just as we left and BBNo we were lucky to get a vacated table. Anspach & Hobday just opened that day and they only had the porter and smoked beer ready.

Ref 1/3 pints: Because they don't know any better? I'm serious. Local brewer here suggested using 500ml glasses at a beer festival as trading standards had told him as long as it was metric he could sell any size he liked. Obviously that's OK for 'off' sales, but not draught 'on' sales.

I'm sure that it I'd enjoy the crawl very much but as you allude, it is a world away from the experience of beer drinkers outside London. Up here, we want good cask beer and new beers from the appropriate dispense but the whiff of 'Emperor's New Clothes' still lingers whenever we read reports from the metropolis.

Emperor's new clothes - fine, don't come. All the more for us.

There is now a new brewery on the mile - Southwark Brewing Company - selling their craft cask ales from handpull, and at a decent price! (And in pints if you want them!!)