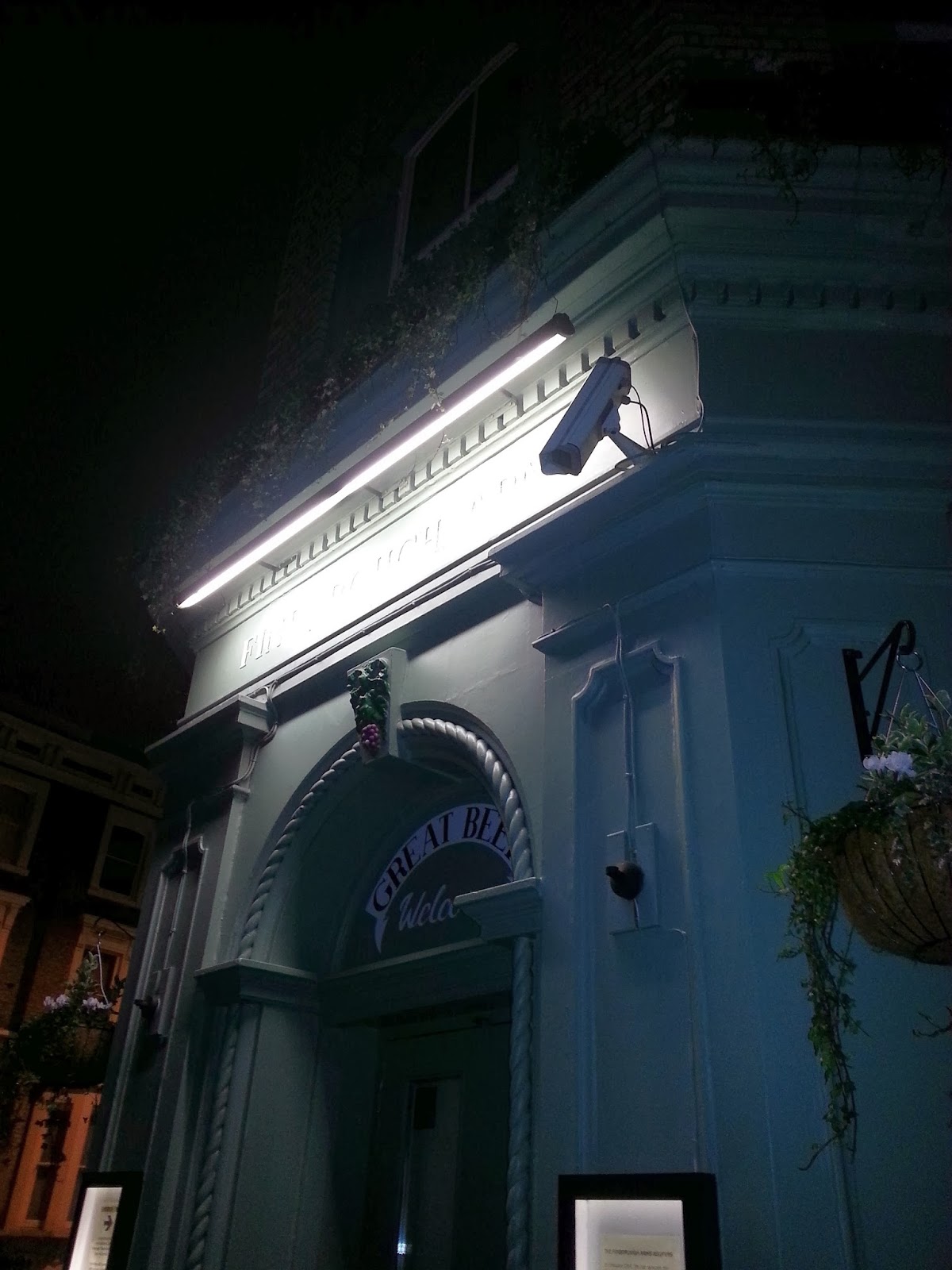 I like wedge shaped pubs.  There is just something about them, the way they sit astride two roads with a "Look at me, aren't I bloody great?" sort of way.  They are always interesting inside too, with quirky layouts and all the better if they have floor to ceiling windows from which you can smugly peer at those unlucky enough not to be inside supping ale.  Well that's the theory anyway, so how does an actual one measure up in the real world?

The Finborough Arms is a wedge shaped pub, so there's a good thing right away.  It is painted in a very fetching pale green that I have to say suits it. The second good thing is that it has been recently acquired by well known London licensee and ex beer blogger Jeff Bell, who has successfully - very successfully - built the Gunmakers in Clerkenwell into the thriving and popular pub it is now.  The Finborough Arms it seems had been a wine bar for some years and has a small theatre above it. Well that should be a ready made "audience", so a flying start there.  It is situated in a busy residential area in Brompton, just a few hundred yards from Earls Court Exhibition Centres, though Brompton West is your tube stop.  The area around all looks pretty well heeled so, second tick in the box.  The Finborough should attract customers, as I didn't see any other pubs in the immediate area. But pubs are all about the offer aren't they? Here Jeff doesn't disappoint with a canny but solid offering of six handpumped beers, two real ciders and a gleaming array of tall keg fonts offering Koenig Pilsner as his "cooking lager" with Lagunitas IPA on a permanent pump too and, in a bit of a coup, Tipopils, an Italian pilsner of some repute, (though I have to say not to my taste), but doubtless an attraction to many.

On its opening night last night the place was bursting as you'd expect and was admirably run by Jeff in his usual ebullient way. His very efficient staff  seemed to hit the ground running too. The beer - strictly middle of the road, but well thought out - Jeff knows his London public and what sells - was, as you'd expect, in top condition and cool.  There won't be any problems in that direction.  For those interested in such things, the bar is basically wedge shaped too, with one leg of the wedge dedicated to keg and t'other to cask.  Toilets are both upstairs and downstairs and there is a further room and seating, though it looked a work in progress. The windows are just as you'd like too.

All in all impressive.  He'll do fine.

Not sure if there will be food, but I did see pickled eggs if that'll help.
Posted by Tandleman at 10:47

I've been following this opening with interest, and given my love for the Gunmakers it's good to see the business doing well, and those things that Jeff does so well - ie quality cask beer, in both reputation and condition - replicated at the new gaff.

He'll do well Leigh. Jeff knows what works for the crowd he wants to attract. That's a winning formula.

That's an MP lurking in the background of your photo of the taps.

Hangover on Saturday was savage.