Are snacks in pubs a good thing? I'd say so, but in the never ending search for margin and profit - just look at the good old Morning Advertiser for tips on how to do so - are pubs missing a trick in not supplying simple, reasonably priced snacks to customers, who will then carry on supping?  Many of us just don't want a meal in a pub, but other than crisps, nuts and scratchings, there is little to sustain you if you are out for a few pints and feel a tad peckish.  A full meal will stop the most hardened pint drinker in his or indeed her tracks. Remember the days when you could get a sandwich or filled roll more or less anytime? Or the pie warmer with its last dried out pie finding a sure sale at 9.30 in the evening?

Now some London pubs have been doing this for some time with a more gourmet approach. Simple food such as Scotch eggs or pork pies, garnished with a few leaves and a sliver of tomato, served on a roof slate for north of five notes, but while that may be a port in a storm, it doesn't quite cut the mustard - pun intended.  No My Dears you want to get yourself to the Black Country where pubs are still an astonishing throwback to the seventies, without the smoke.  Here you can buy a pork pie in almost any pub at all, or a filled cob - cheese and onion only - for no more than two quid and often less. OK. No added garnish and no roof slate or board - just a plate and a pit of Colman's English Mustard -  but you do get a locally made pie, or a crusty, chewy cob, filled on the premises, with a hunk of cheese and a big chunky slice of onion to keep you going.  Matched with a peerless pint, what more could one want? 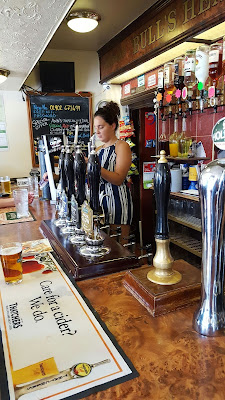 Of course, even in the Black Country,  there are plenty of pubs doing meals.  Our first stop, on a Tuesday lunchtime, in Sedgley, is a case in point. Busy with diners and with exceptionally kept beer, the White Lion was doing a roaring trade in meals. The Landlady, a veteran publican, chatted merrily to us as she rushed about and we joked about the Good Beer Guide entry remark of "You won't leave here hungry". "You definitely won't". she retorted.  This was a turnaround pub we were advised, something the Landlady and her husband - the beer man - specialise in doing.  Giving the people what they want still works. We were in beer mode so just had a couple of pints, but I bet we could have got a filled roll if we'd asked.

We did ask in the Bull's Head along the road. "All gone" quoth the barmaid "but hang on."  A quick shout out the back and a reply "How many? We'll make some fresh for you."  Cheese and onion of course, as big as a baby's head and £1.40 each. Of course we stayed for a couple more pints of Holdens, hopefully proving my point.

Reasonably priced and tasty simple snacks aren't the most sophisticated of things, but they do keep people in pubs. Cheap to produce, good mark up. Worth doing in the right circumstances I'd say.

I wrote about this before here nearly four years ago. At least I'm consistent.

After we left the Bull's Head, we arrived at the famous Beacon of Sarah Hughes Mild fame, just before half past two, in time to get one pint before they chucked quite a crowd out. The Black Country is very old fashioned in so many ways. Half past two afternoon closing eh?
Posted by Tandleman at 08:54

The cheese and onion cobs in the Beacon and their Dark Ruby Mild make for a wonderful combination.

You never see the old-fashioned four triangles cheese or ham sandwiches either now - just something in a ciabatta with a "handful of chips and a few dressed leaves" for £7.

I agree that pubs are missing a trick.

And not forgetting the pork and stuffing cobs at the Great Western (Wolverhampton Low Level!), where there's usually Holdens AND Bathams.

My local, the Guest House, serves good value snacks at lunchtime, as you can see here.

The Church Inn in Northenden does ham salad, beef salad and cheese and onion barms for £1.25

They didn't have any beef left so made us fresh corned beef salad, just what was needed

The Horse and Jockey in Stapleford does cobs,cheese and onion of course and also ham salad and the likes for only £1.40,
there is also a great choice of real ales on the bar all of different styles and strengths.

Definitely worth doing! What is with pubs that chuck a few crisps and a dried up lettuce leaf in with your sandwich, and charge in excess of five quid for the privilege?

Coming late to this, but yes, we discussed this at some point on our short London crawl last week. Agreed. Even a little bowl of good olives with a toothpick would help a lot. And/or a bowl of cheese cubes with a toothpick like in many Belgian beer cafés. #BreadFreePubSnacks

Enjoyed a couple of cheese & onion cobs at the Great Western myself once, but I admit to having ditched the onions, they were just too strong for my wimpy palate.

You have done a great work. Thanks for making this blog. You helped me a lot on my research topic. Keep it up guys!