I mentioned as a footnote in my latest blog that we had visited the Beacon Hotel in Sedgley on our recent Black Country trip. This pub is an old friend of ours, but I was taken aback to learn from our leader that we had last visited in in October 2009.  Gosh it didn't seem anything like as long ago. Doesn't time fly? 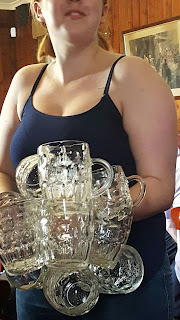 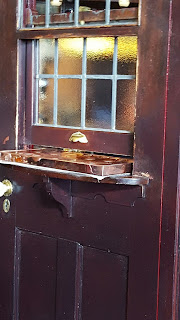 Much has been written about this pub and I recommend for those that wish to know a bit about its history to read Jeff Evans splendid piece here.  We entered the pub at about twenty five past two. Now this would not normally be a key piece of information, but here in the Black Country where they follow a different path in so many ways, it was important and it brought memories back.  We had just squeezed in before the pub closed for the afternoon at half past two.  We quickly ducked into the parlour and ordered beer from the odd servery hatch with its sections facing out into each of the separate drinking areas, pausing only order pints of Pale and to specify straight glasses as opposed to the handled jugs preferred here by the majority, not as a result of any modernity or nod to hipsters, but because they always have done. Well at least in recent memory.

We sat at the corner bench seating nearest the door and servery and promptly at two thirty, the shutters came down.  The pub was pretty busy, probably around thirty or more customers, all drinking beer on a Wednesday afternoon in a quiet part of the world, on the main Birmingham to Wolverhampton Road.  Unlike us, they all seemed to be local and quietly supped up and drifted away.  The barmaid emerged and grabbed many handled glasses in a bunch and disappeared with them.

As the pub emptied, we supped up too and left, me wondering how many pubs these days would call time on a busy pub at two thirty on a Wednesday. Not many I reckon, but that's the Black Country.

The very nice barmaid allowed me to take a photo of her with all the empties on the basis that I didn't include her face in the photo.

The other photo is of the closed servery. You have to trust me on the half past two bit.
Posted by Tandleman at 21:23

How utterly bizarre! Sending paying customers away during what is normal drinking time throughout most of the country. You sometimes wonder whether some licensees have a death wish, because I'd be very surprised if there were no other places in that area where a drinker could get a pint after 2.30pm.

It must work for them or they wouldn't do it surely Nev?

Not necessarily. Businesses can go to the wall as a result of bad decisions and practices. It would just need a nearby rival to plug that gap in the market for their customers to seep away.

Not just me who much prefers a straight glass then. I'm convinced the beer tastes better, but then I believe in the Loch Ness Monster and that Bass is still a great beer.

Central Brum (partic the Nichosons) introduced dimples a few years back and it made the beer seem watery to me, could have been the cellarmanship though.

Pubs can open and close when they want; more important that they let folk know when that is and apply times consistently. Where owners want to keep control of the operation and not work themselves into the ground shorter hours may be good business practice.

"Pubs can open and close when they want". Obviously - I never said otherwise; ultimately it's up to them, but I'm allowed an opinion about the business sense of such hours.

However, I have in the past year or so been annoyed on a couple of occasions by erratic opening hours, opening and closing on a whim. The hours should be advertised and stuck to.

The thought process is probably:

(a) they've looked at it and concluded they don't think it's worthwhile opening all day, and
(b) they don't want to have staff hanging around on the off-chance there might be customers. The pub closes when it closes and the staff knock off

Far better than all the pubs that don't open at lunchtimes at all during the week.

It would be interesting to do a survey of how many pubs still open traditional lunchtime hours but close in the afternoon. Not got GBG to hand but I think there are more than you might think.

"The pub was pretty busy, probably around thirty or more customers, all drinking beer on a Wednesday afternoon in a quiet part of the world, on the main Birmingham to Wolverhampton Road. Unlike us, they all seemed to be local and quietly supped up and drifted away."

In other words, they turned more than thirty paying customers out. Yes, they went quietly because they knew the rules, but I'd be astonished if they all would have been leaving at 2.30pm if the pub was routinely open all the afternoon. Depriving yourself of available income makes no business sense whatsoever.

I agree that it's up to licensees how they run their pubs, but - unlike some people here - I don't feel obliged to agree that all their decisions are correct.

Look at it this way. Thousands of pubs close at 11 pm even though they could legally open later, and turf out a lot of customers who might well stay for another.

In what way is this different?

Lovely jugs that barmaid has, quite a handful.