As I write this, the clock is ticking. The day has come. After 104 days, pubs are free to open again, albeit with many restrictions to limit the possible effect of the dreaded Covid-19.

It is a day that has divided opinions.  Some feel it is too soon, some too late, some pointless as the experience won't be exactly the same as it was. Some still sceptical about going out and mixing with others - even under controlled circumstances -either because they have underlying conditions - or put starkly - because they are feart.  And that isn't a criticism. The virus isn't going away yet. It doesn't have to do anything really. It just has to be. This isn't an imagined spectre in the night, a fear of the unknown. It is all too real. People have seen the effect it has had on many and wonder, not unreasonably,  if that could be their fate. Fear is a reasonable response. 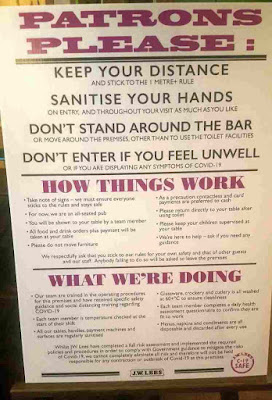 Well that's the background, but the reality is that sooner or later, the risk has to be transferred to the individual. The economy can't go on as it is - people can't go on as it is -  so today or very soon, is the day you have to piss or get off the pot.  It doesn't just apply to pubs of course. Restaurants, hairdressers - oh yes - hairdressers - are in the same boat, but you don't have to sail in that boat. You can just stay at home and wait this out in comparative safety. But it will likely be a long wait and it will transform your life from living it, to remaining alive. Your choice and the knowledge that you are more likely to die on the way to the pub, than in it of Covid-19, is an equation that we all must work out for ourselves.

Pubs are aware of this. The Government is aware of this.   Guidance has been issued and while not having the force of law, it is something that really should be followed. It will minimise risk and make that decision much easier. There is little evidence that this will be ignored by pubs. It would be irresponsible and would reflect badly on them at licence renewal. It will vary of course and there will many pubs and many people, who while philosophically inclined to open, or to be there as customers, will just be a tad cautious and wait and see. The middle course if you will.

Last night a local licensee and friend invited me to see the preparations being made. It is a medium-sized managed house and the changes are mostly in distancing and the installation of rather unobtrusive perspex screens to separate areas. Some tables have been removed and table service of course will apply, as will collection of customer data. You'll pay at table wherever possible and of course, order from there. Staff will wear visors. One way systems, separate in and out and plenty of sanitising stations, as well as free flow of air, will make it as safe as possible. It is one of my locals and I'll feel as safe there as I do in Aldi or the like - and I go there. I have to.  My friend, the licensee is taking it seriously and the brewery is to - and I'm sure most others will do so too.

The simple message about any pub now, is if you don't feel comfortable and safe - leave. Frankly it was ever thus, but never more important than now.

I also had my first (and second) pints of properly cask conditioned, freshly brewed beer.  It was nectar from the Gods.

I won't be at the pub today, due to a family "do" following E's Mum's passing, but I will be tomorrow. Life is for the living.
Posted by Tandleman at 12:03

Twitter seems to be full of people still scared to go out and who think anyone who isn't is being utterly irresponsible. There is I think little room for social distancing on the self-declared moral high ground at the moment.

Guidance has been issued and while not having the force of law, it is something that really should be followed. ... There is little evidence that this will be ignored by pubs.

I went out for a walk at 11:30 this morning and passed three different bars with outside tables that were practically touching, in one case hosting a group of about ten. Maybe punters had pushed them together; hard to stop people doing stupid things if they're determined to, particularly if they've had a drink.

It's not so much the level of risk today I'm worried about - more that if people act normally the risk will be higher next week, higher still the week after, and the week after that the death figures will have started climbing again. There are few things I'm looking forward to more than a couple of pints in a quiet corner of a pub, but I think this may turn out to have been too soon. I hope I'm wrong!

Very well put, Peter. Take it seriously, respect people's right not to go to a pubs. Or to got to a pub.

You need to stay at home then Phil.

I'm visiting a pub for the first time tomorrow and though I'm generally looking forward and hopefully meeting a friend, I am slightly anxious. I think the important thing is to just get through the door

Went out at 6.00pm yesterday (Saturday) to a Marstons pub in the suburbs of Oxford. Would have turned away if it had been busy.

Two pairs of guys sat outside. Maybe eight or nine in the big room. Went into the small room, seating capacity about thirty and just one other punter therein for the entire ninety minutes duration of my visit. one guy - a relief manager - behind the bar.

No issues at all. Just be careful, and sensible about when and in what venues you drink. And walk, don't go by bus !

Should have added that as I hadn't been in a pub since 14 March, the Marstons Amber Bitter tasted like nectar. It was actually a well-kept pint and at £2.90, a very reasonable price too.

I went in a couple of pubs, TAND. Do I get a pubman badge?

Amazing that so many seem are afraid of going out. The lockdown is over and people need to get on with life. Instead many are still rotting away sheltering at home and chattering away like frightened rabbits.

A careful look at COVID-19 figures will tell you that death isn't lurking around every corner (or in every pub) and only government propaganda is keeping this always overblown "pandemic" alive.

On my travels around over the weekend it was clear that many pubs hadn't yet reopened and I have to wonder whether many of them ever will.