And the Sun Shone Too! 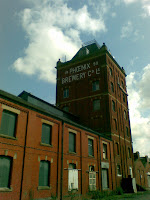 Saturday was the annual barbecue at Phoenix Brewery, Heywood. In addition to the staff and some customers, a few of us CAMRA soaks are invited by Tony Allen, the owner and brewer, to partake of various delights from the grill and curry pot and of course Phoenix beers.

As you can see if you click on the photo, the brewery commenced brewing in 1898 and continued to do so until going into liquidation in 1937. Cornbrook Brewery then stepped in buying up all the existing assets (and the pubs) unfortunately with no intention of keeping the business going. You can still see the Phoenix emblem on a few local pubs.

Tony has been there since 1991, having moved the business from Ellesmere Port. He now brews well in excess of a million pints a year. Having a strong interest in all things historical, he has taken to restoring Phoenix to its original form. The building is a more or less complete example of a late Victorian Tower Brewery and despite years of neglect, the buildings are slowly being renovated, initially concentrating on the building fabric. The cobbled yard is splendid and in warm sunshine, despite the rainy forecast, made a great backdrop to Phoenix Hopsack and White Tornado. The brewery itself is in the original malt store and maltings. The Hopsack was hoppy, pale, resinous and distinctive and the White Tornado, quenching, fruity and wonderfully moreish, though I didn't get any more, as it ran out!

Many pints later, we tottered off back to the bus stop, looking back down Green Lane where the brewery tower dominates as it has done for the last 110 years.

For those who are interested, Tyson the Beer Hound was also there and in good heart.
Posted by Tandleman at 15:58

Labels: Days out, Phoenix. Brewery
Email ThisBlogThis!Share to TwitterShare to FacebookShare to Pinterest

I'm a bit confused and you're the only one of us who has been drinking.

So, in 1937, the brewery was bought out and the building shuttered, but left more or less intact? Has it really been standing for the last 70 years, avoiding the march of progress? Amazing. Be thankful it wasn't turned into condos and a snooty pub like Henry Weinhard's magnificent brewery here in Portland.
http://tinyurl.com/5jr2dv

And the other bit that confuses me is the new Phoenix Brewery. Tony Allen started a micro by that name and then moved in to the existing site?

Well the building did have various uses including as a cold store, a convenience food factory and lots of other stuff, but it wasn't structurally changed.

Tony had a brewery called Oak Brewing and when he moved to Phoenix in 1991, continued to use the Oak name until around 1995 when he started trading as Phoenix, though the company is officially still Oak Brewing I think.

Nothing wrong with it that a million quid wouldn't sort.

As one, if not the only one, interested, glad to hear that Tyson was in good heart. Glad to see that you were, as well:)

Tysons Blog is now by invitation only - how do I get an invite?

It's closed at the momemt.

When they're on in the Guest House, my local in Southport, Phoenix beers seem to fly out of the handpump: blink and you miss them.

I remember drinking Oak beers from Ellesmere Port in the late 80s and early 90s. Although Oak wasn't bad at all, my own view is that Phoenix now is far better than Oak was then.