Tuesday was an exciting day for me. Not just because of the monthly CAMRA Branch Meeting which I chair (and that's quite exciting)  but because the stout I brewed jointly with Allgates Brewery and two fellow bloggers, was to make its bar appearance.

Allgates is a fantastic brewery with well made beers that have that elusive drinkability.  Now you can wax lyrical all you like about wine barrel aged imperial double saisons and their ilk, but the essence of good drinking is a decent (cask conditioned) pint of good honest beer.  Substance over style if you like. (And even if you don't like.) In fact here's a point of view. There's a big difference between really good drinking and what the beer geeks might term "awesomeness" in beer.  One is a social lubricant that makes the world go round just that little bit better and brightens your life accordingly, as an accompaniment to it.  The other is perhaps a tad more introspective and exclusive. All too often it comes across as a one dimensional, fleeting paean that worships the product (often for its bragging rights) more than the moment, the company or the occasion. 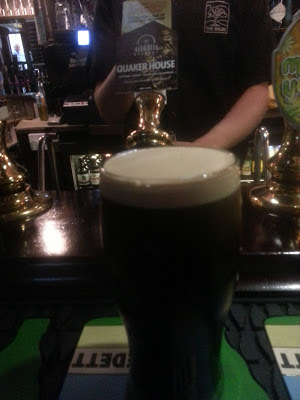 Right. That's off my chest, so back to our Quaker House.  Like all Allgates beers, it was named after a defunct coal mine from the area around Wigan, which used to yield many millions of tons of the black stuff.  Appropriate then on two levels at least.   Having agreed we'd produce a stout, it was my hope to persuade my fellow brewers that it had to be a real stout of premium drinking strength and most importantly, it had to be as black as the ace of spades and not a pale, see through porterish excuse of a beer. In my view, if you can see through the bloody thing, it isn't a proper stout. Fortunately that idea was readily agreed and there is no doubt that this is a proper stout. Jet black, with a gorgeous off-white, creamy head, it looked like Guinness used to look before they fucked it up completely many moons ago.  The oats gave it a tremendously smooth mouthfeel with roast and chocolate malt and decent hopping from the Warrior and Galena hops came through nicely.  It is a deep and satisfying beer which drinks easily and belies its 4.9% alcohol.  The finish is long and roasty with lingering hops. It coated my palate wonderfully.  The beer is pretty damn good. If I had my time again, I'd have perhaps have suggested a few more resinous hops in the finish, but I remind myself it is a collaboration and that we have produced a beautiful, easy drinking stout which has enough complexity to make it a cut above the ordinary.  Gratifyingly many of our members supped it with pleasure.

It was also a great pleasure to me that it was hosted by the Baum, CAMRA's National Pub of the Year, so no doubts about quality of keeping and dispense. Served with perfect conditioning, at around 12°C and sparkled as God intended, I was a happy man.

Thanks again to David and Jonathan at Allgates. Princes among men.

Tyson and Jim (my fellow collaborators) will have their barrel on soon. Jim's is on Friday at the Joshua Brooks in Manchester I believe. Tyson TBA.

My chosen charity (it was kindly donated by Allgates) is the Salvation Army in Rochdale to help with their work with the homeless.

I wanna sink one of these because it's tandleman beer and I reckon it will be awesome and I could brag about it. Sorry.

looks like a cracker tandleman, my local gets lots of allgates, ill badger the landlord to get some(if theres any left!)

Blogger beer in collaboration with a microbrewery...could it be any more 'craft'?

Second paragraph is your opinion, of course, and you're entitled to it, but I'd reject the idea that there's a right way to enjoy beer and a wrong way, and the suggestion that those imperial saison drinkers aren't having just as much fun as you, but in a different way.

And, as an introvert, it's reads to me as if you're saying that if I don't drink like an extrovert, I'm not doing it properly.

I don't think he's saying that, just that if you are appreciating beer solely for its own sake without regard to occasion or circumstances you are somewhat missing the point. The occasion may be simply winding-down in front of the telly - you don't have to be linking arms and singing "Roll out the Barrel".

It's like having a wine tasting as against enjoying wine in the context of a meal.

Or, perhaps, saying you like track days but don't care much for road driving.

I do like my Double Saisons with a twist of Marmite myself, BUT I am completely at one with my fellow collaborator, Tandleman.

Beer should be the lubricant that helps the conversation flow, NOT the centre of attention itself.

As Peter said, mine will be dispensed at Joshua Brooks (a place to drink great beer, served well). Rumour has it that there may be a rare appearance of Allgates Gin Pit too.

If you come, I'll be the bloke with a pale creamy beer 'tache and a grin like The Joker!

So, who has the authority to define 'the point' of drinking beer?

'It's like having a wine tasting as against enjoying wine in the context of a meal.'

Doesn't float my boat, but what's wrong with people doing it if they enjoy it? Seems to be an assumption that, because *you* wouldn't enjoy it, they can't possibly be either, and that any claim to enjoyment is a pretense.

It all just seems deeply judgmental and superior to me.

Having said that, I'd be equally annoyed by 'tasters' suggesting that pub-going cask ale sessioners are missing the point, too!

@bailey I think he is saying beer is like sex. It's good by yourself, better with another and if she has a twin, better still.

Will any of it be heading anywhere near London?

(Or Amsterdam, Brum, Cheltenham, Fleetwood or Mansfield at very specific points in the next few weeks when I shall happen to be in these places)?

Rob: You have caught me out. Damn.

Bailey: I'm not asking you or anyone else to roll the barrel out, just making an opinion point based on my experiences. If I was being unkind, I could suggest that your response was somewhat judgemental. See what I did there?

I think I put enough context and qualifiers in to my piece. Words like "might", "perhaps" "comes across". They are hardly original observations either.

Of course I agree that there are occasions where beer is the star and indeed the point, but maybe not for me, in my bedroom, with a glass of rare beer and a laptop for company, but hey ho.

Cookie: I'm not sure I'm extrovert enough or man enough these days to take up your suggestion, but I like your thinking and direction of travel.

Excellent stuff, I may have to bimble down to JBs tomorrow for a couple of pints.

Just experimenting with being forthright and grumpy. Didn't really work out.

Sounds like my absolute perfect pint. I'm hoping against hope that everyone heading down to JBs on Friday doesn't drain the barrel before I get there on Saturday afternoon...

Bailey: Always worth a try. Assume smiley.( I know you don't like them.)

I'm still trying to get my head around stout being poured through a sparkler.
Suewly you'd die of thirst waiting for it to settle ?

PPT: You need to get out more.

It's good to see Allgates back on track; they went through a bad patch a few years ago when - to my mind - the beers were nothing special. Recently I've really enjoyed their offerings. Unfortunately, I doubt I'll see the Tandleman stout around here (Southport), but if I do, I'll certainly give it a try.

As for "awesome": I'd question the critical credibility of any grown-up who uses that word seriously.