There are quite a few London Breweries that are located in railway arches.  In fact that day, we'd visited two, but this time we were heading for a new arch and not a new brewery, but a new craft beer outlet. Or is it a pub? Well, we'll see. 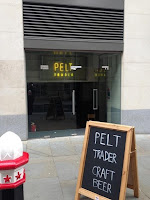 The area around Cannon St station is suit territory, so the new Pelt Trader, a Euston Tap offshoot I believe, should have a ready audience during the week, but on a Saturday it was fair to say that the place was pretty empty.  To be fair though, it was the first week of trading.  Now I don't know why it is called the Pelt Trader as I suspect, even digging into the dim and distant, that there hasn't been that much pelt trading on this spot, though maybe some historian will point out I'm wrong and that woad covered precursor Londoners did indeed trade pelts from here, before catching the tube home.  It is a big arch is this.  Not small at all in fact, with a sort of grown up version of the Euston Tap's bar, complete with American style taps at the back, a few seats and high tables and a lot of brickwork.  It felt cavernous, but all the same, I reckon when a bit more full, it will have quite a decent atmosphere.  As an observation, it could probably do with some posters or other such artwork on the walls too, to break up the expanse of brick a bit.

I said "we" in the first paragraph and the we in this case was Tyson the Beerhound with a small but devoted bunch of his acolytes.  Down from the grim North to part with their brass in exchange for exotic Southern beers, they had a cheery determination about their day out in Smokely.  They had seen off Kernel and Partizan and the day was still young.  We filled the place up a bit, but oddly there was two different stag parties that wandered in.  Why two such sets of  hedonistic adventurers should choose to wander around a deserted Cannon Street is a mystery, but there they were all the same.  Some were even choosing from the beer list, no doubt having a well earned break from Kopperberg with shooter chasers. 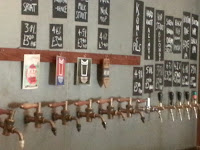 Ah yes beer.  Pretty similar in line up to the Euston Tap, with Bristol Brewing leading the cask offerings and around a dozen keg beers also available.  Quality, as you'd expect from the ET mob, was universally high.  Proper conditioning and temperature to the fore - that's what I like to see.  I had Moor Nor’ Hop which wasn't that cloudy and tasted pretty damn good and a drop of Adnam's Fat Sprat, also very good.  At least I think it was Fat Sprat.  Must take notes. E pronounced her Jever to be up to snuff too. Unlike the ET, there are rather substantial toilets on the same level, so that's all good, though I do hope they are kept clean when it is busier.  A bit of general tidying up and the odd mopping would not have gone amiss, but early days.

Overall?  More a bar than a pub, but it still gave a great first impression even when very quiet.  You can't say fairer than that.

I understand the food offering when it comes will be pizza forward.    Pelt Trader, Arch 3 Cannon Street, The City, London, EC4N 6AP

Yes, more of a bar than a pub and a little sparse on our last visit. But I shall be there again in a day or two and will check it out again.

AFAIK the name is a reference to the livery hall of the Skinners’ Company which is across the road and actually there once was a pub there called the Skinners Arms.

Have to have a look next time we're there -- a bigger version of the Euston Tap sounds ideal, and also means I'll have somewhere interesting to suggest when friends want to meet in the City.

(PS. Remember when you used to describe ours as an 'interesting Londoncentric blog'..?)

You should do Tand and Tyson beer tours for tourists & blog fans. Sort of a Club 40-60 piss up.

be interesting to see if they keep open on Saturdays for long, as that area of London is predominantly Mon-Fri officeworker based only,and lots of the other pubs and sandwich/coffee shops that thrive in that area choose not to open, or do very limited hours, at the weekend because of the lack of trade.

dont know, always good to see a new pub, and certainly add it to the list of venues to hit next time Im down that way, but Ill probably try during the week just to be sure its open :)

When you feel like quitting think about why you started. (y)
imarksweb.net