Seething? No. Just One Grumble


Seething Lane.  There's a name to conjure with. Samuel Pepys, he of the diary lived there and worshipped in the tiny St Olave's Church which is still there and well worth a look as it is rather old, though reconstructed after partial destruction by German bombing in 1941. Pepys is buried there.  The area is a typical London mix of new and old and it is in the new that the latest Draft House incarnation, Seething Lane has appeared. 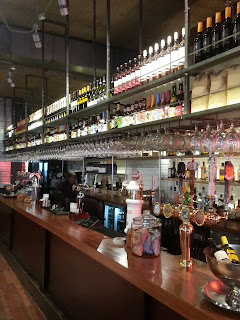 Now readers of this blog will know that Draft House Tower Bridge is quite near my London flat. Well a fifteen minute walk away and it is a place that impresses in every way except for this writer at least, the quality of its cask beer.  I still go there on occasion and always ask for a taste of whatever is on -  sadly, that doesn't work out - the triumph of hope over experience rarely does - so I drink something from Camden or the like. You see, I do like the place, so I accept it for what it is. A lovely place, but not one I like to drink cask in.  The new Seething Lane is even nearer to my gaff and is in an area I know well.  It has a few decent but uninspiring pubs, some better than others and we spend a bit of time there.  It needs a new and brash neighbour to help up some games. So is the new Draft House man enough for the job?  Well, yes and no, but mostly yes. 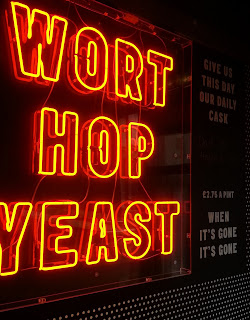 Firstly from an unprepossessing exterior - it is under a modern glass building - you step into an American Brewpub style interior of considerable size and with an immediate "wow" factor.  It is a big space with a long impressive bar on your right, an open kitchen at the back and various booth and table seatings.  It has brash neon, stainless steel, wood, leather, exposed pipework and more and it works brilliantly. Someone with flair, panache and a great eye for design has conjured a contemporary, modern, but comfortable eating and drinking space out of what was I understand, an old Post Office.  So top marks for that.  The food, typical Draft House Fare, looked tasty and appealing, though we didn't eat and service was attentive, but it was a quiet Monday evening.  It would be good to see how that all stacks up on a heaving Friday.  One small niggle. The music is described by the Draft House itself as "background."  On a very quiet Monday night it was anything but, causing a need for raised voices.  Is that a tactic to create atmosphere?

But Dear Reader, I was there for the beer, so what can be said about it?  Beer wise there is something for everyone.  Around fifteen tall fonts dispense a pleasing selection of local and foreign craft keg beers and there are four handpumps too, plus an extensive bottle list.  The barman couldn't have been more helpful and pleasant and tasters were offered.  E stuck to keg and I had tasters of two cask beers (tasters often tell you little) before deciding to play safe with a pint of Dark Star Hophead, which was, sadly, more than a bit warm and flabby.  I switched promptly to a couple of halves of keg which were fine, though to be honest, E's Camden Seven Hop could have been colder too - it seems to be a company trend - but maybe it is just teething troubles as it is after all, early days.  I do hope so. I can't see why a new venue such as this would have anything but the most modern of cooling systems.

Overall?  I liked it a lot.  We both did in fact.  I am looking forward to seeing it at full tilt, with loads more people and the beer turning over quickly. Either way, I'm sure it will be a roaring success and handy as it is, we'll certainly be back for drinks and next time, eats.  I will though be approaching the cask beer with a certain amount of wariness, but, as always, with hope.

We came directly from the Holborn Whippet. Great chat and service from Kirsty and excellent cellar temperature cask beer.
Posted by Tandleman at 15:00

Why didn't you devote a post to that one, then? Talk about accentuating the positive...

Well I wasn't reviewing the HW. It was, if you like, a case of compare and contrast- and only a mention.

And I'm not a believer in "cheery beery".

Temperature is a funny old thing.
I have never ever liked St Austell Proper Job with its " powerfully hopped " slogan.
Whenever I've drank it the beer has usually been either just cool or at room temperature without a head on it and haas always scored high on my meh-ometer.
Last week I had it on draught in a pub in Ireland with a good head on it served at stout/lager temperature and it was delicious.
Just saying.

I know what you mean - "wow this beer is awesome/this pub is amazing" posts get pretty tedious. I've never heard of the Holborn Whippet, though, & would have liked to hear more about it for future reference.

"...American Brewpub style interior of considerable size and with an immediate "wow" factor..."

Modesty prevents me from posting my review of the Whippet, but you can read what TM thought of it here
http://tandlemanbeerblog.blogspot.co.uk/search?q=holborn+whippet

Warm and flabby is why god invented "super chilled"

The past paeticiple of seething is sodden.

I still don't know anywhere you can get craft keg beer.

Not that I'm complaining!